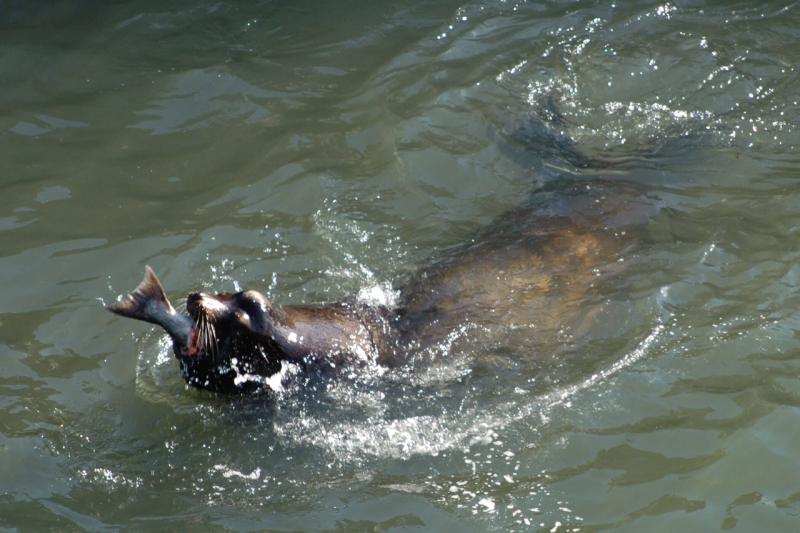 States and tribes can remove California and Steller sea lions from a management zone on the Columbia River and its tributaries where they prey on at-risk salmon, steelhead, lamprey, sturgeon, and eulachon, under a new authorization by NOAA Fisheries’ West Coast Region. 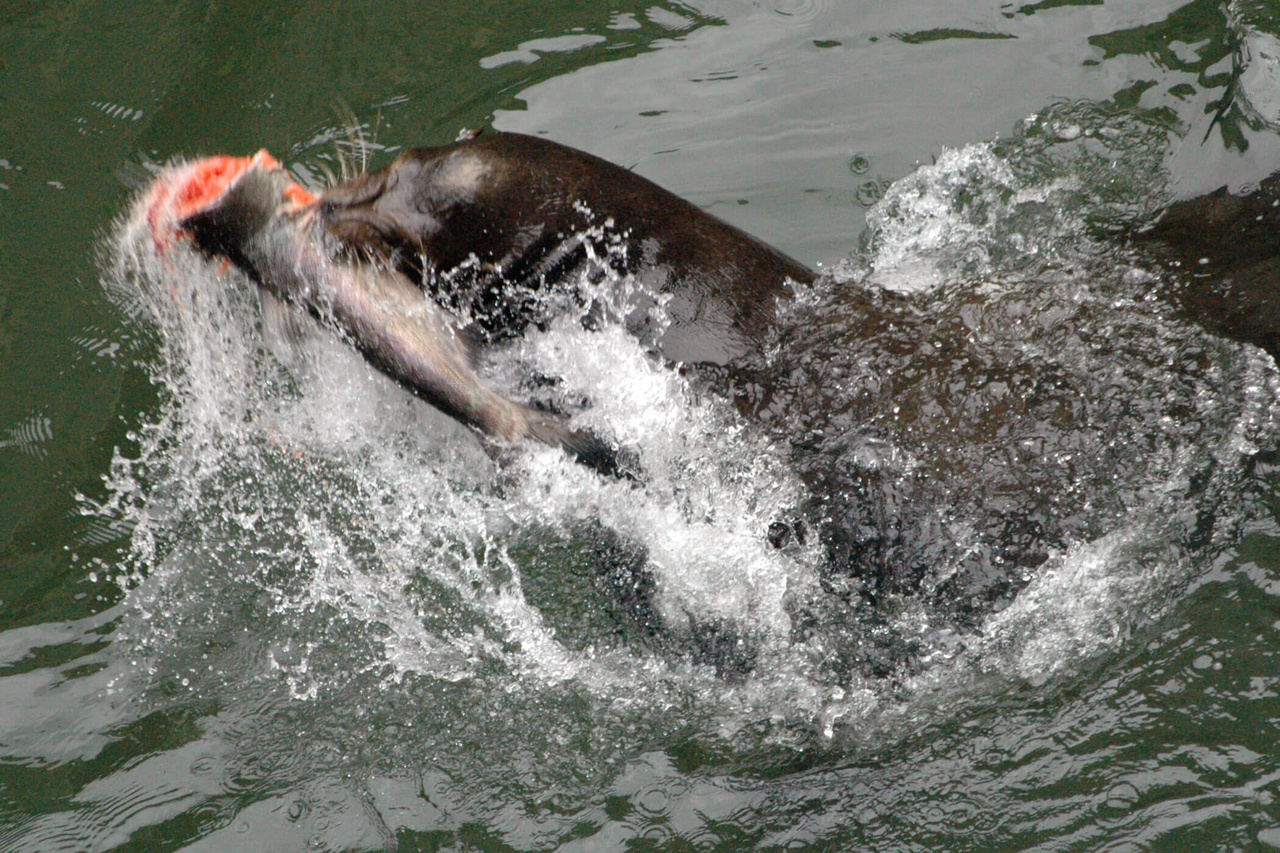 Top and above right: Sea lions consume salmon and steelhead at Willamette Falls on the Willamette River south of Portland. Credit: Oregon Department of Fish and Wildlife.

The approval provides more flexibility in managing sea lion impacts on salmon and steelhead. For the past two decades, the growing issue of sea lion predation in the Columbia Basin has been closely monitored. Management solutions have adapted to address it. Under Section 120 of the Marine Mammal Protection Act (MMPA), thousands of threatened and endangered salmon and steelhead have been protected from predation.

The Endangered Salmon Predation Prevention Act amended the MMPA in 2018. It allowed removal of sea lions from a stretch of the Columbia River between the I-205 bridge on Portland’s east side and McNary Dam. The amendments also allow removal of sea lions from tributaries of the Columbia River below McNary Dam with spawning habitat of threatened or endangered salmon or steelhead.

Sea lions prey on adult salmon and steelhead migrating upriver from the ocean to Bonneville Dam, Willamette Falls, and other tributaries to the Columbia River. That is a crucial point in the salmon life cycle, after the salmon have survived the ocean but just before they return to their home rivers to spawn.

“This is one element of a comprehensive strategy that also addresses impacts at dams, hatcheries, and through harvest,” said Chris Yates, Assistant Regional Administrator for Protected Resources in the West Coast Region. “Removing sea lions is not anyone’s first choice, but this provides the states and tribes flexibility to manage these impacts.” 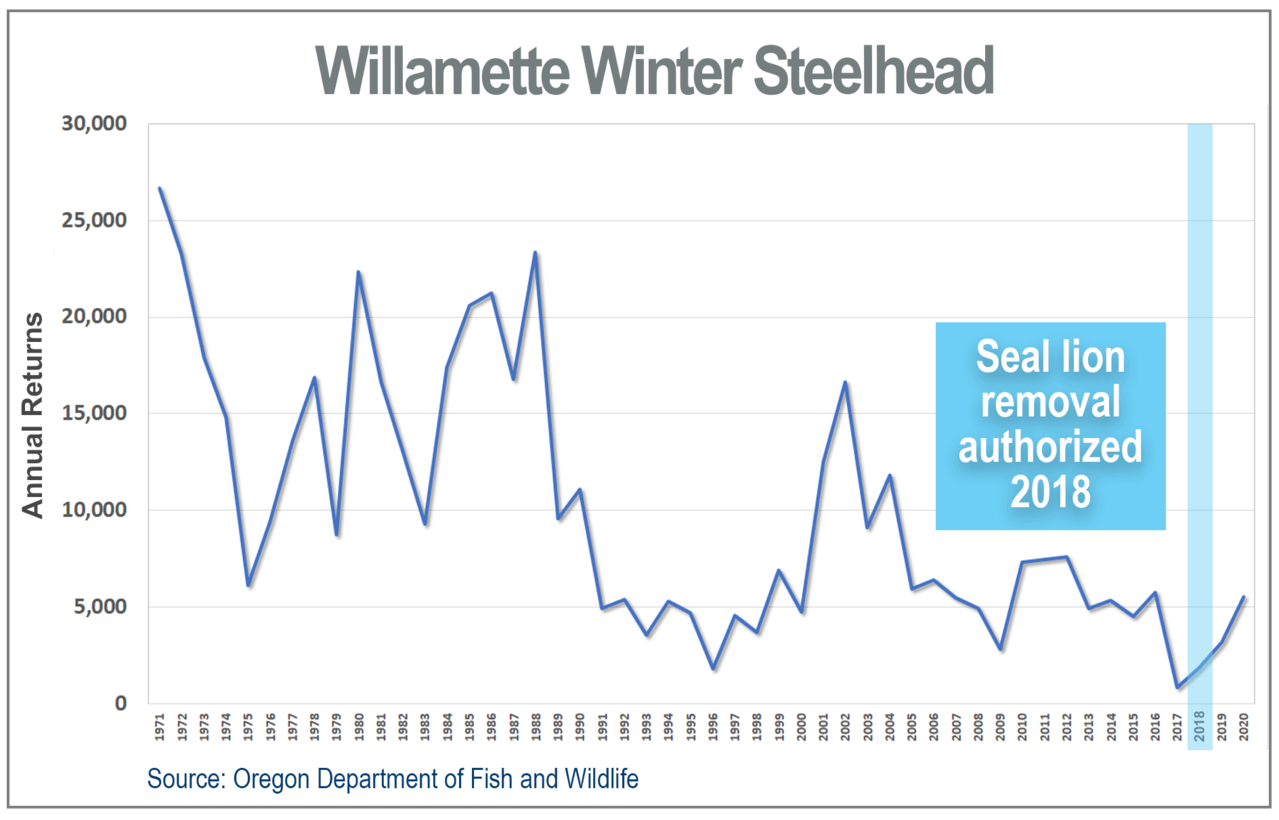 Applicants for the authorization were:

The authorization allows for removal of up to 540 California sea lions and 176 Steller sea lions over the next five years. The numbers are based on:

Unless a zoo or aquarium is interested in taking the sea lions that are removed, they are humanely euthanized.

Bounties and market hunting once drove California sea lions toward extinction, but they rebounded under the protection of the MMPA, now numbering more than 250,000. The eastern stock of Steller sea lions has also increased over the last decade to more than 70,000 animals.