For Pollock Surveys in Alaska, Things Are Looking Up

To help estimate fish populations, scientists experiment with seafloor-mounted sonar systems that monitor fish in the water column above. 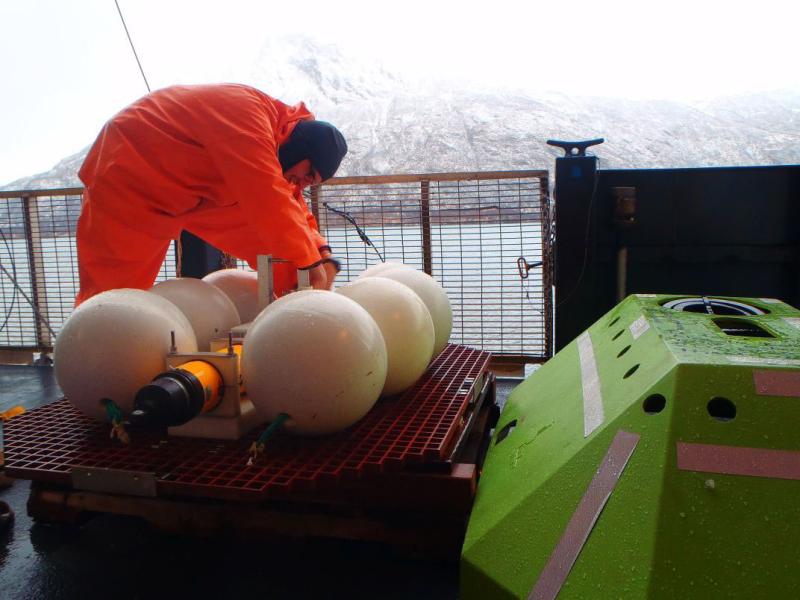 Shelikof Strait, in the Gulf of Alaska, is an important spawning area for walleye pollock, the target of the largest—and one of the most valuable—fisheries in the nation. This year, a team of NOAA Fisheries scientists went there to turn their usual view of the fishery upside-down.

Scientists have been conducting fish surveys in the Shelikof Strait for decades. They do that in part by riding around in a ship and using sonar systems—basically, fancy fish finders—to see what’s beneath them. But in February of this year, scientists moored three sonar devices to the seafloor and pointed them up toward the surface. The devices have been recording the passage of fish above them ever since.

Because underwater devices cannot transmit data in real time, the sonar systems have been storing their data internally, leaving scientists in a state of suspense since February. But suspense turned to satisfaction last week when, working in cooperation with local fishermen aboard a 90-foot chartered fishing vessel, scientists retrieved the moorings from the bottom of Shelikof Strait.

First Attempt With a New Technology

“This was a first trial,” De Robertis said. “We’re still developing the technology to see how well it works.”

Whether moored on the bottom or carried by a ship, the sonar systems that scientists use work the same way: they emit a ping that echoes off the fish (and anything else in the water column). Based on the strength of the echo, scientists estimate the number of fish in the water. Those estimates are used when setting sustainable catch limits.

“Usually we estimate how many fish we have by reading the acoustic echo off their backs,” said De Robertis. “In this case, we’ll be reading the echo from their bellies.”

But unlike shipboard sonar, moored sonars are stationary, so the tricky part is choosing the right mooring locations. De Robertis, along with NOAA Fisheries colleagues Chris Wilson and Robert Levine, have analyzed 20 years of survey data to select the three locations used in this study, which they hope will prove representative of the larger Shelikof Strait area.

If the technology works, scientists could use it to augment traditional, ship-based surveys. In addition to using sonar, those surveys also involve catching a sample of fish with a trawl, which produces information on the age, size, and physical condition of the fish. However, those surveys offer only a snapshot of what’s happening in the water during the time of the survey. In years when the fish aggregate earlier or later than usual, the ship-based surveys might miss some of the action.

The experimental sonar system, on the other hand, records over long periods—3 months long in the case of the experimental deployment in Shelikof Strait.

“This will give us a new window on what fish populations are doing over time that we wouldn’t be able to get any other way,” De Robertis said. Scientists will just have to get used to the fact that the window is upside down.

Last updated by Office of Communications on December 30, 2020