Habitat survey teams are fanning out across the Columbia River Basin this month, measuring the fine details of Northwest rivers and streams as part of an ambitious NOAA-led initiative to assess and track the condition of salmon and steelhead habitat. 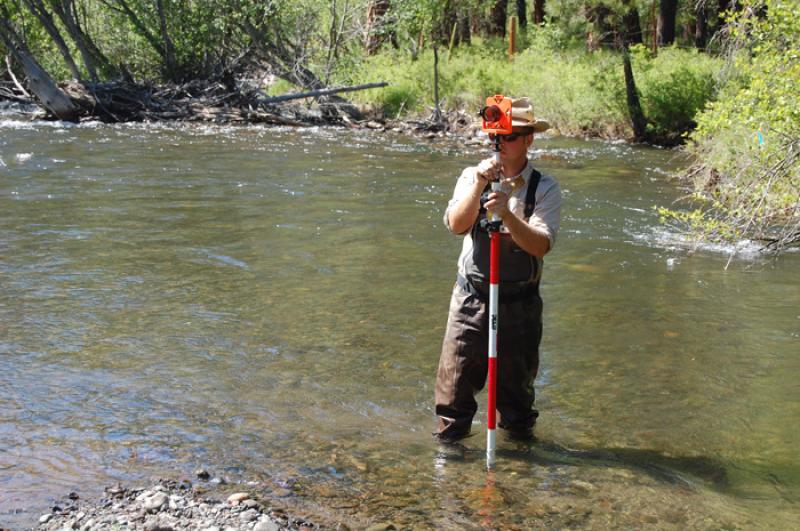 Habitat survey teams are fanning out across the Columbia River Basin this month, measuring the fine details of Northwest rivers and streams as part of an ambitious NOAA-led initiative to assess and track the condition of salmon and steelhead habitat.

The regional effort, called the Columbia Habitat Monitoring Program, or CHaMP, maps river and stream reaches down to the millimeter and gauges conditions down to the size of gravel, number of pools, and degree of shade. The information will help biologists track trends in habitat quality over time, assess the benefits of habitat restoration, and identify changes most likely to benefit fish.

"This channel may have potential to be better habitat if you add some wood to it," Chris Jordan, a research fish biologist at NOAA's Northwest Fisheries Science Center, explained to a group of CHaMP trainees along Catherine Creek in Eastern Oregon in June. "This is the kind of question that the data will help us answer."

Jordan leads the cooperative program, now in its fourth year. CHaMP is one of the most intensive regional efforts to collect detailed stream data. The program is designed to standardize a set of habitat monitoring methods across the entire Columbia River Basin, providing an important and necessary contribution to managers working to recover endangered fish runs across the entire basin. It is funded primarily by the Bonneville Power Administration and includes survey teams fielded by states, tribes, and other organizations.

A June training camp in Cove, Oregon brought more than 100 CHaMP survey crew members together to learn and practice the data collection methods they will use at the hundreds of preselected sites during the summer. Each crew includes three people: two use survey equipment to map the underwater contours of streams and the surrounding terrain, while the third measures other attributes important to fish, such as water temperatures and turbulence.

Crews transmit their data daily to a cloud-based computer network that checks it for consistency and allows biologists to track the work of each crew and the program overall. The compiled data, and the trends it reveals, will help researchers evaluate habitat improvements designed to mitigate the impacts of federal hydroelectric dams on the Columbia and Snake rivers on salmon and steelhead listed under the Endangered Species Act. A NOAA Fisheries biological opinion governing operation of the dams calls for detailed monitoring to assess the progress of habitat restoration.

Combining the habitat data with information on fish numbers and growth should help biologists more clearly understand what kinds of habitat are most important to fish survival and productivity and how the habitat could best be improved.

Since the program's inception, crews have surveyed more than 300 sites each year, focusing on about 16 watersheds selected for their diversity and importance to listed salmon and steelhead populations. Many of the sites are also located near habitat improvement projects. This year, crews will re-survey some of the sites, some of which include restoration work, allowing scientists to overlay data to assess whether any changes have occurred within the given stream reach since the prior survey.

The program also dovetails with a series of Intensively Monitored Watersheds, which are rivers and streams that scientists are studying in detail to better understand the relationships between fish and their habitat.

A key strength of CHaMP is the detailed elevation data collected at each site with survey equipment. Crews measure the precise elevation at anywhere from 600 to 1,200 individual points at each site, which can be combined into detailed three-dimensional maps of the stream bottom and surrounding floodplains. Comparing the maps from year to year reveals how erosion and deposition changes stream channels in ways that influence how fish use the reach.

That may help biologists better gauge the habitat characteristics that support salmon spawning, for instance, which could in turn guide habitat restoration to promote spawning.

"We're really trying to take a powerful technology and deploy it on a large scale," Jordan said. "We've tried to develop a system that allows us to gather a lot of important data very quickly."