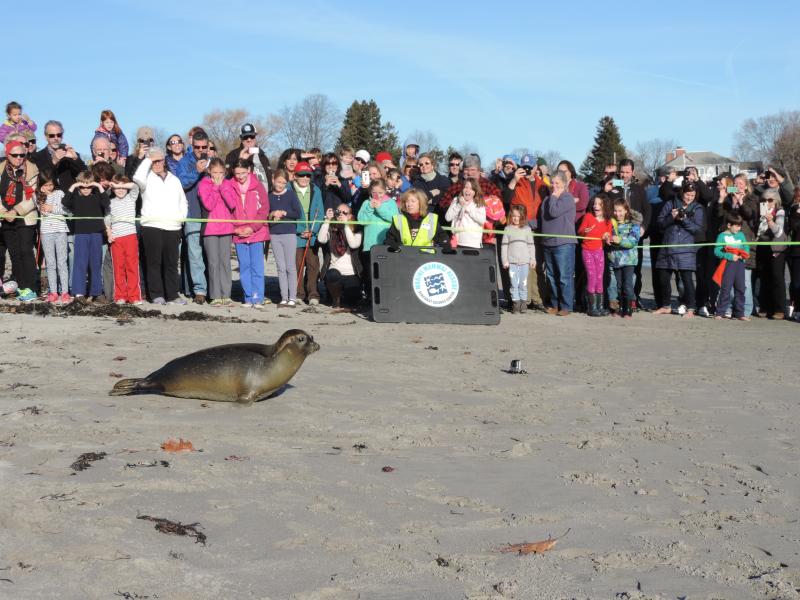 In 2001, Congress established the John H. Prescott Marine Mammal Rescue Assistance Grant Program to assist in the rescue and recovery of stranded marine mammals across the country. Prescott grants allow our National Marine Mammal Stranding and Entanglement Network partners to better respond to marine mammal strandings, improve capacity, and conduct scientific investigations into the causes of stranding events. Since 2001, the program has awarded more than $71.2 million through 843 competitive grants. Awardees hail from 26 states, the District of Columbia, two territories, and two tribes. Check out the accomplishments of six past recipients of Prescott Grant funding.

The Makah Tribe have called Neah Bay in coastal Washington their home for thousands of years. Since the Prescott Grant Program’s founding in 2001, the Makah Tribe have received five grants for their marine mammal conservation projects.

These grants have helped improve marine mammal stranding response on the Reservation and educate the public. Due to Prescott Grant funding, the Tribe can perform stranding responses more quickly, which improves outcomes for stranded marine mammals. In cases of reported mortalities, staff conduct necropsies and collect tissue samples to investigate the cause of the stranding. The grants also supported stranding response training for two Makah tribal members, one of whom became the Tribe’s Stranding Coordinator.

Cal Poly Humboldt, a Hispanic Serving Institution in the California State University System, has been a recipient of five Prescott Grants. Cal Poly Humboldt’s Marine Mammal Stranding  Program is located in Arcata, California and operates in the ancestral and current lands of five northern California tribes. The program’s mission is to document and respond to stranded marine mammals along 240 miles of rugged and remote coastline in northern California. Every month, over the past 10 years, 25–30 Humboldt students have systematically surveyed the coastline to improve our understanding of stranding patterns in the area. This baseline data improves stranding predictions and provides an early warning signal for marine mammal health issues that can be precursors to Unusual Mortality Events.

The northern California coastline is rugged and remote with a small and widely dispersed human population. With Prescott support, the Cal Poly Humboldt Marine Mammal Stranding Program has been able to develop and sustain a multifaceted approach to stranding response. It has not only increased our understanding of stranding patterns, but has helped to build a resilient, inclusive and collaborative community of coastal stewards.

Hawaiian monk seals are only found in the Pacific Islands and are one of the most endangered seal species in the world. Conservation efforts are essential and one of the species’ strongest advocates is The Marine Mammal Center. In 2013, the Center received an Emergency Prescott Grant to build Ke Kai Ola or “Healing Sea,” a hospital and visitor center for malnourished or injured Hawaiian monk seals. This grant also supported the construction of multiple facilities on the Island of Hawai’i, including two rehabilitation pools, a medical lab, and an education pavilion.

At Ke Kai Ola, the Center’s experts rehabilitate Hawaiian monk seals suffering from a variety of health issues including:

Since 2014, the Center has successfully rehabilitated and released 38 seals back to their ocean home in partnership with NOAA Fisheries. NOAA researchers recently confirmed that at least two of those seals have gone on to have pups of their own, a critical boost to ongoing conservation efforts.

While the hospital is not open to public visitation, the Center conducts outreach to educate the public about Hawaiian monk seals and the threats they face. As of June 2022, 30 percent of monk seals are alive thanks to conservation initiatives led by NOAA and partners like The Marine Mammal Center.

The Sun’aq Tribe of Kodiak is one of 10 federally recognized Alutiiq tribes of the Kodiak Archipelago. Alutiiq people have lived along the shores of the Alaska Peninsula, Kenai Peninsula, and Kodiak Archipelago for at least the past 8,000 years. Since 2018, the Sun’aq Tribe have been a member of the Alaska Marine Mammal Stranding Network, responding to strandings and participating in carcass surveys. In 2019, 2020, and 2022 the Sun’aq received Prescott Grants to increase the timeliness and availability of resources for marine mammal responses, including the purchase of transportation to help reach more isolated stranding sites.

The Tribe is also an important partner in the ongoing 2019 Gray Whale Unusual Mortality Event. While a cause of the UME has not been determined, the Sun’aq Tribe is a reliable partner in the investigation exploring possible causes and monitoring beaches for whale strandings. For example, Tribe biologists and NOAA Office of Law Enforcement officers monitor the coast of Kodiak Island and smaller islands through collaborative aerial surveys.

The Atlantic Marine Conservation Society, located in Hampton Bays, New York, is the lead response organization for conducting necropsies on all dead marine mammals in New York. As a six-time Prescott grant recipient, they have used the fundings to support strandings, collect data, and increase education programs. Part of their program includes the Specially Trained Animal Response Team which provides assistance to partners during critical events and manages a mobile response trailer.

In addition to active response for stranded marine animals, the Atlantic Marine Conservation Society fosters collaboration between local stranding network partners and fellow conservation organizations. In 2018, they received a grant to support collaborative response and training programs on how to conduct effective large whale necropsies. They continue their collaborative efforts by sharing stranding information with partners to develop comprehensive profiles of stranded mammals. In doing so, the wider stranding network gains a better understanding about the causes of marine mammal strandings including several ongoing Unusual Mortality Events including the North Atlantic right whale UME and the humpback whale UME.

The Sarasota Dolphin Research Program is based at Mote Marine Laboratory in Sarasota, Florida, and operated by the Chicago Zoological Society. It conducts the world’s longest-running study of a wild dolphin population, centered around the long-term resident bottlenose dolphins in Sarasota Bay. The program has received several Prescott grants, which support critical cetacean rescues in Florida, as well as offering post-release monitoring services throughout the country.

The program was founded by Blair Irvine and his assistant Randall Wells in 1970. The team has decades of experience in bottlenose dolphin behavior, social structure, health, and the impact of humans. Their work focuses on the approximately 170-member Sarasota Bay dolphin community, which consists of residents spanning five generations, and includes individuals up to 67 years old. Their detailed record of dolphins’ lives is crucial for detecting trends in populations relative to environmental changes. Research approaches developed or refined in Sarasota Bay improve our understanding about dolphins in other marine areas throughout the world, including Bermuda, Cambodia, Argentina, Brazil, China, and Greece.

The program has trained hundreds of American and international veterinarians, scientists, and students, along with stranding network and law enforcement personnel. It has taught them skills to safely handle and tag dolphins for interventions. The program began using electronic tags in 1975 to track dolphin movements and behaviors, and has worked to reduce their size and increase their effectiveness, as well as develop new methods of tag attachment for free-swimming individuals. They also use digital acoustic archival tags to study communications. Today, the program is a model example for dolphin studies around the world. The Sarasota dolphins are used as a reference population to compare at-risk dolphins in other locations.

Last updated by Office of Protected Resources on January 24, 2023