What are microplastics and why are researchers looking for them in whale feces? 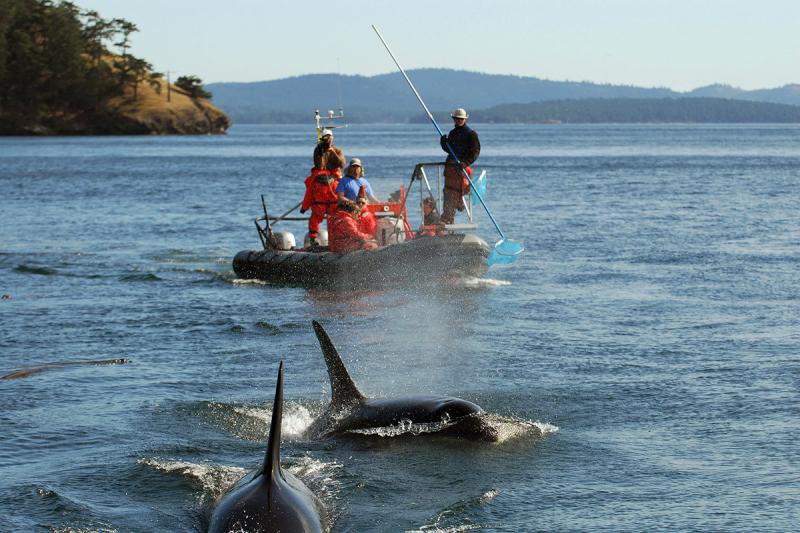 You might worry about your toddler chewing on a plastic toy with toxic chemicals. Some orca researchers are beginning to worry about whales ingesting a gut full of microplastics, and what that might mean for their health.

Microplastics are everywhere. Millions of tons of plastic enter our oceans annually, and much of it breaks into tiny pieces. Microplastics are plastic particles five millimeters (about two-tenths of an inch) or smaller. They represent 92 percent of plastic pieces polluting the oceans’ surface waters. Researchers have found microplastics in all major seas and oceans. They’ve also found them in the intestinal tracts of organisms at all levels of the ocean food chain, from zooplankton to fish to marine mammals.

Some scientists are concerned that microplastics and their toxic effects are bioaccumulating in killer whales, the oceans’ top predators. Endangered Southern Resident killer whales spend much of their summers in Puget Sound and the Salish Sea. Chemical contamination from pollution, particularly in young whales, is one of three primary threats to their population. Could microplastics be part of the problem?

A team of scientists with NOAA Fisheries’ Northwest Fisheries Science Center (Center) and the University of Washington have started an investigation. They are looking at what microplastics the Southern Residents are ingesting, at what scale, and whether the whales are being exposed to toxic chemicals associated with microplastics. 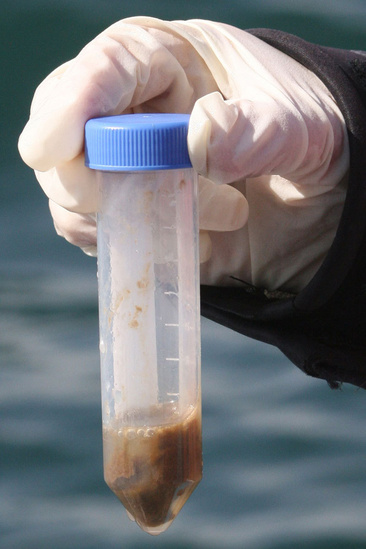 For this pilot study, Center Research Geneticist Kim Parsons and her colleagues are finding and classifying microplastics in killer whale feces. The scientists are using their “poop archive.” The archive holds hundreds of killer whale fecal samples collected between 2006 and 2018, mostly from Southern Residents. They’re stored in a lab at negative 80 degrees Celsius. “We have a lot of poop sitting in the freezer, ready for more analysis,” says Parsons.

Whale researchers with the Center collected the fecal samples. They were out following the Southern Resident whales (at a safe distance so as not to disturb them) to gather the remains of salmon that the whales feast on. The researchers were collecting scraps of fish to learn more about the whales’ prey. But if they saw or smelled orca poop—stinky, with a hint of rotting fish—they would scoop that up as well in their long-handled nets. The fecal samples have proved valuable for an array of studies. They help with everything from genetic analyses of the whales and their prey fish, to examining the killer whale gut biome, to new areas like microplastics.

For the microplastics pilot study, the scientists dried out a subset of the largest fecal samples in a lab oven for up to 48 hours. They removed the remaining biological matter with hydrogen peroxide, and then began to isolate and identify what was left—bits of plastic. Parsons and her NOAA Fisheries colleagues collaborated with researchers in Materials Science and Engineering at the University of Washington. They used an ultra-high-powered Raman microscope to classify the microplastics by polymer type.

Parsons explains that they won’t be able to determine exactly where each piece of microplastic came from. It could be a plastic bag or water bottle, a fiber from a fleece jacket run through a washing machine, or a fishing net. “But we do know which typical human products are associated with each polymer type that we’re identifying,” she says.

So far the researchers have found a lot of fibers and a variety of very small microplastic particles. Final lab results later this year will give a first indication of which broad categories of plastics are most prevalent in the whales’ digestive system.

How do microplastics end up in killer whales? Read Part 2 to find out.