When oil spills occur, time is of the essence for responding to marine mammals. A Deepwater Horizon restoration project is gathering information to plan for better response activities during, and restoration after, future disasters. 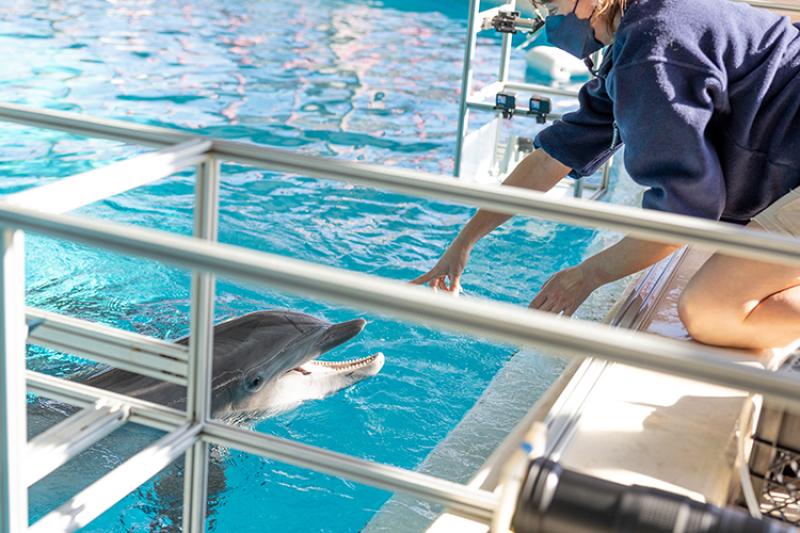 When the Deepwater Horizon oil spill occurred in 2010, scientists and oil spill experts thought marine mammals such as dolphins and whales would avoid the oil. This turned out to not be true. Daily life for these animals, known as cetaceans, involved swimming through floating slicks as they surfaced to breathe.

In the immediate wake of the oil spill, more than 1,000 dolphins died. Assessments of the damage after the spill found that tens of thousands of marine mammals were exposed to the surface slick. This led to a constellation of illnesses, including lung disease and pneumonia.

Even today, very little is known about how marine mammals interact with oil spills. To effectively plan for response and restoration, and to identify ways to mitigate threats, scientists need a better understanding of how cetaceans are harmed by surface oils and dispersants.

Part of the Marine Mammal Disaster Response project, a Deepwater Horizon restoration project, is aimed at improving scientists’ knowledge of threat factors. Such factors include how particular thicknesses or qualities of oil pose different risks to marine mammals, or if there is a window of time after a spill where response activities are optimally beneficial.

The first phase of a three-part subproject recently wrapped up. It examined the dynamics of a dolphin’s breath at the surface to better understand how much floating material like oil may make it into the animals’ lungs. To collect this information, scientists took high-speed videos of dolphins doing what comes naturally to all mammals: breathing air. The video captured various types of inhalations and exhalations, and the droplets they created.

Watch the video and read about working with dolphins at Baltimore’s National Aquarium in a NOAA blog from March 2022.

The videos will inform the next phase of the study in 2023. Based on videos analyzed, Johns Hopkins University scientists will build a functional replica of a dolphin blowhole ,for further lab experiments. It will simulate “breaths” in controlled tanks of seawater with slicks of different types of crude oil and dispersant chemicals to understand the quantities of chemicals that dolphins may inhale.

Ultimately, the work will inform future restoration activities. Examples could include:

Filling in data gaps could also allow for recommendations of appropriate dispersants to use under certain conditions, or identifying exposure limits that correspond to expected health or population impacts.

Participants in this phase of the project include NOAA, Coastal Response Research Center, the National Aquarium, and Johns Hopkins University.

Last updated by Office of Habitat Conservation on January 02, 2023