To Tag a Sea Turtle: A Look Behind the Scenes

Ride along with scientists as they capture and tag sea turtles to get the information we need to protect these endangered species.

At the southern end of North Carolina’s Outer Banks, in a sheltered body of water called Cape Lookout Bight, scientists have set a 100-meter-long entanglement net. The net hangs in the water like a curtain, its top line marked by a row of colored buoys floating placidly at the surface. The scientists—a team of six from the NOAA Fisheries lab in the nearby town of Beaufort—stand on the deck of a skiff nearby, watching the buoys intently, alert to any sign of movement.

They don’t have to wait long.

“We’ve got a bobber,” declares Larisa Avens, pointing to a buoy bouncing in the water at the far end of the net. The skiff swings around and motors toward the buoy. Moments later, all six scientists lean over the side and start pulling the net in hand over hand.

A round shape soon emerges from the water—the shell of a loggerhead sea turtle, the eighth turtle captured that day. But while the other turtles were small enough to easily lift into the boat, this one is big, almost 300 pounds. The crew holds onto to him like a man overboard, but he’s too heavy to haul up.

“We’re gonna need some help with this one,” Avens says, reaching for her radio.

Capturing and Tagging an Endangered Species

Avens is a research biologist and sea turtle expert with NOAA Fisheries. She and her colleagues are at the Bight to capture and release two types of sea turtles: loggerheads, which in this part of the Atlantic are listed as threatened under the Endangered Species Act, and Kemp’s ridleys, which are endangered.

Avens is highly trained in handling these endangered species, and her team is operating under a federal research permit.

Their goal is to collect data on abundance, growth rate, sex ratio, and other variables during the seasonal aggregation of sea turtles at Cape Lookout Bight. The scientists also tag the turtles and, in some cases, attach satellite transmitters to track their movements.

But before you can collect data on a turtle, you have to get it into the boat. 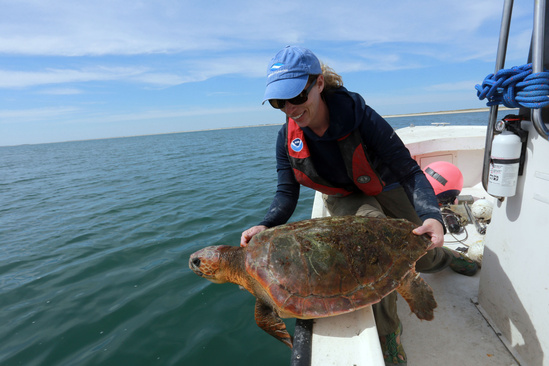 Bringing the Animal Onboard

Avens radios for assistance from another NOAA boat nearby. Soon an aluminum craft appears, one with a lowerable ramp at the front end, like the landing craft used at Normandy. As scientists hold the turtle near the surface, the larger vessel approaches with the ramp down, then slides the ramp under the turtle like a spatula slides under an egg. When the ramp rises, the turtle is safely onboard.

Avens jumps from the skiff onto the deck of the landing craft and, along with another NOAA biologist, April Goodman, quickly sets to work. They measure the animal’s carapace with a giant caliper, draw blood from a vein in its neck, and take a plug of skin from the edge of a flipper for DNA analysis.

Avens and Goodman also check the animal for tags but find none. Apparently, this is the first time the turtle has been captured. He has definitely had at least one prior run-in with humans, however. The tail end of his carapace is split like a hammer’s claw.

“Looks like he was struck by a boat,” Avens says. “A long time ago, to judge by the scarring.”

Vessel strikes are one of several threats that sea turtles face. They’re also at risk of being caught in fishing gear. To address that risk, NOAA Fisheries prohibits the use of gillnets at certain times and locations, requires large circle hooks in several longline fisheries, and requires that shrimp trawls carry turtle excluder devices.

For these conservation measures to be effective, we need to understand sea turtle biology and behavior, including migration routes and preferred habitats. So before releasing their captured turtles, Avens and Goodman tag the animals. Each gets two conventional tags—simple metal clips with stamped ID numbers— and a radio ID tag—similar to the microchips that owners inject into their pets. Finally, since relatively little is known about the movements of adult male sea turtles, all adult males are outfitted with a satellite transmitter. 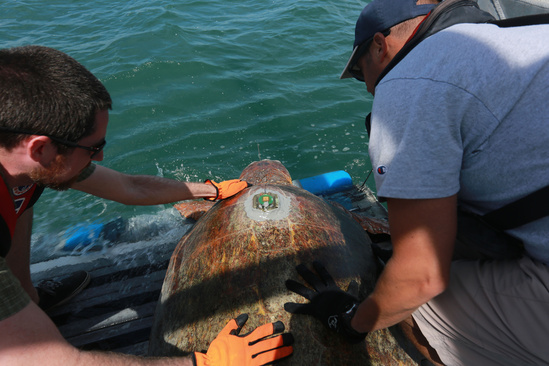 Scientists release a loggerhead sea turtle back into the wild. Photo: NOAA Fisheries.

Goodman gently sandpapers a small section of the shell and applies a layer of epoxy adhesive. Then, with the care of a jeweler setting a precious stone, she lowers a satellite tag into the bed of epoxy. The tag—a cell phone-sized device with a four-inch antenna—will likely fall off within six months. Until then, it will beam back location data every time the animal surfaces for air. 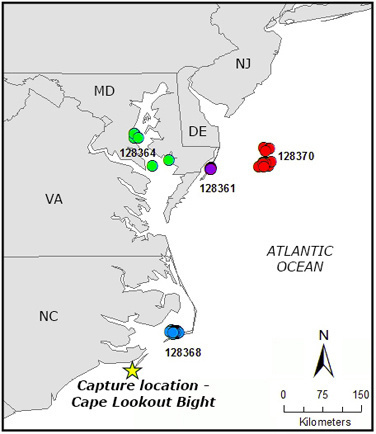 As the epoxy cures, the boat motors away, so the turtle can be released some distance from the net that caught it. When the ramp is lowered to the water, the turtle seems to sense that his moment has arrived. He shuffles forward, slips into the water, and disappears into the murk.

Meanwhile, back on the skiff, scientists are vigilantly scanning the buoys atop the net. For the moment, all is still. But soon a buoy will bounce, and the process will begin again.

During three-and-one-half days of fieldwork, Avens and her crew of scientists captured 41 sea turtles. All of the sea turtles were tagged, but only the adult males—four of them—were outfitted with satellite transmitters that allow scientists to track their migrations.