Research to protect threatened and endangered species at field camps in the marine national monument. 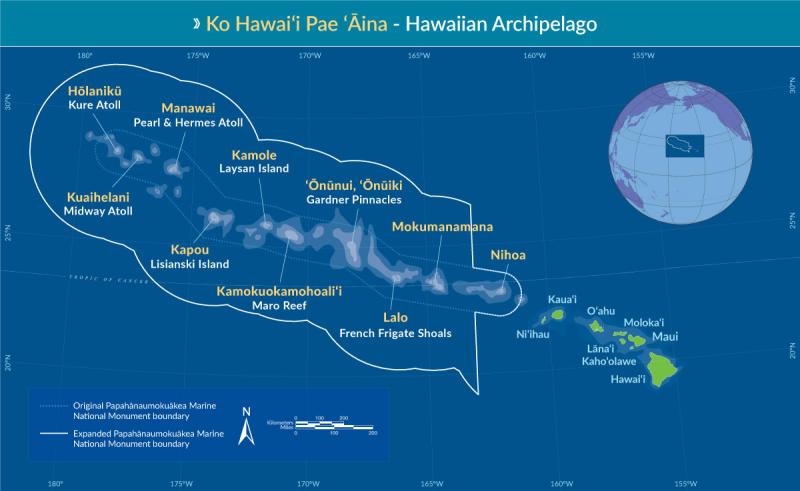 This map shows the Hawaiian Archipelago, the range of the Hawaiian monk seal. Within the monument, the English names of the islands are printed in white and the Hawaiian island names are in yellow. Credit: https://www.papahanaumokuakea.gov.

Field camps with teams of 3 to 7 biologists will be established at the following five sites:

Along the way, the Sette will stop for teams to survey Nihoa, Mokumanamana, and Kuaihelani (Midway Atoll).

After a short but productive 2021 field season, our 2022 field teams will spend about 4 months on the islands. The Sette will pick them up in August to return to Oʻahu in early September.

Sea Turtles in a Changing Climate

This year, the Marine Turtle Biology and Assessment Program will continue to investigate the resilience of the Hawaiian green sea turtle in the face of climate change.

Our biologists will build upon 2 years of research by collecting tiny samples from hatchling turtles on Tern Island, Lalo. In the fall, our researchers will examine these samples to measure the “primary sex ratio.” The sex of a turtle is influenced by the temperature of the environment around its nest. Therefore, this ratio is incredibly important to understanding how climate variability is changing the sex of these hatchlings over the years. Other populations of green sea turtles are already producing more females than males.

Our turtle researchers also continue to investigate whether Hawaiian green sea turtles are resilient to climate impacts on their nesting habitat. They have tagged ten fertile females in the main Hawaiian Islands to track their nesting migrations. Following the loss of their primary nesting island, East Island, to a storm in 2018, they will use these tags to see where the turtles nest. This annual research will help determine if these female turtles that previously nested on East Island will continue to attempt to lay “all their eggs in one basket” (East Island) or if they will adapt to the loss and lay their eggs on another island in Lalo.

The Hawaiian Monk Seal Research Program is excited to see what the 2022 field season brings. In 2021, we saw the population reach a milestone—growing to more than 1,500 seals rangewide. This means the population has grown on average 2 percent per year since 2013.

We credit the population’s growth in part to the life-saving interventions that our field research teams perform each year:

As we embark on the 40th year of this program, we will be positioned to understand how the species will respond to climate change. We may also detect emerging threats or stressors. Our vaccination program against morbillivirus is now in its sixth year. Having already vaccinated most of the adults in the population, the teams will prioritize weaned pups to maintain immunity throughout the population.

Last updated by Pacific Islands Fisheries Science Center on May 04, 2022