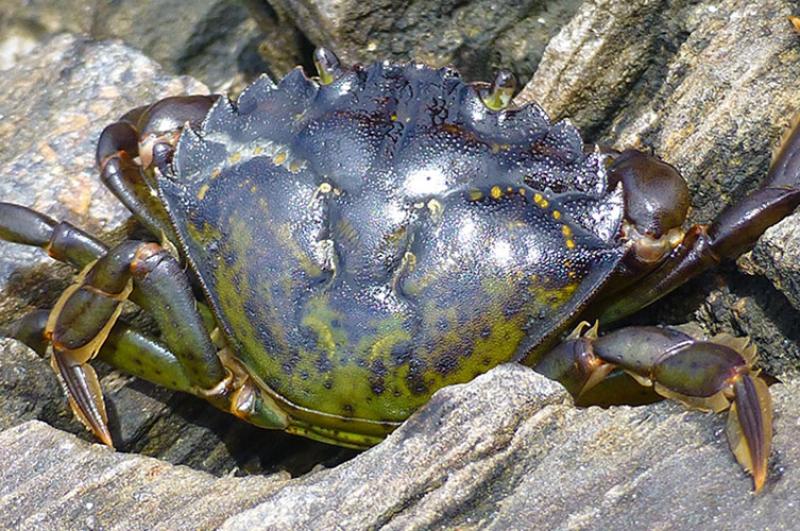 The archipelago of Haida Gwaii, off the coast of Prince Rupert in British Columbia, is very close to Alaska. The July discovery is the closest confirmed finding of the invasive crustacean since it was first detected in the San Francisco Bay area in 1989.

European green crabs were first introduced to North America in the 1800s, likely hitching a ride in the ballast water of merchant ships from Europe. Experts believe the invasive crab was transported to the West Coast in ballast water as well.

The green crab is considered one of the most invasive species in the marine environment. It has few predators, aggressively hunts and eats its prey, destroys seagrass, and outcompetes local species for food and habitat. It has been documented that European green crab devour juvenile king crab as well as juvenile salmon. They also destroy eelgrass habitat that larval fish use to hide from predators, and outcompete Dungeness crabs for food and habitat. The European green crab could potentially damage Alaska’s multi-billion dollar fisheries, especially for salmon, crab, and mariculture operations. Resource managers in Alaska have been keeping an eye on the invasive crab’s northward movement for years.

Thankfully, no European green crabs have yet been detected in Alaskan waters, but concerned Alaskans have been planning for the arrival of these voracious crustaceans.

“We had already formed partnerships to monitor for the European green crab, but the discovery of this species in Haida Gwaii made our study more relevant,” said Linda Shaw, invasive species coordinator for the Alaska Regional Office of NOAA Fisheries. “The fact that this invasive crab is moving ever closer to Alaskan waters gives some urgency to what we are doing.”

Shaw and Alaska Sea Grant Fellow Meredith Pochardt wanted to use a powerful tool called environmental DNA, or eDNA, to detect the possible presence of the European green crab in Alaskan waters. Deoxyribonucleic acid (DNA) is the molecule that contains the genetic code of organisms. The cellular material shed by organisms into the environment is eDNA. They would collect seawater from various locations around Alaska and test it for European green crab genetic material. This data would allow scientists to detect if the invasive species has moved into Alaska’s waters.

Shaw and Pochardt facilitated several meetings in the spring to plan for an eDNA European green crab monitoring project that would occur during the summer. They coordinated with invasive species researchers from Washington State and British Columbia on a monitoring design for trapping combined with eDNA water sampling.

Shaw and Pochardt used  a habitat suitability model for the European green crab based in ShoreZone—a geomorphic and biological mapping system—and by consulting experts and partners. The Alaska Department of Fish and Game supplied five Fukui fish traps to be used alongside water sampling to collect eDNA.

But then, the pandemic hit. With mandatory travel restrictions, their plans for an inaugural eDNA project to monitor Alaskan waters for the European green crab was blown out of the water.

Fortuitously, NOAA Fisheries scientists at the Alaska Fisheries Science Center’s Auke Bay Laboratories had been discussing using eDNA to address a variety of research questions. One issue was how the nearshore predator community may change in response to salmon hatchery releases. They intended to conduct the research at Little Port Walter Research Station near the southeastern tip of Baranof Island, which includes a Chinook salmon research hatchery. The projects were still in the planning phase. News of the European green crab monitoring project, however, provided the needed push to obtain the necessary eDNA equipment.

Through their partnership with the Alaska Department of Fish and Game, Shaw and Pochardt were able to assist  scientists at the Alaska Fisheries Science Center in obtaining the needed equipment. Scientists would then collect the eDNA water samples needed to monitor for the invasive European green crab using the protocol Shaw and Pochardt developed.

“This collaboration was very proactive and timely, and a win-win for everyone,” said Charlie Waters, a NOAA research fish biologist at the Alaska Fisheries Science Center. “eDNA is a fingerprint. We can use it to address  research questions for a variety of organisms, such as detecting presence/absence of particular species and also potentially estimating their abundance. You can tell what is in the water at a particular location at a particular point of time. We hope to use eDNA for this project and many others.”

Delays caused by weather and limited staffing during the pandemic created some challenges. Waters and his research partner Dave Nicolls were finally able to set the traps at the research station in late October. They let them soak for 24 hours before retrieving them.

When Waters and Nicolls pulled the traps, they discovered sculpins and Pacific cod, but no European green crabs. They cannot rule out the presence of the invasive crab until the eDNA is examined.

“Anything in the water sheds cells, and the DNA in those cells are unique to particular species,” said Waters. “We collect the water from a single location at a single time. We then filter that water for cells, and then store the filter and take it to the lab to examine for eDNA to detect the presence and possibly the abundance of various organisms.”

Although Waters and Nicolls were only able to conduct one round of sampling, they are hopeful they can continue their efforts next season.

“It went surprisingly well for a pilot run,” said Waters, “We hope to establish a regular monitoring program next year for this and other projects.”

The genetics program at the Alaska Fisheries Science Center will run analysis on the filters for eDNA.

Shaw and Pochardt also coordinated with the Metlakatla Indian Community to monitor for the European green crab in 2020. Metlakatla is a small community of about 1,500 people located on Annette Island, just north of Dixon Entrance that marks the Canada-U.S. border. Metlakatla truly represents the frontline for European green crab monitoring as they spread northwards through British Columbia towards Alaska.

In addition to sharing their scientific protocol, Shaw and Pochardt also sent Fukui fish traps provided by ADF&G to Metlakatla. The community conducted three sampling events at two locations, Sawmill Creek and Tamgas Harbor, before the end of September. No European green crabs were caught.

The 2020 sampling effort will provide valuable baseline data on European green crab presence in Southeast Alaska. Positive eDNA results without physical specimens will be reported to the Alaska Department of Fish and Game invasive species program. They will likely require additional steps to confirm, such as additional monitoring for live crab specimens.

Any capture of live European green crabs will be reported to the Alaska Department of Fish and Game invasive species program as well. Response options could include continued monitoring, expanded monitoring, and expanded targeted trapping.

Planning is already underway to continue monitoring for this voracious invasive species in 2021. Concerned residents in Metlakatla are scouting additional monitoring locations on the opposite side of the island near Muddy Point. Shaw and Pochardt are examining data sheets and coordinating with scientists at the Alaska Fisheries Science Center. They are preparing for a full sampling season next year from April to September.