Depressed survival likely to decline by another 80 percent, projections show. 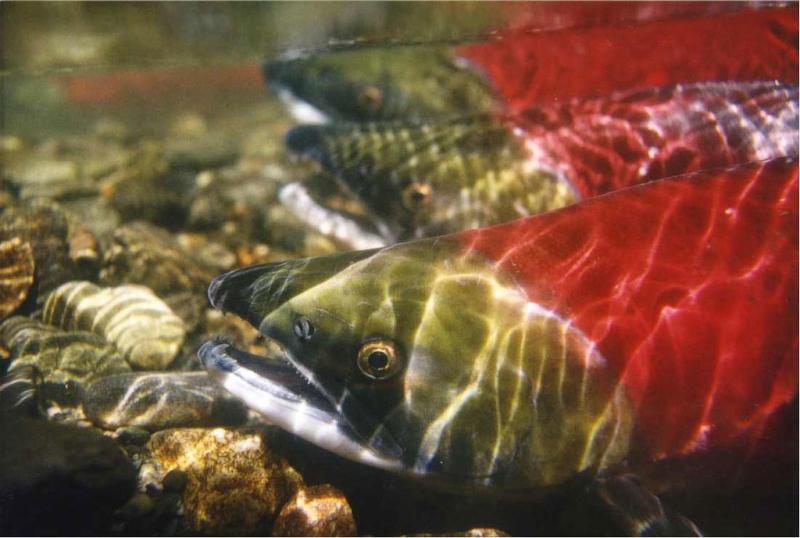 The warmer regime will likely reduce the survival of highly endangered Snake River sockeye salmon by about 80 percent from its already low levels. In recent years, only a few hundred Snake River sockeye have survived their annual upstream journey from the ocean to the mountain lakes where they spawn in Central Idaho.

That number is greater than the single-digit returns recorded in some years in the 1990s. However, survival is likely to fall sharply as temperatures rise in the coming decades, according to the new NOAA Fisheries research published this week in PLOS ONE. Sockeye salmon are especially vulnerable to temperature changes because they migrate upstream during the hottest part of the summer.

The study is the first comprehensive assessment of climate change impacts on the crucial upstream migration of adult Snake River salmon. It accounts for likely advances in arrival timing at Bonneville Dam and faster travel time through the river system of hydroelectric dams. It also looks at juvenile transportation history in addition to projected changes in temperature and flow.

“We knew sockeye were in the bullseye because of when they migrate, and the reality of what they face is stark,” said Lisa Crozier, lead author of the research team based at NOAA Fisheries’ Northwest Fisheries Science Center in Seattle. “If there is a silver lining, it’s that we see this coming, and we have a chance to think about the options.”

The research found that the largest changes in temperature and flow affecting Snake River sockeye would occur in the free-flowing section of the Salmon River. That area is upstream of the Columbia and lower Snake River’s federal dams. That means that changing the operation of the hydrosystem would not solve the problem, the scientists wrote.

At the same time, the disappearance of wild Snake River sockeye populations has eliminated much of their capacity to adapt to environmental changes. Most Snake River sockeye juveniles now come from the Springfield Hatchery in Idaho. The hatchery is scaling up the production of smolts to increase the number of returning adults. However, the population still has low genetic diversity because it fell to such low numbers in the 1990s.

Researchers analyzed the survival of more than 17,000 Snake River spring/summer Chinook and sockeye salmon since 2004, comparing the conditions in 2015 to climate change projections. They found that projected climate change would reduce the survival of Chinook salmon upstream of the first dam to the spawning grounds by 4 to 15 percent, depending upon the climate scenario.

The impacts on migrating adult sockeye during the hottest part of the summer would be far more extreme, the research showed. Sockeye already have a much lower survival than Chinook. Anticipated declines in snowpack would increasingly leave the river too low and warm for many fish to survive.

“We can expect many more years as warm as 2015 [in the lower Columbia River], but in the future, abnormally high temperatures will likely continue throughout summer rather than abating as they did in 2015,” the scientists wrote.

The researchers pointed to reducing flow diversions and other habitat actions that reduce temperatures in the migration corridor as possible mitigation measures. These changes may offer the best hope of maintaining tolerable temperatures and flows in the mainstem Salmon River.

In 2015, the Idaho Department of Fish and Game transported returning adult sockeye salmon by truck from Lower Granite Dam to the mountain lakes of Central Idaho. The Lower Granite Dam is the uppermost federal dam on their migration route.

The problem is that most of the sockeye in 2015 died in the overheated river before they reached Lower Granite Dam, where they also encountered a fishery targeting upper Columbia sockeye. To avoid these major sources of mortality, fish would have to be transported from locations closer to the ocean, such as Bonneville Dam.

Ultimately, however, earlier migration might be the only solution for a natural sockeye run.

The researchers urged river managers to pay more attention to river temperatures and flow and develop a coordinated management plan to address declines in flow and increases in temperature. Cooler water refuges in the river systems may help both Chinook and sockeye salmon by providing safe “stepping stones” for them as they migrate upriver, researchers said.

“Further work exploring habitat restoration or additional mitigation actions is urgently needed,” the scientists said, as “climate change will likely become an increasing challenge over time for summer and fall Chinook as well as sockeye.”

Last updated by Northwest Fisheries Science Center on May 18, 2021