Wind Influences Pollock Success in the Gulf of Alaska 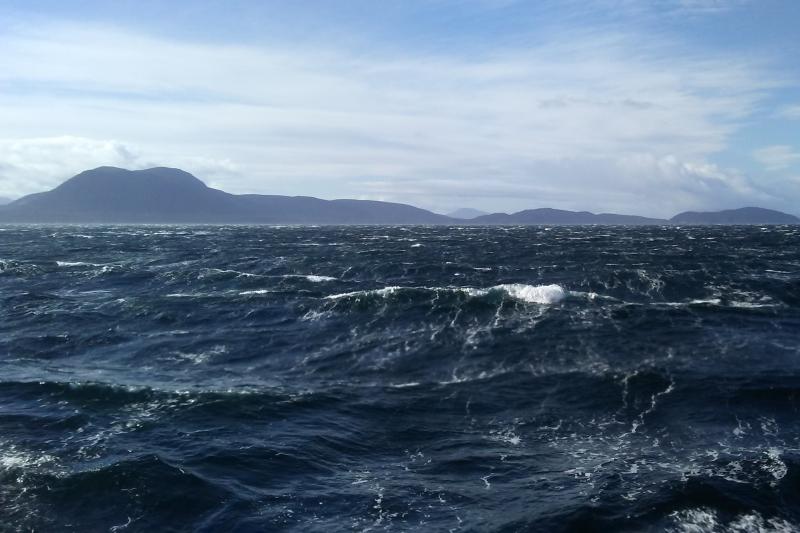 For young Alaska pollock in the Gulf of Alaska, survival may depend on which way the wind blows.

A study conclusively shows for the first time that year-to-year variation in the geographic distribution of juvenile pollock in the Gulf of Alaska is driven by wind. Depending on wind direction, water movement may retain juvenile fish in favorable nursery habitats, or transport them away. Young fish that are transported to less favorable habitats are less likely to contribute to year-class strength— the abundance of adults available to the valuable Gulf of Alaska pollock fishery.

“When we began this research, scientists thought that lots of juvenile fish would mean a relatively strong adult year-class. But in some years our surveys found a lot of juvenile pollock, followed by a weak year class. In other years a high number of juveniles grew into a strong year class,” Wilson said. “We undertook this research to better understand why large numbers of juveniles do not always translate into a high abundance of adults.”

Wilson and co-author Ned Laman also observed that the geographic distribution of juveniles was highly variable from year to year. In some summers, a very large proportion of the juvenile population was far southwest of the main spawning grounds.

“In this study we asked: what is the cause and consequence of year-to-year geographic variability in the distribution of juvenile pollock in the Gulf of Alaska?” Wilson said.

The results revealed a clear answer.

“Wind is the culprit,” said Wilson. “The consequence is that when a large proportion of the juvenile population is transported to the southwest, many of those fish are likely lost from the Gulf of Alaska.”

Alaska pollock supports the nation’s largest commercial fishery by volume. It is  widely recognized as one of the best managed and most sustainable fisheries in the world.

NOAA Fisheries has successfully managed Alaska pollock for decades using an ecosystem-based approach. Managers make decisions based on stock assessments and forecasts that incorporate a suite of environmental variables. The better scientists understand the influence of environmental factors on pollock, the better they can predict and prepare for future change.

”Our study provides new insight into the importance of wind to pollock population dynamics,” said Wilson, who led the study. “The findings argue for including wind-driven surface transport along with other important factors like temperature, prey, and predation that have been used in stock forecast models. ”

Environmental factors that influence Alaska pollock survival during the first year of life are critical to determining how many fish will be available to the fishery as adults 2 to 3 years later.

Pollock mortality is extremely high during the first year. Variability in this enormous first-year mortality makes a big difference to adult abundance. For those fish that survive, the mortality rate drops dramatically after they reach their first birthday.

“Year-class strength is largely set by age one,” Wilson said.

During the first year of life, pollock are weak swimmers. They drift where currents take them. If water movement patterns change, the destination of juvenile pollock changes with them. Where they end up influences whether they will contribute to the adult Gulf of Alaska population.

The first evidence of the influence of transport on Gulf of Alaska pollock year class success was revealed by survey data from the 1980s.

In 1987, NOAA’s Fisheries Oceanography Coordinated Investigations program repeatedly surveyed the early life stages of Alaska pollock in the western Gulf of Alaska. That year a large cohort of Alaska pollock was spawned in Shelikof Strait. Within the first 6 months of life, many members of the cohort were transported far to the southwest.

In 1988, pollock produced another large cohort of juveniles. This time, many remained in the Shelikof area. That cohort recruited into an abundant adult year class.

“Those findings put the stake in the ground,” said Wilson. “We now had reason to believe that juveniles in the southwest were lost to the Gulf of Alaska population.”

But it wasn’t until 2013–2017 that a series of geographically extensive Gulf of Alaska biennial surveys provided the opportunity to investigate the relationships between wind, transport, and year-class strength.

In 2013, juvenile distribution was similar to that of 1987: an anomalously large abundance of juveniles was found in the southwest. In 2015, juveniles were relatively evenly distributed, but that was associated with the marine heatwave known as “the Blob.” In 2017, population densities were highest in the Shelikof and Kodiak regions.

“The extensive coverage of these surveys allowed us to determine the distribution of pollock over a wide area,“ said Wilson. “It was exciting to finally have the data to conclusively address our questions.”

Alaska pollock spawn in the spring in Shelikof Strait. Their eggs and larvae drift  southwestward. But where juveniles end up by late summer varies from year to year.

Wind is the primary driver of water flow in the western coastal Gulf of Alaska. Wind interacts with the rotation of the earth to move surface water at right angles to wind direction. This phenomenon is called the Coriolis effect.

In the coastal Gulf of Alaska, prevailing northeasterly winds move surface water toward the coast, where it is forced downward. This drives the downwelling pattern that is typical of the region.

Intermittently, northerly and westerly winds drive surface water away from the coast. Cold water rises from depth to replace it in an upwelling pattern. As surface water moves offshore, it meets the southwestward flowing Alaskan Stream.

Wilson and Laman observed that when downwelling-favorable winds prevailed during and after spawning, juveniles appeared to be retained in upstream habitat near the main spawning area around Kodiak Island. Those conditions were associated with high numbers of fish reaching age one.

When upwelling-favorable winds predominated during that time, juveniles were abundant downstream to the southwest by late summer. High abundances of larvae in those years did not translate into high abundances at older ages.

“Our findings underline the importance of wind-driven transport to the ecology of animals that make up the coastal ecosystem,” said Wilson. “Wind is a major force in so many fundamental ways. This is one more way that it is important.” 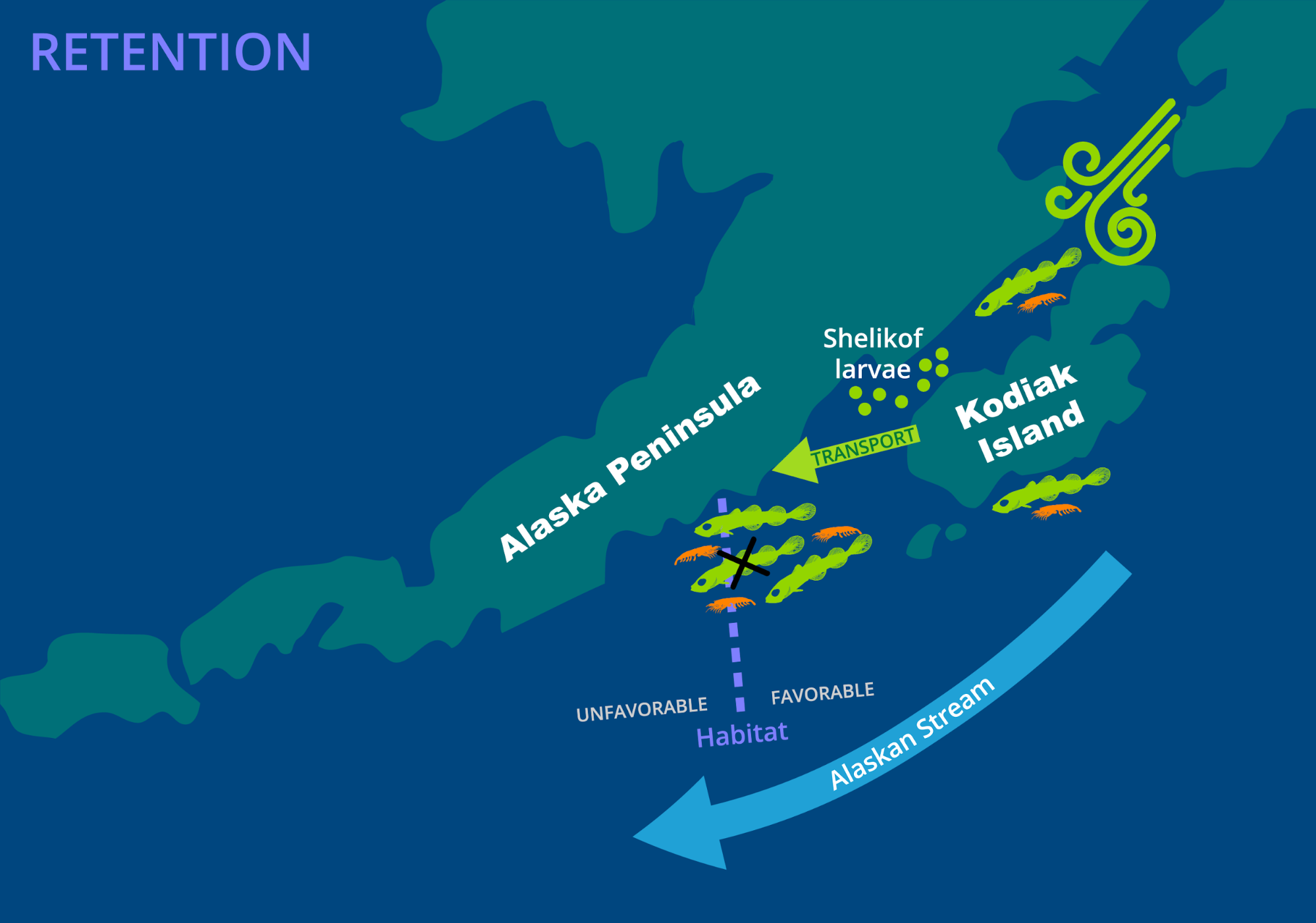 Wind-Driven Transport Interacts With a Mosaic of Habitats

“One way to lose fish from the Gulf of Alaska is export,” said Wilson. “The other is mortality.”

Some fish transported to the southwest may be swept entirely out of the Gulf of Alaska system. It is possible that they survive downstream in the Aleutian Islands or Bering Sea. But they may very well be lost to the Gulf of Alaska population.

Juveniles that are transported to the southwest also may have higher rates of mortality.

“The area around Kodiak and Shelikof has historically provided food-related benefits to resident young pollock. Juveniles there are larger for their age and fatter than their southwestern counterparts,” Wilson said. “But we lacked confirmation that this pattern was still current. That was the next piece we needed to understand.“

NOAA Fisheries biologist Jesse Lamb and zooplankton ecologist David Kimmel of the Alaska Fisheries Science Center are working to fill that gap. They are looking at the contribution of diet to the dramatic reduction of the 2013 year-class of juvenile pollock in the western Gulf of Alaska.

“In 2013 there was an anomalously high abundance of juvenile pollock in the southwest. The highest in years. The next year those fish were gone. Why?” said Lamb, “We tackled the question through diet work.”

“Our findings suggest that it is based on the spatial ecology of zooplankton,” Lamb said. “One key to survival for juvenile pollock is to reach a weight during summer that will help them overwinter. To achieve that, they need an abundance of high fat food.”

Lamb explains that very young pollock start on a diet of small copepods. As they grow, they graduate to eating large copepods, then euphausiids (krill), and finally fish. The availability of lipid-rich euphausiids during late summer is crucial.

Lamb offers a possible explanation for the rich abundance of euphausiids in the Shelikof-Kodiak Island area. “Euphausiids have been shown to associate with seafloor edges and canyons. There is a lot of that kind of topography around Kodiak. Plus, that area is enriched by influxes of oceanic water to the inner shelf.”

“Our findings, together with those of Lamb and Kimmel, suggest that year-to-year changes in wind-driven transport interact with a mosaic of habitat suitability to influence year-class strength,” Wilson said.

Final Pieces of the Puzzle

While this study focused on transport of juveniles, Wilson notes that wind has other direct and indirect effects.

For example, their colleague Steve Porter has shown that pollock larvae feeding is affected by wind-driven turbulence. His research showed that higher wind speeds can potentially be bad for their survival.

Wind may also indirectly affect juvenile pollock through its effects on the zooplankton prey field.

Wilson stresses the need to continue doing the kind of geographically extensive surveys that enabled this study. Such time series are essential to strengthen our understanding of the relationship between wind and pollock recruitment.

“We still don’t fully understand fine-scale mechanisms that link wind to how young fish are transported and dispersed,” Wilson said. “We believe that is key to understanding subsequent juvenile distributions. Together with information on habitat quality, that will help us solve the recruitment puzzle.”

For now, results of the current study provide a foundation to integrate transport and retention mechanisms into Alaska pollock stock forecasts.

“Wind-driven transport is likely to change with climate,” Wilson said. “Understanding how wind influences pollock dynamics will be essential for us to anticipate and prepare for future changes.”

Interannual variation in the coastal distribution of a juvenile gadid in the northeast Pacific Ocean: The relevance of wind and effect on recruitment