Harbor seals are back at our aquarium and we are ready for visitors. 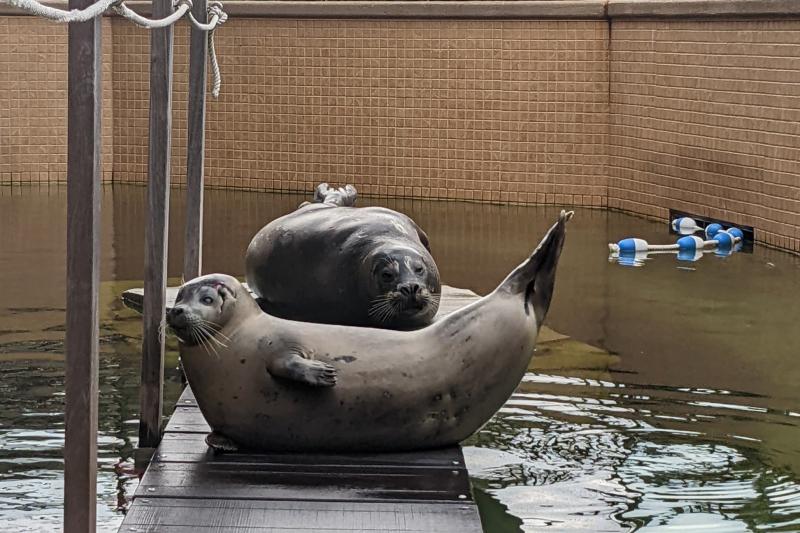 Harbor seals Kitt and Bubba hauled out in their pool at the Woods Hole Science Aquarium. Credit: NOAA Fisheries/Hannah Colwell

The NOAA Fisheries Woods Hole Science Aquarium will open to visitors Tuesday, July 5, with some new exhibits and the return of our harbor seals. The aquarium has been shuttered since March 2020 as part of NOAA's effort to help contain the spread of COVID-19.

“We are looking forward to welcoming visitors again,” said Teri Frady, communications chief for the aquarium, “but our hours will vary for a while."

For now, here are the days and times different exhibits will be open:

Frady cautions that if the Barnstable County CDC COVID community level is "high," then the outdoor enclosure will be open but the aquarium tours will be stopped until that level comes down. "Be sure to check our website or follow us on Twitter or Facebook to get the latest on operating hours," she said.

The aquarium is located at the west end of Water Street in Woods Hole, Massachusetts. There is no admission fee. Parking is limited in the village, so plan accordingly.

The seals at Woods Hole Science Aquarium are protected by federal law. Please follow all posted rules and respect our seal exhibit hours of operation while visiting the seal enclosure.

Our seals come with very different histories. Bubba, a 21-year-old male, was born at a marine park. He has lived most of his life with other seals at the Roger Williams Park Zoo in Rhode Island. Kitt, a female about 1 year old, was born in the wild, but taken into care after she was rescued following a terrible accident. Although she’s quite healthy now, she is blind.

“We have enjoyed some quiet time getting to know both Kitt and Bubba,” said Sarah Trudel, the aquarium’s curator and lead mammal trainer, “but we think they are now ready for visitors.” She noted that they have very different personalities. “Kitt, being a young seal, is active and playful most of the day and is bold and very inquisitive. Bubba is a gentle giant. He’s always eager to be with his caretakers, and has already offered us some laughable moments. These two are quite a pair!”

Kitt, the Little Seal that Could

In 2021, this very young seal was struck by a boat propeller, seriously wounded, and rescued off Kittery, Maine—which is how she came to be called “Kitt." She was taken into rehabilitation by Marine Mammals of Maine, a nonprofit organization that is authorized by the federal government to respond to stranded mammals and sea turtles. Because her injuries took her eyesight, Kitt could not be returned to the wild.

Despite her trauma, Kitt was known to her rescuers for her lively and inquisitive disposition. She was transported to her permanent home in Woods Hole in March. "We at Marine Mammals of Maine are thrilled for Kitt being able to have a forever home at Woods Hole," said Lynda Doughty, executive director of the organization. "She is special to us and it is a relief to know her care is in great hands."

Bubba, a Big Seal with A Big Heart

According to his keepers, Bubba brought joy to staff and visitors of the Roger Williams Park Zoo for more than 20 years. Although he spent most of his life in the company of other harbor seals, Bubba was mostly living alone in recent years as the zoo transitioned away from holding harbor seals. To ensure his long-term welfare, the zoo made a difficult decision: to rehome Bubba where he could thrive, living with a new companion, Kitt.

Weighing in at more than 200 pounds, Bubba came to his new home in May, traveling in a crate built for transporting a snow leopard. He was accompanied by his caregivers from the zoo. He has made the transition easily, is alert and eating well, and seems quite settled in his new home.

“While it was sad to see Bubba leave, we could not be happier with how well he is doing at Woods Hole Science Aquarium with his new companion and caregivers. The animal care staff at both facilities collaborated closely to ensure Bubba’s well being was always top priority,” said Amy Roberts, director of animal programs at Roger Williams Park Zoo.

What to Expect on Your Visit

At least twice daily, the seals have training sessions. These sessions include feeding, teaching and practicing behaviors that make them easier to handle and care for, and flat-out play time: just getting some exercise and stimulation. Their trainers will also take your questions. If training is not in session, you can still see Kitt and Bubba in the habitat, where they often play on their own or haul out to dry off and get some sun.

Why Does the Aquarium Have Seals?

Since the original permanent federal marine fisheries laboratory was built on this location in 1882, seals have been a popular attraction in the summer months. They were captured by laboratory staff in the summer and placed in outdoor, open, granite pools on the seawall. They were released back to the wild in the fall. The seals brought visitors to the facility that might not otherwise have come, and provided a great opportunity for scientists to talk with more people about their work.

In 1972, the Marine Mammal Protection Act conservation requirements prohibited the kind of capture for display that had previously been common unless specifically authorized by a permit. The aquarium then borrowed animals like Bubba from larger aquariums for the summer. These loans allowed those facilities to reduce animal care requirements during their busiest months. Amendments to the act in 1992 established the National Marine Mammal Health and Stranding Response Network. Most seals that have lived at the aquarium since then came from the stranding network. Typically these were animals that had recovered, but could not live in the wild, like Kitt. Beginning in the 1990s, the seals became permanent, rather than seasonal, residents of our aquarium.

These seals can live long and healthy lives at our aquarium, where they get constant caretaker attention, medical and dental care, and carefully monitored feeding. They are among the most popular residents of Woods Hole village. They are an excellent way for us to engage visitors who want to learn more about seals and the role they play in the ocean ecosystem. The seals also help us teach visitors what NOAA is doing to protect and conserve and protect marine mammals.