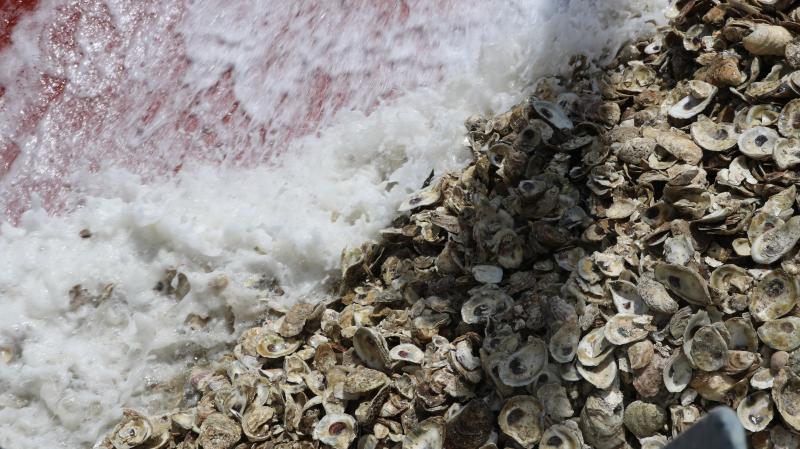 Experts wash oysters shells that have juvenile oysters attached to them—called "spat on shell"—off the deck of a barge and onto a reef restoration area. Photo: Oyster Recovery Partnership

It’s a lofty goal: Restore healthy oyster reefs in 10 Chesapeake Bay tributaries by 2025. But NOAA and our partners in the Chesapeake Bay Program are making solid progress toward that goal. Their effort includes several of the world’s largest oyster restoration projects.

Oysters help filter the water, and the reefs they grow in provide important habitat for commercially and recreationally important fish as well as other critters. But because there are only 1 to 2 percent of the reefs in the Chesapeake that once existed, NOAA and partners are restoring oyster reefs and populations to help bring back the benefits they provide to the ecosystem, people, and the economy.

NOAA science helps guide how much area must be healthy reefs in each tributary to be considered “restored.”

Since the effort began a decade ago, restoration in three tributaries has been completed: Harris Creek (348 acres of healthy reef) and the Little Choptank River (358 acres) in Maryland and the Lafayette River (80 acres) in Virginia. (Virginia also designated the Eastern Branch of the Elizabeth River, a “bonus” eleventh tributary that has been restored, in fall 2020.)

In the remaining seven tributaries, partners are at work on projects in various stages. Some are drawing close to the finish line, like the Tred Avon River in Maryland. Construction of new reefs has already happened this year. Partners will plant more than 200 million juvenile oysters onto the new reefs this summer. Virginia’s Piankatank River will see significant reef construction in 2021 that may be enough to qualify the tributary for completed status this year.

Other projects are in earlier stages. The “blueprints” to guide restoration in Maryland’s St. Mary’s and Manokin rivers were completed last year. Work to plant some existing reefs with young oysters started in both rivers this year.

In Virginia, higher salinities mean that oysters successfully reproduce at higher rates than they do in the less-saline waters of Maryland further from the Atlantic Ocean. Restoration in Virginia waters focuses on construction of reefs to give oyster larvae a hard place on which to settle to grow into reefs. In the Lynnhaven River, construction of reefs is under way (9 acres have been completed so far this year) and will continue into 2022. Reef construction is expected this year in the Lower York River and the Great Wicomico River as well.

The restored reefs will bring many benefits to the Chesapeake Bay. Oysters and the reefs they grow into create fish habitat, reduce nutrients, and generate larvae that can populate restoration reefs and other reefs as well. And cleaner waters and healthy habitats are good for people and the economy, too!