Seabirds are a vital part of marine ecosystems and valuable indicators of ecosystem health. Most of the 312 species of seabirds are protected by the Migratory Bird Treaty Act and some are endangered or threatened under the Endangered Species Act. 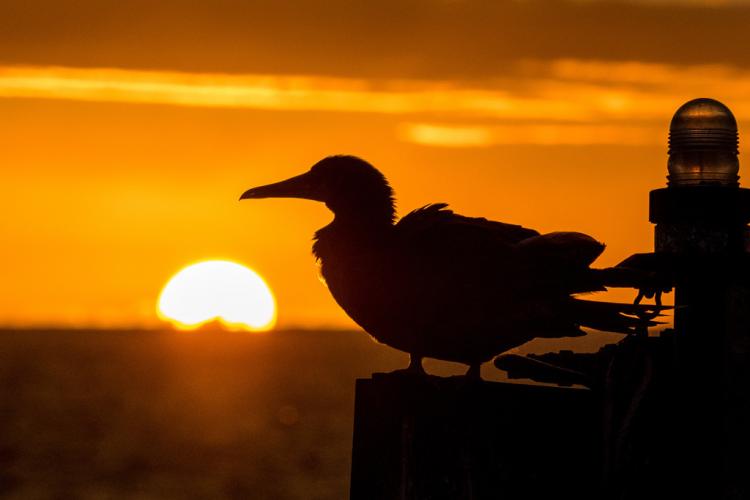 Bycatch, or accidental hooking or entanglement in fishing gear, is a common threat to seabirds. As a whole, bycatch is a complex, global issue that threatens our ocean ecosystems and their components, including seabirds. A number of statutes, strategic initiatives, and multilateral agreements direct NOAA Fisheries to include seabirds in our efforts to reduce bycatch.

Seabirds are attracted to fishing vessels and fishing operations—offal and bait can be tempting sources of “free food.” Unfortunately, this also means that they frequently get hooked or entangled in fishing gear, especially in longline fisheries. Most birds taken during longline operations are attracted to the baited hooks when the gear is being set, get hooked at the surface, and then dragged underwater where they drown.

For an endangered species like the Short-tailed Albatross, being accidentally killed in fishing gear can be a serious threat to the population. Depending on the geographic region, fishermen in the United States often interact with species of albatross, cormorants, gannet, loons, pelicans, puffins, gulls, storm-petrels, shearwaters, and terns, among others.

Learn how you can help seabirds

The National Seabird Program, lead by NOAA Fisheries, includes managers and scientists from across NOAA and its partners. We work domestically and internationally to protect and conserve seabirds. Our activities are guided by a number of statutes and agency priorities, and the program has two overarching goals:

Monitor and Mitigate Bycatch: NOAA Fisheries is directly responsible for monitoring and mitigating bycatch in U.S. fisheries and supports a variety of international agreements by International and Regional Fisheries Management Organizations to mitigate bycatch associated with non-U.S. fisheries.

Promote Seabirds as Ecosystem Indicators: Seabirds are excellent indicators of ecosystem status. As highly migratory, near-apex predators, they travel across trophic levels, space, and time, and are easily studied relative to other marine species. This makes them excellent sources of information for ecosystem-based fisheries management plans, a holistic framework for ensuring that our fisheries are sustainable.

The National Seabird Program has representatives who sit on various working groups and steering committees focused on national and international coordination of efforts to manage and conserve seabirds. We also partner with states and other federal agencies, including the U.S. Fish and Wildlife Service, U.S. Geological Survey, and the Department of State. We have representatives in all six science centers, all five regional offices, and at the national headquarters. The National Seabird Program is a nationally coordinated program that benefits from significant leveraging at the regional level.

Learn more about our accomplishments

The Alaska region has been actively addressing seabird bycatch in longline fisheries off Alaska since 1989. In previous years, more than 20,000 seabirds would become hooked every year in groundfish fisheries off Alaska alone. Seventy-five percent of birds hooked in Alaska are northern fulmars and gulls. However, most regulatory and conservation attention is focused on bycatch of the endangered short-tailed albatross. With the use of seabird avoidance measures (e.g., paired and single streamer lines), fishermen have reduced seabird bycatch by four-fold.

In the late 19th century, fishermen on the Georges and Grand Banks often used Shearwaters caught in nets as bait in handline fisheries. Although not a practice in use today, seabirds continue to have interactions with the commercial fishing industry, both directly and indirectly. A variety of seabird species inhabit the Northeastern Atlantic region.

In the Pacific Islands, pelagic longline fishermen based out of Hawaʻi must comply with seabird bycatch mitigation measures. These measures have reduced incidental interactions with seabirds, primarily North Pacific albatrosses, by more than 90 percent.

NOAA Fisheries estimates that the Hawaiian longline fisheries had 2,433 incidental interactions with albatrosses in 2000. Since the seabird mitigation measures became effective in 2002, albatross interactions have been about 10 times fewer per year.

Learn more about Seabird Interactions in the Pelagic Longline Fishery.

The West Coast Region uses mitigation measures to reduce seabird interactions in our fisheries and prioritizes research efforts to better understand seabird populations off our coast. While seabird bycatch is less common than in other regions, West Coast groundfish and highly migratory species fisheries have occasional interactions with endangered seabirds. A mix of mandatory and voluntary seabird bycatch mitigation measures have been used successfully to reduce the potential for incidental interactions with North Pacific albatrosses in particular. These measures include streamer lines for hook-and-line vessels, setting of gear at night, dyeing pelagic longline bait blue, and on-going research into ways to reduce interactions with wires on trawl vessels. Both the Northwest and Southwest Fisheries Science Centers conduct research on seabirds as important components of marine ecosystems. This includes distribution and abundance surveys, assessing seabird diet and productivity, and seabird bycatch in West Coast groundfish fisheries. Additionally, the Pacific Fishery Management Council convened an Endangered Species Act workgroup which addresses seabird bycatch issues.

Learn more about reducing seabird bycatch on the West Coast:

Seabirds spend much of their lives over the open ocean, returning to land only to breed and raise young. Because seabirds move across long distances, even across entire oceans, effective seabird conservation requires international cooperation. To help mitigate global seabird bycatch in fisheries, we work internationally through regional fishery management organizations and with countries that have vessels overlapping with seabird distribution to promote seabird conservation.

Although not a member, we actively participate in the Agreement on the Conservation of Albatrosses and Petrels. This is the only multilateral agreement that coordinates international activity to mitigate threats to albatross and petrel populations. Four species covered by the agreement breed on U.S. soil or forage in U.S. waters. They include the Black-footed Albatross, Laysan Albatross, the endangered short-tailed albatross, and the pink-footed shearwater. While albatross and petrels face threats both at sea and on land, interactions with fisheries are currently considered to be among the most serious. Although they can be caught in virtually any type of fishing gear, albatrosses and petrels are most often taken in longline fisheries.

Since 2001, the United States has improved research, outreach and education on, and domestic management of incidental seabird catch. This has…

Last updated by Office of Science and Technology on July 13, 2022