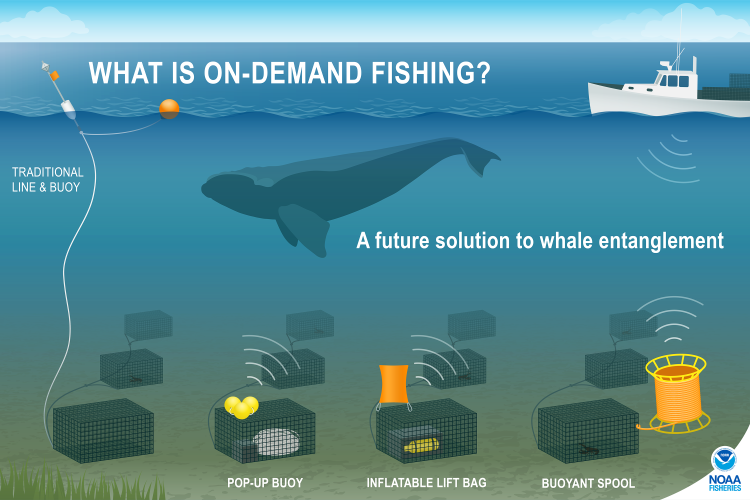 One serious threat to these whales is entanglement in fishing gear, often resulting in injury or death. Entanglements occur wherever fixed gear fisheries occur—it’s a global problem. In the Northeast, we are first focusing on reducing risks posed by pot and trap gear used to catch lobster and Jonah crab.

On-demand fishing technology eliminates the need for line connecting pot and trap gear to the surface of the water with multiple lines and buoys. Instead, the tethered surface marker is stowed with the rest of the gear on the bottom. It rises to the surface on demand, when the vessel sends an acoustic signal. Less line in the water means less risk of entanglement, fewer right whale injuries and deaths, and continued fishing in areas that might otherwise be restricted to protect whales.

Researchers, fishermen, and gear manufacturers are working on several types of on-demand systems. They have made significant progress in developing gear that works, and that can be located by the owner. Each manufacturer’s gear uses a unique approach for the vessel to communicate with the gear and chart its location. Until recently, users of one manufacturer’s gear system could not see the gear made by another manufacturer on their electronic charts.

One Solution: Viewing Gear in EarthRanger

The EarthRanger platform allows a user to see the location of any manufacturer’s gear securely in their cloud database. Fishermen upload their gear locations from a variety of apps and databases, and the positions are fed into the EarthRanger database. Users can access the EarthRanger platform and display information on their computer or mobile device. Each user is able to see all gear in their immediate vicinity—acting as a sort of “digital” surface marker—but cannot see gear that is farther away. Users also cannot see any additional information about the gear, including who owns it.

EarthRanger is a free platform developed to help protected area managers, ecologists, and wildlife biologists make more informed operational decisions for wildlife conservation. It was initially designed to monitor and track elephants and rhinos in Africa. Using it to track lobster trap/pot gear is a novel application of the software and one that could be adapted further for other fisheries and gear types. EarthRanger is a program of the Allen Institute for AI (AI2).

Our pilot project demonstrated that gear locations from multiple manufacturers can be brought together in a common visual display. That takes us one step closer to on-demand fishing.

The EarthRanger platform is currently blending data from:

All data are integrated in EarthRanger, and are viewable online in the EarthRanger website.  These data are also now visible in the Android version of the EdgeTech Trap Tracker application

The EarthRanger system will provide different levels of access to suit user needs.

All vessels, fishing or otherwise, could “see” gear deployed within 5 miles of their current position, but not any information on who owns it. This will help fishermen avoid setting other gear on top of on-demand gear or other vessels from accidentally pulling it up.

Individual fishermen could access all records of their own gear deployments at any time, including from the comfort of their couch. No other fishermen would have access to information associating a particular set of gear to the vessel that placed it.

State and federal authorities that oversee fishing operations could have full database access including all deployment locations and associated metadata.