A brief history of the steamer Phalarope, used on collecting trips in the 1930s. 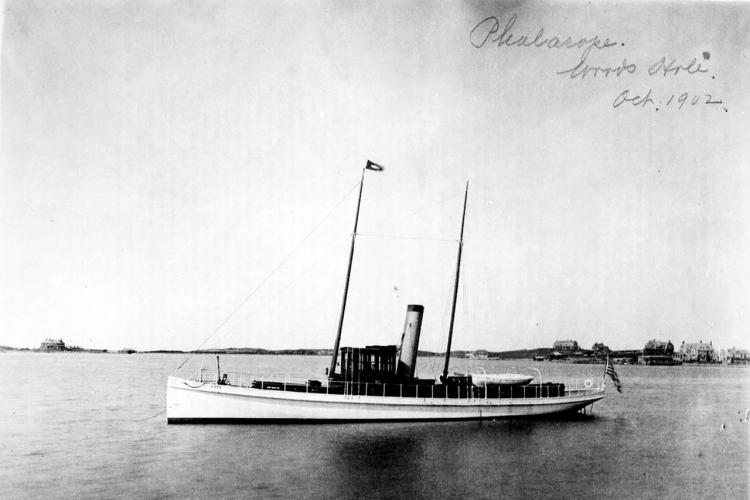 In the 1930s the working day at the Fisheries Laboratory usually started with a collecting trip to fish traps, or for dredging or taking plankton samples. The small coal-burning steamer Phalarope under the command of Capt. R. N. Veeder, was used for this purpose. Fisheries biologists and MBL investigators interested in making a trip were welcome. A group desiring to get aboard usually gathered by 9:00 a. m. at the Fisheries dock. Many persons wanted to watch the dredging or seining and were not concerned with obtaining the material. Robert A. Goffin, collector for the Fisheries Laboratory, and two fish culturists formed the collecting crew.

With the exception of long trips, which sometimes lasted the whole day, the Phalarope would return about noontime early enough for the participants to change and be ready for their luncheon, which was served by the MBL messhall sharply at 1:30 p. m. The collecting trip became so popular, especially when the weather was good, that the number of passengers on board had to be restricted to conform to safety regulations enforced by the Coast Guard. If something exciting happened during the trip, for instance the catch of a big shark or large moonfish, everybody would dash to one side of the vessel and cause a dangerous list. In later years, Capt. Veeder refused to take more than 20 persons aboard.

In addition to the material needed for research at the Fisheries and collected by the scientists themselves or under their supervision, the Phalarope brought live fish for the aquarium, which was open to the public every day of the week. The aquarium was operated by the Superintendent of the Station with the assistance of R. A. Goffin.