Get the latest updates from NOAA Fisheries on sea turtles in Hawaii and throughout the Pacific Islands region.

Sea Turtle Gets a Second Chance at a Long Life 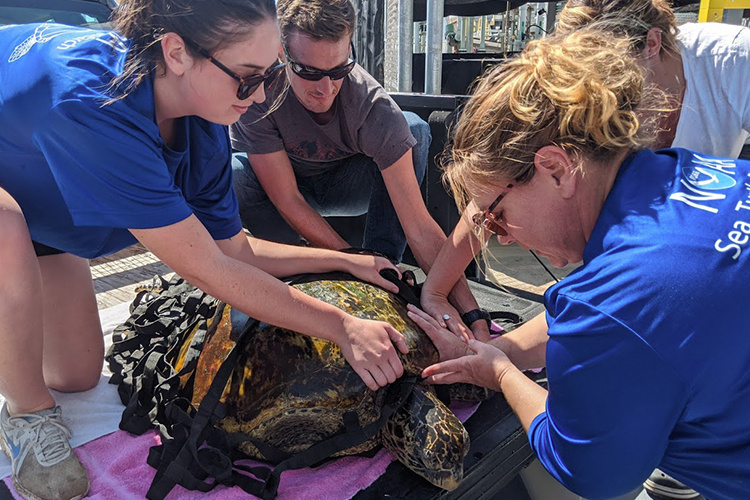 NOAA staff moving Hawaiian green sea turtle, #1036, before releasing him back into the wild.

As an important part of our island culture, fishing in Hawai`i brings families and friends together in common purpose and connection. But sometimes our fishing activities can have unintended consequences for curious reef-dwelling critters. Luckily, potentially unfortunate situations can turn around when people work together.

Such was the case when a large adult male Hawaiian green sea turtle (honu) was found with an injured flipper in Waialua. The public called the statewide marine animal stranding number, initiating a chain of actions to help the injured turtle.

Field responders with the Hawai`i Marine Animal Response, recognizing that the animal needed specialized attention, brought the honu to NOAA Fisheries for veterinary care. Our veterinary staff found the turtle had a monofilament fishing line deeply embedded into its front flipper,  requiring the appendage to be amputated.
The honu underwent two weeks of rehabilitation at the NOAA Daniel Inouye Regional Center under the care of the Marine Turtle Biology and Assessment Program. On January 30, 2020, we returned the turtle home to Waialua. Dr. Summer Martin, the programs’ leader, confirms that fishing gear-related injuries and deaths continue to increase.

“Our program has been monitoring the population since 1982,” Martin explains, “and monofilament line entanglement from coastal hook-and-line fisheries is currently the primary threat observed in sea turtle strandings in Hawai`i.”

The turtle has been marked with a temporary number—1036—etched on his shell. Waialua residents might see him swimming around. If you see him, please report the sighting (to RespectWildlife@noaa.gov) so we can keep track of his healing progress. 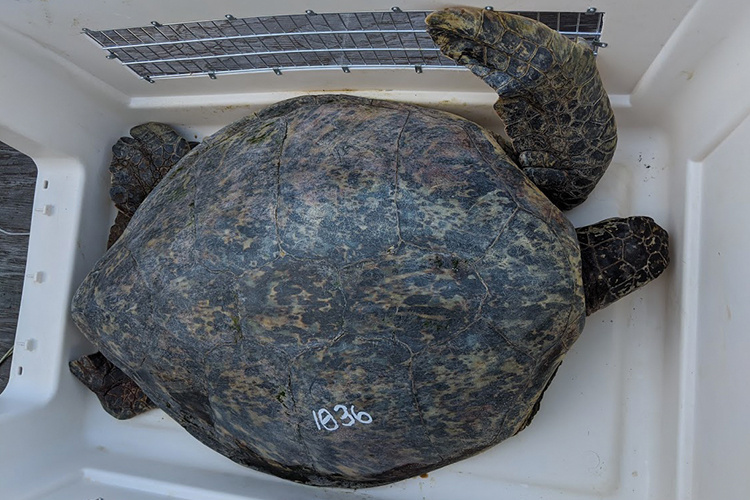 Hawaiian green sea turtle, #1036, being released back to the wild in Waialua, O`ahu, after rehabilitating at NOAA Fisheries’ facility.

“He now has a second chance for a long life,” says Irene Kelly, sea turtle recovery coordinator at the NOAA Fisheries Pacific Islands Regional Office.  Sea turtles can get accidentally snagged on active gear or entangled in gear lost on the reef. NOAA and Hawai`i State Department of Land and Natural Resources reminds the public to help minimize gear left on the reef. And if you accidentally catch a turtle—and it's safe for both you and the turtle—help to prevent deadly entanglement by following these steps:

“We thank the many partners that helped make this a success story, including the community for their initial report, the local non-profit HMAR, and researchers at NOAA Fisheries,” Kelly says  “And thanks to HMAR, we are also sending him off with a Hawaiian blessing in hopes that he will continue to thrive in Waialua for many decades to come.”

For marine animals in distress, call the statewide hotline to report emergencies for sea turtles, monk seals, dolphins, and whales: 1-888-256-9840 and (for non-emergencies) email: RespectWildlife@noaa.gov.

Learn more about fishing around seals and turtles (FAST) program