The Marine Recreational Information Program uses a suite of surveys to collect information from anglers and for-hire operators.

The Marine Recreational Information Program (MRIP) uses a suite of surveys to collect information about recreational fishing catch and effort. Surveys that are directly funded by MRIP include: 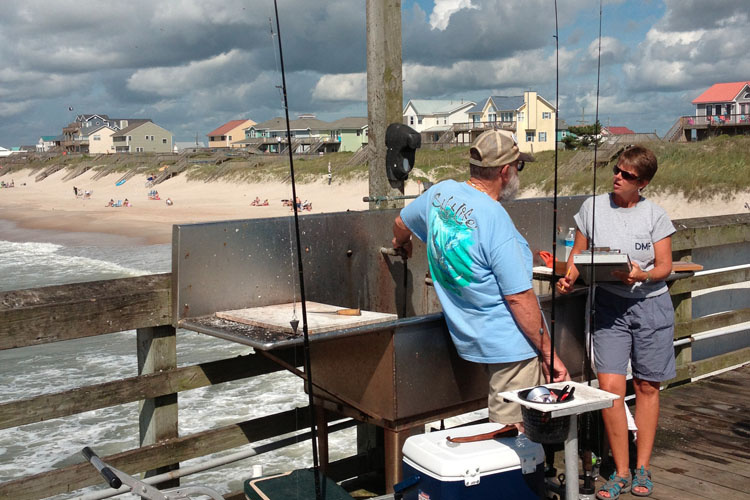 These surveys are administered on the Atlantic and Gulf coasts and in Hawaii. When combined with specialized and supplemental surveys, our national network of data collection programs spans the United States and its territories.

Sampling sites, dates, and times are selected in proportion to the amount of fishing activity expected to occur at a particular site during a particular time of day. Ensuring more active sites are sampled more often increases sampling efficiency—allowing our samplers to spend more time interviewing anglers at high-activity sites and less time idle at low-activity sites—and ensures our overall sample is representative of actual fishing activity. In 2019, samplers from Maine through Georgia received training from the Atlantic Coastal Cooperative Statistics Program (ACCSP) and began using tablets to record and send angler intercept data.

Samples are drawn during two-month sampling periods known as “waves.” Preliminary estimates of average catch per angler trip are produced for each wave; final estimates are generated each year.

The APAIS is administered on the Atlantic and Gulf coasts from Maine to Mississippi and in Hawaii. It has also been administered in Puerto Rico, but our data collection efforts have been suspended in this region as the territory rebuilds following Hurricane Maria.

The Fishing Effort Survey (FES) is a mail survey that collects information from households in Hawaii and on the Atlantic and Gulf coasts. It replaced the Coastal Household Telephone Survey (CHTS) in 2018, after our work to improve the way we understand and estimate fishing effort found a mail effort survey was superior to the random-digit dialing of residential households used by the CHTS.

The FES samples households from a national database of mailing addresses, which is supplemented with information from state-based recreational fishing license and registration programs. Because research indicates that both anglers and non-anglers are more likely to respond to a survey that includes questions about topics other than fishing, the FES is designed as a weather and outdoor activity survey. This helps us improve the number of responses we receive while reducing the risk of nonresponse bias. In 2018, we began testing an online reporting option, piloting a “push to web” design that encourages participants to respond to the FES through a computer or mobile device.

Data are collected at the end of two-month sampling periods known as “waves.” Preliminary estimates of the number of shore and private boat recreational fishing trips taken by anglers who live in the covered coastal states are produced for each wave; final estimates are generated each year.

From January through December (Waves 1 – 6), the FES is administered in North Carolina, Florida, Alabama, Mississippi, and Hawaii. All other states—with the exception of Maine—are sampled from March through December (Waves 2 – 6); Maine is sampled from May through October (Waves 3 – 5). The FES has been administered in Puerto Rico, but our data collection efforts have been suspended in this region as the territory rebuilds following Hurricane Maria.

Data are collected on a weekly basis during two-month sampling periods known as “waves,” and are paired with data collected through charter and headboat APAIS intercepts to estimate total for-hire catch.

The FHS is administered on the Atlantic coast from Maine through Florida and on the Gulf coast in Florida, Alabama, and Mississippi. From Maine to North Carolina, the FHS is supplemented with effort data collected through the Vessel Trip Reporting (VTR) program.