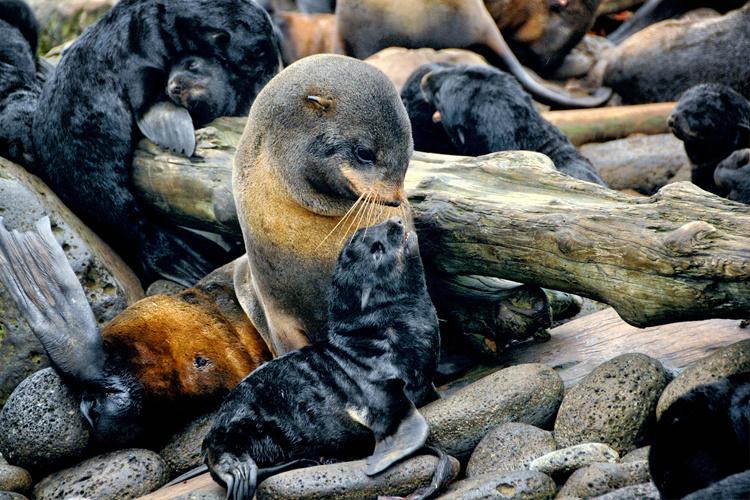 The field team is back in Seattle and the fur seals are off on their first foraging trip. It was a slow start but our last few days on St. Paul were very successful. We attached 16 tracking instruments to adult females and caught and weighed 15 of the females’ pups. This will give us a starting point to measure pup growth over the season, which we hope to relate to the moms foraging success.

Map of fur seals' foraging trips in relation to the grid the Saildrone will use to survey for walleye pollock (orange dashed line). Each colored line represents a different fur seal and her movements between July 13 and July 26.

To help locate the pups when we return in September, each pup was given a unique haircut on its head. These marks will be visible until the pups go through their first molt in early September. The marks will help us ensure we capture the correct mother-pup pairs when it comes time to recover the tracking instruments.

Five of our fur seals have already completed their first foraging trips. In between foraging trips the female fur seals will spend 1 to 2 days on shore nursing their pup and resting. These periods on shore are an important time for the pups to get the milk they need to grow throughout the season. The mother-pup pairs will continue this cycle until the pups are approximately four months old.

In August, the Saildrone will start its survey grid measuring walleye pollock distribution and abundance in the fur seals feeding area. So far, most of our fur seals’ trips, which have lasted just under 5 days, are within the Saildrone survey grid we designed earlier this year. But, that could change. So, I will monitor the fur seals locations over the next few weeks to determine if we’ll need to make adjustments to the survey grid.

Check back soon for more updates about the fur seals locations and I’ll let you know when the Saildrone starts the fur seal portion of its 2017 Bering Sea mission!

Sleepy northern fur seal pups waiting on the rookery until their mom returns to feed them. - Photo: Carey Kuhn

Two instrumented northern fur seals with their pups. Each pup was weighed and received a unique haircut on their head (line on pup on the right and X on pup on the left). These marks will help us match mother-pup pairs when we recapture them in September. - Photo: Carey Kuhn

A View From Inside the Kodiak Lab Aquarium - Post 7

The Kodiak Laboratory's large aquarium restocked with fish and invertebrates after the renovation. Credit: NOAA Fisheries.
View All