NOAA Fisheries and its partners have developed Regional Action Plans to guide implementation of the NOAA Fisheries Climate Science Strategy in each of its regions.

WHAT: The Western Regional Action Plan was developed to increase the production, delivery, and use of climate-related information required to fulfill the NOAA Fisheries mission in the region. The WRAP identifies priority needs and specific actions to implement the NOAA Fisheries Climate Science Strategy in the region over the next three to five years.

WHERE: The California Current Large Marine Ecosystem (CCLME) spans the entire west coast of the continental U.S. and has significant seasonal, inter-annual and inter-decadal fluctuations in climate that impact the marine food-web and fisheries.

WHY:  The CCLME is highly important economically and ecologically. Commercial and recreational fisheries in the CCLME contribute significantly to the U.S. economy and a host of fish, bird, and mammal species depend on the productive waters and lipid-rich food web of the CCLME for their annual feeding migrations. Migrant species include several million metric tons of hake and sardine from the waters off southern California, several hundred million juvenile salmon from U.S. West Coast rivers, millions of seabirds from as far as New Zealand (sooty shearwaters) and Hawaii (Laysan and black-footed albatrosses), and tens of thousands of grey whales from Baja California, and humpback whales from the Eastern North Pacific. These feeding migrations allow species to load up on energy reserves as an aid to survival during their winter months in southern extremes of their distribution. Climate-related physical processes that disrupt the CCLME ecosystem may result in negative impacts to U.S. fisheries, migrant species, and the people and communities that depend on these living marine resources. Decision-makers need actionable information on how changing climate and oceans will impact this region’s marine resources, and what can be done to reduce impacts and increase resilience. 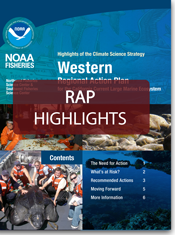 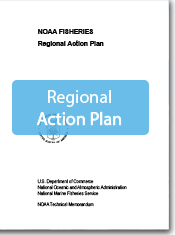 Last updated by Office of Science and Technology on October 24, 2019