From the Sierra Nevada to the Golden Gate, California is a salmon state. Discover the species, habitats, and human connections through art. 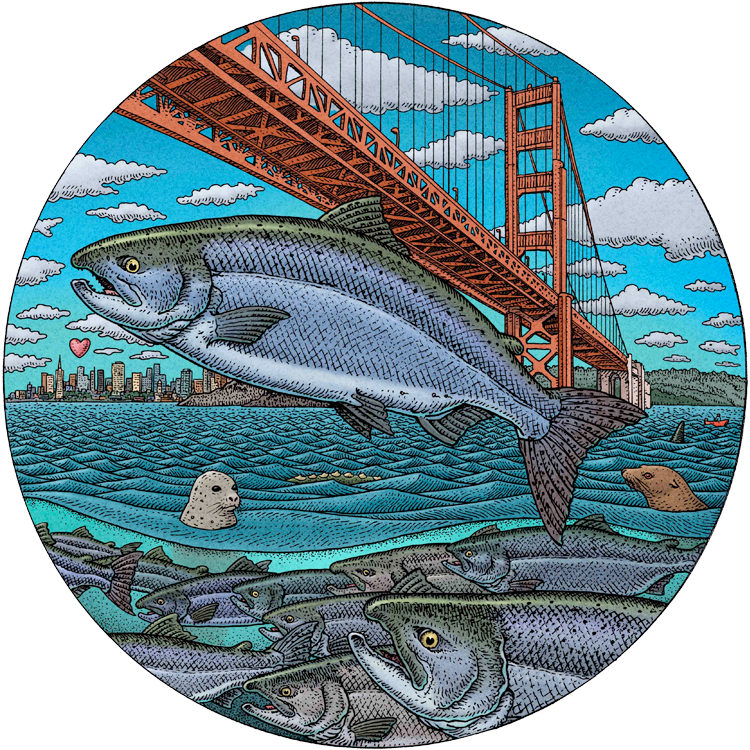 NOAA Fisheries’ California Salmonscape follows Pacific salmon through California’s dynamic habitats, which extend from the ridgetops through valleys, to the coastal wetlands and ocean. We weave science into art, and art into science, to illustrate the continuous flow of seasonal salmon runs and the connections between humans and nature throughout the salmon life cycle.

The California salmonscape ranges from the Smith River in the north to the Tijuana River in the south. Depending on where you are, you can encounter Chinook salmon, coho salmon, steelhead and rainbow trout, and coastal cutthroat trout. Most migrate from their home streams to the ocean and back again, maturing from egg to adult, sharing the landscape with human activities across the most populous state in the nation.

Researchers at the Southwest Fisheries Science Center help us understand the vital ecosystems defined and enriched by Pacific coast salmon. These efforts strengthen and inform management, conservation, and recovery actions for California salmon and steelhead and are used by the West Coast Region as well as tribal, state, federal partners, other stakeholders and nongovernmental groups.

Learn more about California’s salmon and the diverse ways in which humans interact with salmon by exploring the materials below. 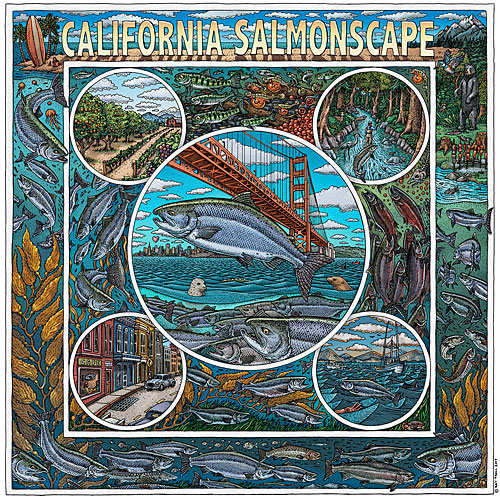 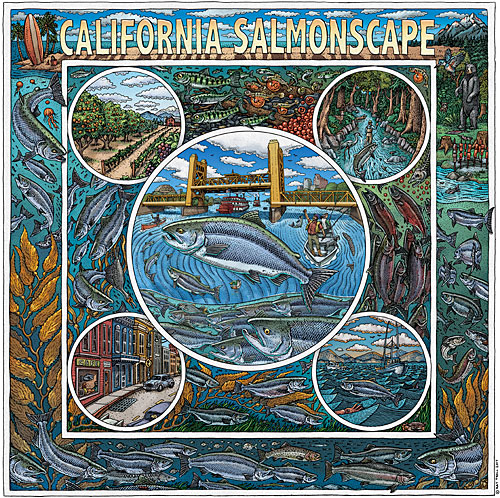 The California Salmonscape poster depicts Chinook salmon as they pass under the Golden Gate Bridge (left) and Sacramento River Tower Bridge (right) first as juveniles, and again as adults when they return to the watershed to spawn. The poster illustrates many aspects of the salmon life cycle, salmon habitat, and interactions with humans. Search for imagery of the different stages of the salmon life cycle, from egg to adult (central background). Find illustrations of the different species of salmon and other anadromous fishes, such as sturgeon, that share California’s waterways as well as images of salmon prey and predators (outer border). The four outer circles depict crucial habitats for salmon and human activities that occur in mountain streams (top right), rivers (top left), estuaries (bottom left), and open ocean (bottom right). Learn more about California salmon and your place in the salmonscape by downloading and sharing the art with friends and family.

This deck of salmonscape playing cards contains one suit dedicated to each of California’s four species of salmon and trout: Chinook salmon, coho salmon, steelhead and rainbow trout, and coastal cutthroat trout. Each card reveals a fact about salmon life stages — from egg to adult — and the connections between humans and nature throughout the salmon life cycle. Play your favorite card games while following salmon and trout through California’s varied freshwater, estuarine, and marine systems. For more information, visit the Salmonid Restoration Federation.

The California Salmonscape exhibit is an interactive display with an overview of salmon diversity, life history, threats, and information on what you can do in your everyday life to protect salmon populations. Currently on display at Monterey Bay National Marine Sanctuary’s Exploration Center in Santa Cruz, California, the exhibit is designed to travel and can move to other educational facilities for public display. For more information contact: Lisa.Uttal@noaa.gov.

For more information about the California Salmonscape project, contact: Sarah.Mesnick@noaa.gov

For more information on California salmon: