The Cetacean Assessment and Ecology Program has a continuing project to study predation on marine mammals in the Aleutian Islands. 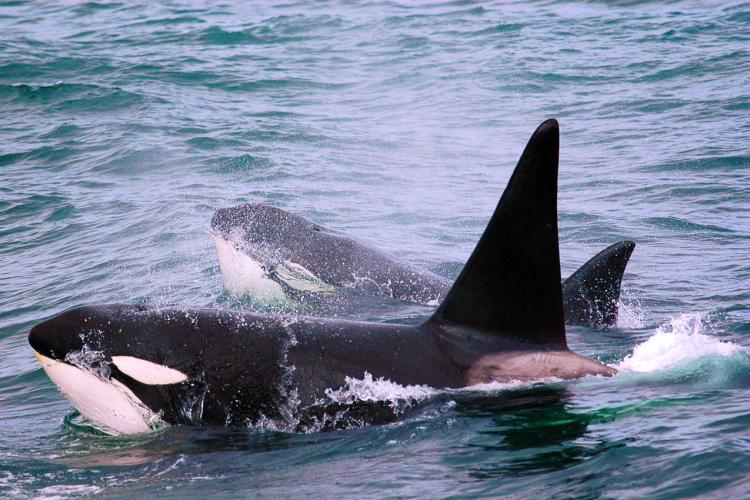 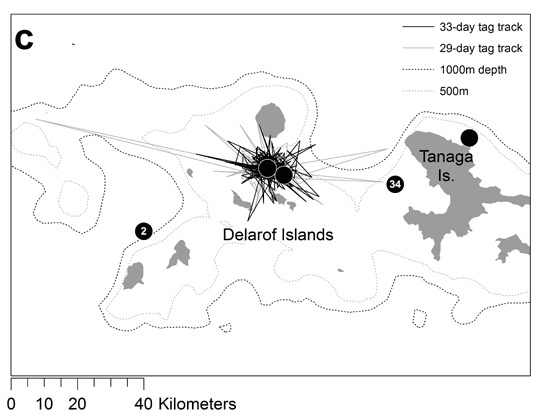 Figure 1. Encounters with transient killer whales in the Delarof Islands area in the central Aleutian Islands (black circles).  Numbers within the circles refer to biopsy samples for which nitrogen stable isotope ratios have been calculated, with δ15N values of 17.4, 13.2, and 12.7, respectively, for samples 2, 3, and 4, showing that both low and high values occur in the Delarof Islands. Note that samples 3 and 4 were collected in the same location. The black line and gray line represent the tracks of two transient killer whales tagged during the same encounter, with tracks of 33 and 29 days, respectively.

The focus of current research has shifted to the western and central Aleutian Islands because of the continuing decline or lack of recovery of Steller sea lions in that area. No observations have been made of predation on Steller sea lions in the western and central Aleutians, but observation effort there has been relatively sparse.  The only predation events observed during NMML/NMFS surveys in the central and western Aleutians were of a Dall’s porpoise and a Baird’s beaked whale. Additionally, Estes et al. described predation on sea otters in the central Aleutians.

Location-only satellite tags (N=4) have also elucidated two dramatically different foraging strategies, with some killer whales moving ~1,000 nautical miles south of the Aleutians (far outside the range of Steller sea lions) and other killer whales remaining in a single location over deep water at the head of a submarine canyon for an entire month (Fig. 1), a foraging behavior not previously observed in transient killer whales. While it is possible these killer whales were foraging at the surface on marine mammals the entire time, it seems unlikely. Although we have often seen sperm whales and beaked whales in habitat over submarine canyons in the Aleutian Islands, their stable isotope values from the central Aleutians are 15.2 (sperm whales) and 16.3 δ15N (Baird’s beaked whales), respectively; such values are again too high for them to be substantial prey of killer whales, which are characterized by a range of 12.5-14 δ15N. A month spent foraging over a submarine canyon, combined with the predation observation and stable isotope data summarized above, suggests the hypothesis that these killer whales were foraging on squid.

Further research is continuing by piggy-backing on NMML’s Steller sea lion research cruises. A proposal to the Pollock Conservation Research Cooperative, with co-investigators Russ Andrews (University of Alaska Fairbanks) and John Durban (Southwest Fisheries Science Center), has provided funds to deploy Mk10-A satellite-linked depth tags on transient killer whales in the western and central Aleutians to track their movements and, importantly, record their diving behavior. Diving information will allow us to estimate what proportion of the time transients in the region are pursuing a deep-diving foraging strategy; this potentially represents time spent foraging on squid and not on Steller sea lions.

Additional support from the North Pacific Fisheries Foundation has allowed us to expand our acoustic recorder work into the central and western Aleutians.  Three recorders were deployed in late October 2012 adjacent to Steller sea lion rookeries in the Delarof Islands, Kiska Island, and Agattu Island. The recorders were on a 15% duty cycle (45 seconds recorded every 5 minutes) in order to record the presence of killer whales (from both acoustic calls and echolocation clicks). The recorder data will be used to determine whether transient killer whales regularly occur around Steller sea lion rookeries in the western and central Aleutians, and whether their rate of occurrence is similar to rates seen in the eastern Aleutians.