* The information in this document has not been subjected to formal peer review. Please use footnotes and the following format when citing this document: 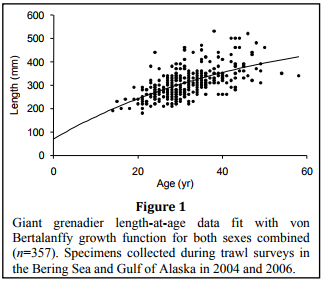 Grenadiers, or rattails, (family Macrouridae) are a diverse and abundant group of deep-sea fish found worldwide (Phleger, 1971). Giant grenadiers, Albatrossia pectoralis, are found in waters of the continental slope from Baja California, Mexico through the North Pacific Ocean (including the Gulf of Alaska, Bering Sea, and Sea of Okhotsk) to Japan (Mecklenberg et al., 2002).

In Alaskan waters, giant grenadiers are especially abundant at depths greater than 400 m (Clausen and Rodgveller, 2010). Usually, male giant grenadiers are found deeper than 800 m, past the maximum depth of most trawl surveys, which may explain why males are not captured as often as females in standard Alaska Fisheries Science Center (AFSC) trawl surveys (Clausen, 2005). While this species is not currently being targeted in Alaska, giant grenadiers are a large part of the bycatch in fisheries for sablefish (Anoplopoma fimbria) and Greenland turbot (Reinhardtius hippoglossoides) (Clausen and Rodgveller, 2010). 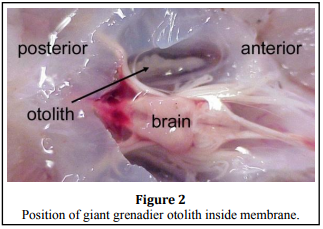 Little is known about the early life histories of grenadiers. The larvae of some species are believed to hatch at a depth of around 200 m and live pelagically as juveniles before becoming bottom dwellers by adulthood (Phleger, 1971).

The annual spawning period appears to be protracted, and females do not mature until relatively late in life, at an age of approximately 23 years (Rodgveller et al., 2010). Length-at-age data from the AFSC Age and Growth Program indicate that this species grows slowly to relatively old ages (Fig. 1). Von Bertalanffy growth parameters for giant grenadier collected during trawl surveys in the Bering Sea and Gulf of Alaska in 2004 and 2006 were L∞=566.08 mm AFL, k=0.02/yr and t0=-6.27 yr (n=357; Fig. 1). 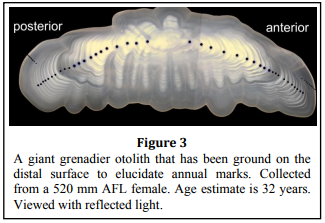 Giant grenadier otoliths have been collected by the AFSC since 1997, and in a recent effort to begin giant grenadier stock assessment, the Age and Growth Program was asked to study the feasibility of providing production age estimates. Consequently, we undertook a study to develop aging methodology and criteria for this species. In the initial stages of development, the break-and-burn method was applied to selected otoliths but did not result in adequate growth pattern clarity. A second method, thin-sectioning, resulted in relatively clear patterns. (Please see Goetz et al., 2012, for a more detailed description of standard AFSC otolith preparation methods.) However, the distal surface grinding method, described in detail below, produced the best patterns for age determination. Upon our first examination of giant grenadier otoliths, the elongated shape (Fig. 2) and wide banding pattern visible on the distal surface suggested that growth zones might be clearest there, prompting us to test grinding down the outermost distal layer as a new method. This method not only yielded superior pattern clarity, but also required less preparation time than the thin-sectioning method. The results of this study were published in conjunction with maturity, spawning, and fecundity data (Rodgveller et al., 2010). 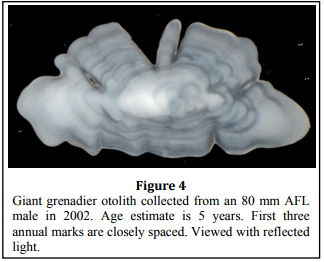 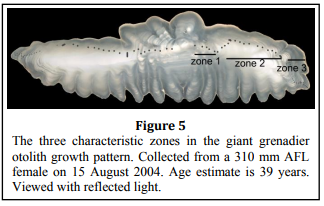 To age the ground distal surface, otoliths are viewed in a water-filled Petri dish with a black background using a dissecting microscope and reflected light under 8× magnification (Figs. 3 and 4).

There are three distinct zones in giant grenadier otoliths, each with a different growth pattern (Fig. 5). In Zone 1, the first several annual marks have a tight banding pattern. In Zone 2, spacing between annual marks is relatively wide until between age 10 and age 20. Zone 3 is observed after about age 20, where the annual marks become narrow and more evenly spaced. In general, male and female growth rates are similar until they reach pre-anal fin lengths (AFL) of about 300 mm, after which males may exhibit significantly narrower growth patterns.

In her master’s thesis, Burton (1999) validated giant grenadier age estimates by radiometric analysis using 210Pb:226Ra isotopes. The length range of individuals included in this study was small. In general, thin-section age estimates agreed closely with radiometric age estimates, with a bias toward estimating older ages than the radiometric method. This bias could partly be explained by the amount of core material used in the radiometric analysis. However, it could also be a result of Burton’s aging criteria. Our aging criteria placed our third annual mark where she would have placed her fifth annual mark. In a personal communication with Burton1, she agreed with our placement of the third annual mark after viewing some very young otoliths patterns that had not been available to her during her thesis research.

A validation study of our age estimates using bomb radiocarbon dating is currently underway. Specimens from otoliths that have clear growth patterns and birth years estimated between 1956 and 1974 have been sent to the Woods Hole Oceanographic Institution for analysis.