Counting gray seal pups in their nurseries is one way researchers are keeping tabs on this population as it reoccupies historic habitats off New England. 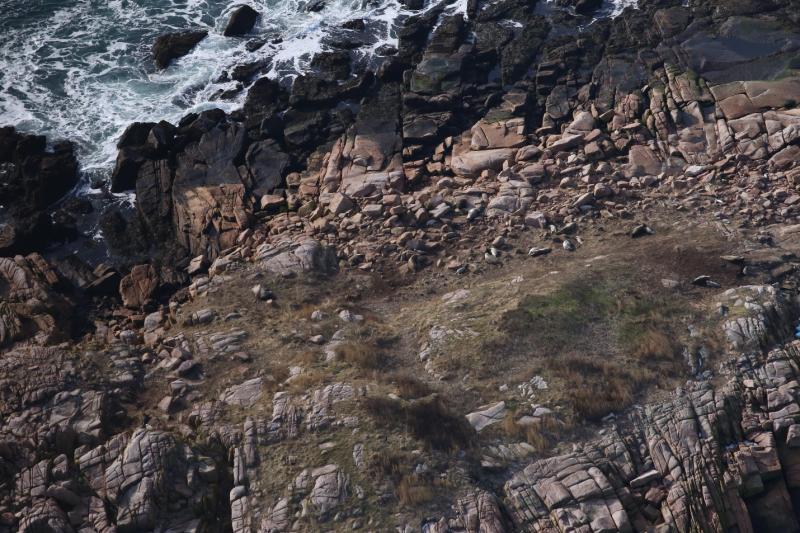 Seals resting among the rocks on Green Island, Maine.

For three days in January, Northeast Fisheries Science Center researchers Elizabeth Josephson and Peter Duley flew along the Northeast coast. They were looking for gray seals and their pupping colonies.

“We surveyed a good part of the coastline from the Canadian border to small islands off Long Island, New York,” said Josephson, who recorded the data. “We wanted to observe and take images of as many seals and their pupping colonies as possible, and we lucked out in terms of timing and weather.”

Duley took photographs from a window in the NOAA Twin Otter airplane. The plane is based at U.S. Coast Guard Air Station Cape Cod when conducting the center’s aerial marine mammal survey operations. Its home base is the NOAA Aviation and Marine Operations center in Lakeland, Florida.

Scientists estimate gray seal abundance by counting numbers of pups born each year. Gray seal pups are born on land during the winter and remain ashore until they are weaned and molt their white baby fur. This makes winter the easiest time to observe them.

In past years, seal researchers from the center have also conducted operations on land. This has included tagging seals and conducting health assessments on as many animals as possible on Muskeget and Monomoy Islands off Cape Cod.

Due to the pandemic, land operations were cancelled, but the aerial flights have resumed under enhanced safety protocols. NOAA Fisheries has been conducting regular aerial surveys since 2005 to keep an eye on the recolonization of habitats by gray seals.

These animals were almost wiped out in U.S. waters by the mid-20th century. Now, they are moving back into portions of their historical range. They are pupping in increasing numbers on islands off the coast of Maine and Cape Cod.

Blessed with a great stretch of winter weather January 11-13, Josephson and Duley joined NOAA Corps pilots Lt. Josh Rannenberg and Lt. Conor Maginn in the  aircraft. It was the peak of the gray seal pupping season, which runs from early December through early February.

The aerial team spent one day flying along the coast of Maine, the second along the Massachusetts coast and southern New England to Long Island. The third day was spent revisiting some of the major pupping sites off Cape Cod and the island of Nantucket, Massachusetts. Muskeget Island off Nantucket is the largest gray seal pupping colony in the United States. Monomoy Island off Chatham, on the southeastern corner of Cape Cod, is also a pupping colony.

The Department of Fisheries, Canada conducted concurrent aerial surveys of gray seal pupping colonies in Canada. Scientists will count the seals in the imagery collected and use the counts to estimate total range-wide population numbers.