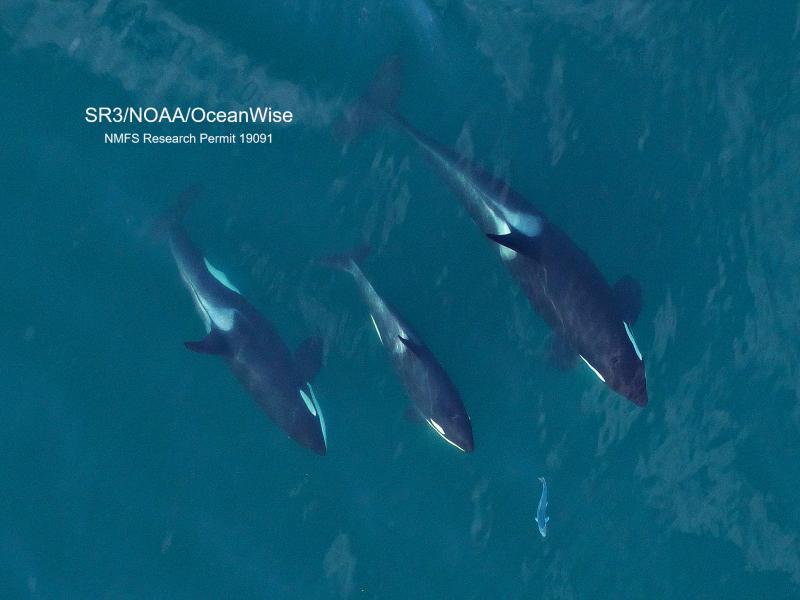 The body condition of endangered Southern Resident killer whales reflects changes in Chinook salmon numbers in the Fraser River and the Salish Sea. This is according to new research using aerial photogrammetry from drones to track changes in their body condition over time.

The new findings published today in Ecosphere highlight the value of monitoring these endangered whales through aerial photogrammetry. This method can detect individual whales declining in condition, which can provide an early warning system that they may die.

The 74 Southern Resident orcas make up three pods known as J, K, and L. Each pod is made up of distinct social and family groups.

The research showed that the body condition of J pod whales improved when Chinook salmon abundance was higher in the Salish Sea and in Fraser River tributaries. L pod body condition improved when Chinook salmon abundance was higher in Puget Sound tributaries, although that relationship was weaker than J pod and Fraser River Chinook. K pod whales had no clear relationship to the salmon populations examined in the study. However,  whales in K pod also experienced little change in their body condition during the study period.

K and L pods spend more time foraging on the outer coast of Washington and Oregon than J pod. Their more varied diet is more challenging to relate to changes in their body condition. In contrast, J pod depends to a greater extent on Chinook salmon. Differences in body condition between the three pods reflects distinct foraging patterns, while the condition of individual whales provides insights into their health, researchers found.

This study also revealed that whales in poor body condition were two to three times more likely to die in the next year than healthier whales.

“It makes sense that the different pods would have different trends in body condition; they have different distributions, and that is probably because they are targeting different prey sources,” said Joshua Stewart, a postdoctoral researcher at NOAA Fisheries’ Southwest Fisheries Science Center. “What is consistent across the three pods is that skinny whales seem to be at higher risk of death. If you can determine that their health is deteriorating, there may be an opportunity to take action before those whales deteriorate past the point of recovery.”

The new research findings may also help fisheries managers find ways to increase the availability and accessibility of Chinook salmon. The goal is to increase availability in places and at times of the year when the whales most need them, while still providing fishing opportunities. “Body condition information helps us track the health of individual whales in ways that provide a level of detail we did not have before,” said Lynne Barre, NOAA Fisheries Recovery Coordinator for the Southern Residents.

The findings are based on seven different years of field work and analysis by researchers from:

NOAA Fisheries has identified the Southern Residents as one of nine national “Species in the Spotlight,” that warrant extra focus because of their high risk of extinction. An updated Action Plan for the species released in April calls for building greater knowledge of the whales’ health to advance recovery and support emergency responses for ailing animals.

NOAA Fisheries is also reviewing the status of the killer whales, as required every 5 years under the Endangered Species Act.

Next Steps for Whales

“This paper represents an important validation that encourages us to continue our photogrammetry study,” said Dr. John Durban, formerly with NOAA Fisheries and now a Senior Scientist with Southall Environmental Associates. He piloted the drone that collected data for this paper. “In particular, we have shown this to be a powerful method for providing an early warning about the declining health of individual whales.”

Indeed, further data collection is already underway, according to Dr. Holly Fearnbach of SR3, who led the photogrammetric image analysis for this paper. “We are now collecting photogrammetry data throughout the year to provide greater resolution on seasonal patterns of nutritional status and also to identify whales of concern to inform potential management actions before they die,” said Fearnbach.