In 30 years and nearly 40,000 days at sea, the Southeast Fisheries Science Center’s Pelagic Observer Program has worked with crews on 275 fishing vessels to better manage fisheries in the Northwestern Atlantic. 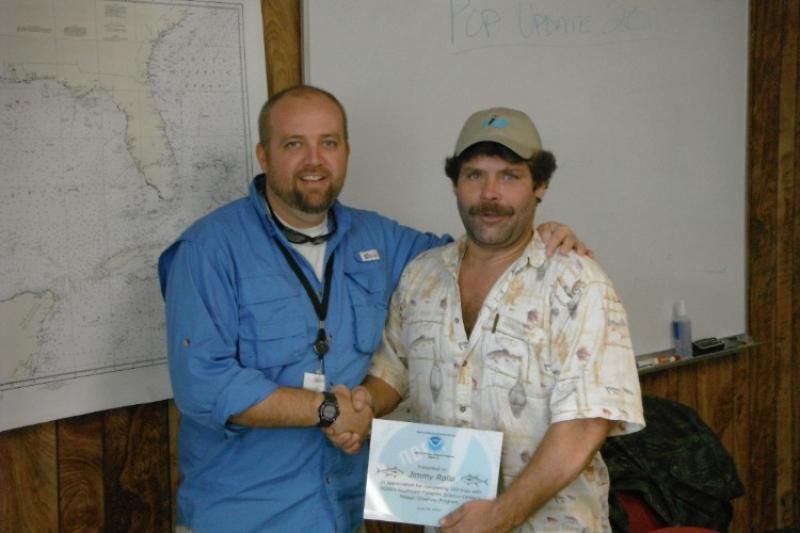 There have been a lot of changes in fisheries management in the last 30 years. Many of those changes have been seen by our fisheries observers, who work closely with the commercial fishing industry. Since its establishment in June 1992, our Pelagic Observer Program has employed more than 200 observers. They have worked hard to coordinate with fishermen to gather data for the sustainable management of pelagic fish stocks. These observers have accomplished a tremendous amount.

Observers in the program have successfully completed more than 39,240 sea days, while on board approximately 275 fishing vessels. The science center trains observers to record detailed information from each vessel including:

The Pelagic Observer Program grew from a need for more catch data to address the declining North Atlantic swordfish population in the early 1980s. Data collected by the observers helped to inform the Swordfish Management Plan. It set protective requirements, guided scientific research, and reduced the harvest of small swordfish, ultimately leading to the recovery of the North Atlantic swordfish.

The observers primarily work with fishermen who mainly target tuna and swordfish. The U.S. Atlantic pelagic longline fleet encompasses five distinct fisheries that have a variety of fishing strategies and practices. The fleet includes:

Having trained personnel participating in commercial pelagic longline fishing activities is critical to getting accurate data. The data collected by observers contributes to making informed decisions on how to best manage these fisheries. Over the years, the data that observers collect has grown from solely biological characteristics (length, sex, measurements, identification, etc.) of the populations targeted. Now it also includes important information on the incidental take of protected species and other bycatch.

The work the observers have done over the years has contributed to improvements in efficiency and increased knowledge. They have tested fishing gear designs to reduce bycatch including the use of circle hooks and weak hooks, both of which are now commonplace in the industry. The observer data has helped to determine that roundscale spearfish are found within the Atlantic pelagic longline fishery. The science center’s program also made use of satellite text communications, which is now used by fisheries observers nationwide.

Additionally, the Pelagic Observer Program is required by the International Commission for The Conservation of Atlantic Tunas and the Sea Turtle Biological Opinion. Under these agreements, this program continues to seek out different ways to reduce bycatch and bycatch mortality. Gear modifications, seasonal fishing areas, and fish characteristics will continue to provide information that helps to maintain sustainable fisheries stocks and preserve marine environments.