Visualizing distributions of 22 fish species by size over 34 years of climate variability in the Bering Sea. 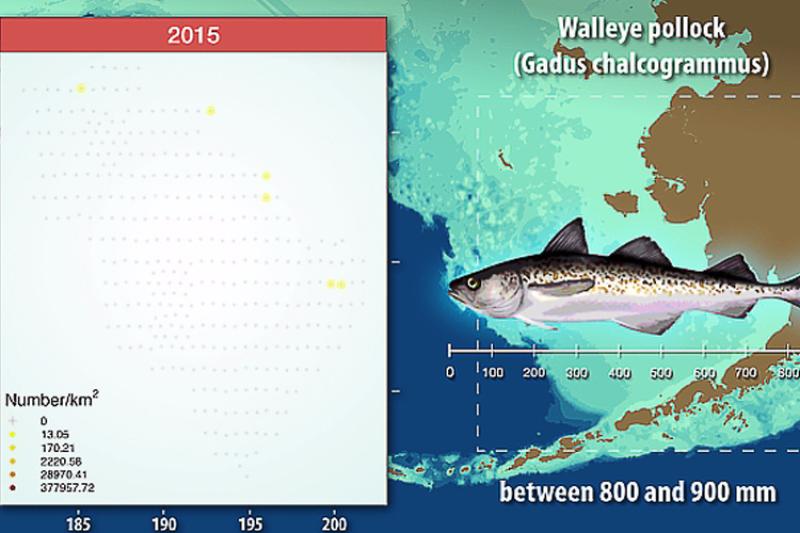 The eastern Bering Sea supports some of the most valuable fisheries in the world. To keep Bering Sea fisheries sustainable, we need to understand how fish respond to changing conditions in the marine environment.

A 2017 Alaska Fisheries Science Center study examines how fish populations changed over 34 past years of varying climate conditions and may provide clues to how future changes will affect fisheries. And what happens in the Bering Sea has broader implications.

“This is a place where we can watch changes in the marine environment,” says fisheries biologist Steve Barbeaux of NOAA’s Alaska Fisheries Science Center, lead author of the study. “Climate variability has increased in the Bering Sea in recent years, and we can use that to study how ecosystems respond to change.”

Summer bottom trawl surveys provide the information fisheries managers need to set quotas for sustainable fishing: where fish are, how many, what species, sex, size, and age; and environmental data such as ocean temperature.

Now, this vast data resource can be seen in a way it never has before. Barbeaux analyzed survey data from 1986 to 2015 to explore patterns of fish distribution by species, size, and sex in relation to environmental conditions. He mapped the data to create visualizations that show fish life histories unfolding over space and time.

“This would not have been possible without a consistent, long-term survey,” Barbeaux says. “Having a 34-year time series is invaluable. It let us investigate in detail the sensitivity of species to environmental change and the degree to which species are already adapted to natural variation in the environment.”

Sufficient data were available for in-depth analyses of 22 groundfish species, from arrowtooth flounder to yellowfin sole.

“To me the most exciting thing about this research is being able to see all the species together in one place, being able to compare and contrast them”, says Barbeaux. “One thing that hasn’t been looked at for these species is similarities and differences in life histories.”

The Matter of Size

These ontogenetic differences -- changes with age -- mean big and small fish of the same species could respond very differently to changes in the ocean environment. So in the study, Barbeaux recognized that size matters.

One reason young fish may respond differently to environmental change than adults of the same species is that they may live in different places. The study identified two common ontogenetic migration patterns:

Other species showed unique patterns. Walleye pollock migrated from shallow to deep then back to shallow areas over the course of life. Alaska skate do the opposite, starting in deeper nursery areas and moving to shallower areas as they grow and mature, then back to deeper waters as adults.

Mapping species distributions by size revealed not only ontogenetic migration patterns but also environmental preferences and effects of changing conditions over time.

Barbeaux highlights a few findings in the study:

Barbeaux emphasizes that these findings represent only some of the potential knowledge to be gained from these data. The study presents a wealth of data in an accessible form that other scientists can use in their research. ”This will be a publicly available resource. These data represent a lot of work over many years by a lot of people, and anyone can use them.”