Climate change is transforming estuaries along the Gulf Coast. Learn how these changes may impact shrimp populations with two NOAA Fisheries shrimp experts. 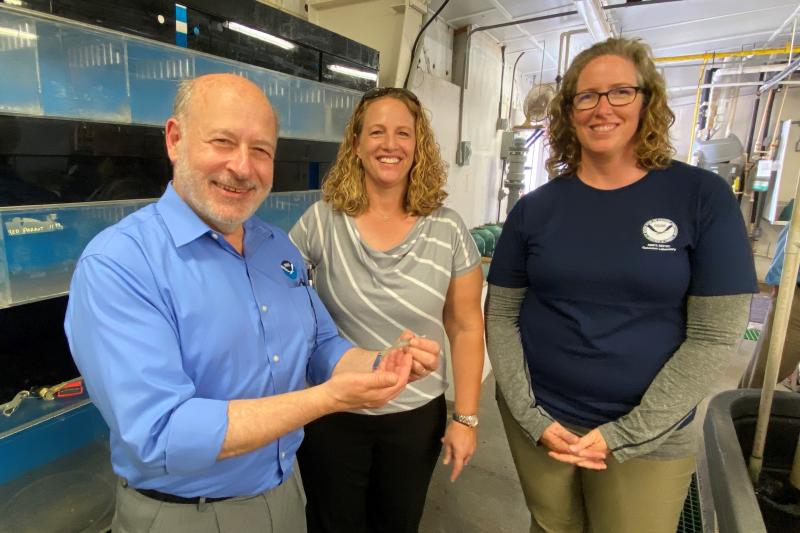 Jennifer Leo and Jennifer Doerr both “stumbled into” researching shrimp at NOAA’s Southeast Fisheries Science Center’s Galveston facility after graduating from Texas A&M University. Their research focuses on penaeid shrimp, commonly referred to as pink, white, and brown shrimp in the Gulf of Mexico. These shrimp make up one of the most economically valuable fisheries in the United States. It brought in $371 million in commercial fisheries landings revenue—45 percent of the revenue in the Gulf of Mexico—in 2019.

When they are young, these shrimp reside in estuarine habitats, like salt marsh, oyster reefs, and seagrass beds. They grow there before joining the adult shrimp population out at sea. However, the types of emergent vegetation in some estuarine habitats are starting to shift from salt marsh to black mangrove in many areas of the Gulf coast due to climate change. The impacts of these changes to shrimp are yet to be understood. Jennifer Doerr and Jennifer Leo are working to uncover how this may affect the shrimp fishery in the years to come.

Doerr: Using satellite imagery, we’ve been able to see a shift from salt marsh to mangrove habitats. One reason this is happening is because the Gulf Coast has been experiencing less frequent deep freezes than we typically get in the winter. Black mangroves are fairly resistant to a slight freeze, but periodic deep freeze events limited their survival. But since the 1990s, black mangrove habitats have really started to expand because climate change has made for milder winters. Climate-linked increases in water temperature and intensity of droughts have also led to a die-back of more temperate salt marsh plants.

Leo: Once they’re established, black mangroves are able to take over salt marsh grass shorelines by growing taller and shading marsh grasses from the sun. Mangroves tolerate longer periods of tidal flooding than salt marsh. As sea levels continue to rise due to global warming, salt marshes will suffer while mangroves will be able to persist. It’s really a number of different climate change impacts that has allowed black mangroves to expand more rapidly in the last 15 years or so.

Why is the transition from salt marsh to mangrove habitat important?

Doerr: It’s all about how shrimp use each habitat. When they're young, shrimp use estuarine habitats like salt marsh, seagrass beds, and oyster reefs as nursery areas. These habitats provide juvenile shrimp with food and protection from predators before they return to the fishery in the ocean. If this change in habitat type is going to have a big impact on the survival and growth of all these young shrimp, then it could impact the offshore shrimp fishery in the Gulf.

Leo: Because young shrimp are so reliant on salt marsh vegetation, we need to determine if black mangrove habitat provides the same level of resources like food and shelter as marsh grass. Do they serve as essential habitat for shrimp? Or could they be detrimental to this stage of the shrimp’s cycle? We're looking at how shrimp use these two habitats, how each habitat affects their growth, survival, productivity—and ultimately—the offshore shrimp fishery as this climate-driven shift continues.

How are you researching this issue?

Doerr: We start by collecting penaeid shrimp samples from small areas of salt marsh and black mangrove habitats. We bring them back to the lab where we identify and measure them. At the same time, we also enclose sections of each habitat—salt marsh and mangrove—with cages and place tagged shrimp in each one. After a certain amount of time, we collect the shrimp and measure them again to see how much they grew. Using these experiments’ data, we can determine which habitat, if any, supports a higher growth rate for shrimp.

Leo: We're also using genetic analysis—taking some shrimp from the estuary back to our lab and measuring their RNA to DNA ratios to get an idea of the relative growth rates between habitat types. This way, we can avoid having to set up several week-long experiments in the estuary.

If we continue to see mangroves dominate salt marsh habitat, what will the future of penaeid shrimp in the Gulf of Mexico look like?

Hypothetically, let’s say we find that growth and survival of shrimp in mangroves are not as high as what we usually see in salt marsh habitats. If this habitat transition continues to happen, then we could start to see declines in the number of shrimp caught in the Gulf of Mexico. That would have a big impact, particularly on that industry. Shrimp are also prey for a number of different fish in the Gulf like red snapper, grouper, and red drum, both in estuaries and in the ocean. If shrimp populations decline, other fishery species would lose an important food source and could decline as well.

How can NOAA Fisheries help to mitigate the risks of this habitat loss?

Leo: Protecting the marsh habitats we still have is important. As sea levels rise, marsh grasses become unable to handle the increased inundation. They recede further from the shore until they’re gone, while mangroves can continue to expand. Restoration efforts to add elevation to marsh habitats can be effective for retaining the marsh grass habitat that we have.

We’re currently developing a model that uses ocean circulation forecasts to simulate the fate of larval shrimp as they are carried from the ocean to the marsh via wind and currents. We hope this model can help us identify where juvenile shrimp settlement densities are highest. This kind of information would assist our partners in identifying the most effective locations for habitat restoration.

Doerr: Black mangroves are effective at stabilizing shorelines and offer storm protection for habitats affected by climate change at the water’s edge. But it may be beneficial for future projects to consider a mixture of mangroves and salt marsh if our research suggests that marsh vegetation supports higher productivity for penaeid shrimp. This type of information would be valuable to our restoration teams and partners when selecting areas for restoration and designing their projects.

Overall, this information will help all of us understand potential impacts to the fishery and better prepare for a changing marine ecosystem.

Last updated by Office of Communications on April 20, 2022