North Atlantic right whales are in crisis and will go extinct if the current population decline is not reversed. Learn how NOAA Fisheries and partners are coordinating closely to solve this urgent conservation challenge in this Q&A. 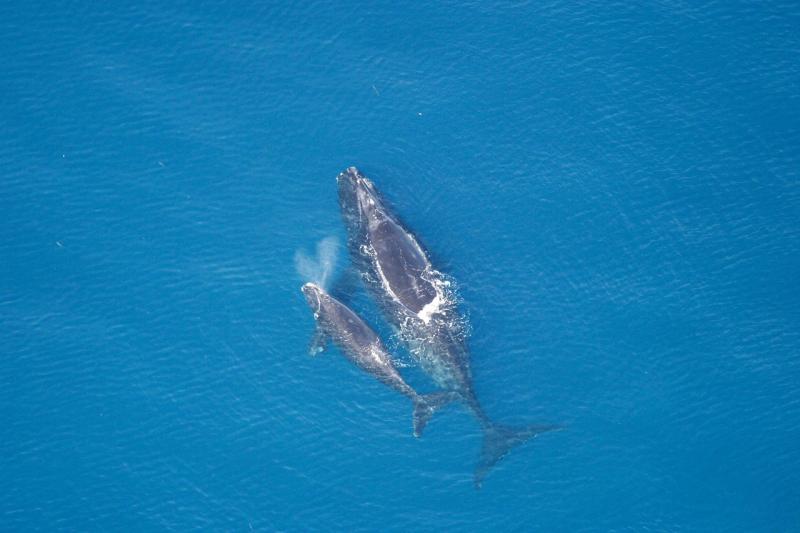 Editor's Note December 10, 2021: When this interview was conducted in 2018, there were an estimated 450 North Atlantic right whales remaining. The latest preliminary estimate suggests there are now fewer than 350 left.

The number of North Atlantic right whales born has plummeted in recent years. From 2006 to 2016, these whales were known to have produced just under 20 calves per year, on average. This year, several right whales were spotted in their calving area off Georgia and Florida—but there were no signs of calves. NOAA scientists know that females are giving birth less frequently. And the number of reproductive females in the population is low. Of the approximately 450 North Atlantic right whale individuals remaining, fewer than 100 are reproductive females. 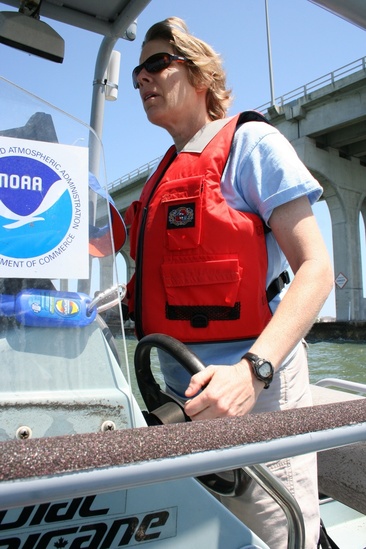 What work do you do with North Atlantic right whales?

Most of my work on behalf of NOAA is focused on efforts to monitor and assess the whales during the calving season. We organize and conduct aerial and vessel surveys with our state and nonprofit partners off the coast of Georgia and Florida, which is the key area where females give birth. Survey teams look for right whales, including mother/calf pairs. When we see whales, we photograph the animals so they can be individually identified. This work is conducted in tandem with acoustic research in the northeast to monitor right whale distribution, and contributes greatly to our understanding of the status of the population.

In addition to the surveys, we also provide funding to partners to take biopsy samples from juveniles and calves. We biopsy calves because when they are small, they aren’t identifiable as individuals. Biopsies give us genetic material that can then be matched to their mother. As long as the mother is photographed with the calf, we can determine when the calf was born—and that information allows us to know precisely how long individual right whales are living.

We also respond to right whale crises, such as entangled or stranded animals. If an entangled right whale is sighted, we pull together a team of highly trained experts and launch a disentanglement response. If a live right whale is found stranded on a beach, the Marine Mammal Stranding Network mobilizes to provide humane care to the whale. If a right whale is found dead, we conduct a necropsy to determine potential cause(s) of death and collect valuable biological data to help conservation of the species.

What have you learned through your research about the current challenges female North Atlantic right whales are facing when reproducing?

Individual females are having fewer calves. Normally, a female right whale needs 1 year for pregnancy, 1 year to rear offspring, and 1 year to rebuild energy reserves before starting all over again. But it appears the calving interval has lengthened considerably. Last year we only detected four mother/calf pairs down here. These females were averaging 7 or 8 years between calving intervals instead of 3 or 4 years.

We know that the two leading causes of injury or mortality for North Atlantic right whales are entanglement in fishing gear and collisions with ships. Even if a female whale doesn’t die from an entanglement, the energetic demands from dragging around heavy gear—fishing gear that can weigh more than 100 pounds—are on par with those associated with pregnancy or migration. This energetic drain is stressful enough to delay pregnancy. With regard to vessel collisions, the ship speed rules NOAA implemented have significantly helped reduce that serious threat to the population.

What do we still have to learn about how our actions are affecting North Atlantic right whales’ reproductive rates?

Whales are being found in areas where we haven’t found them before. We’re seeing them in the mid-Atlantic year-round, which is a change in recent years. Fewer whales are going to the Bay of Fundy, which used to be a heavily used feeding and courtship area. This year only 12 whales showed up in the calving area off the southeast U.S. coast, where we’ve previously had as many as 200 in one year. Something has caused their distribution patterns to shift. These changes are likely the result of changes in where their prey—zooplankton—are found, whether seasonally or geographically.

Many things are culminating to create a challenging time for right whales. It’s imperative that we find solutions–solutions that may be difficult to implement and where we will need to be creative—in order to give North Atlantic right whales a chance.

What is one tool or resource you’ve found to be particularly helpful in your work?

Our partners are invaluable to us. It’s a very complex challenge to help recover right whales—they are far-ranging animals and can be unpredictable, so it takes a lot of coordination with colleagues domestically and internationally. That’s why we work so closely with partners at state and federal governments, the Government of Canada, and academics to leverage our collective resources. For example, at the federal level along with NOAA, the Navy, Coast Guard, and Army Corps of Engineers contribute funds to support aerial surveys and a notification system that distributes information on right whale sightings. All of these coordinated efforts reduce the risk of collisions and provide important information on right whale populations.

I feel very fortunate to work with dedicated personnel from state and federal agencies and from nonprofit organizations in pursuit of such a worthwhile mission.

Simply put, I believe it’s our responsibility. We share the planet with a lot of different plants and animals. We can mess things up. I’d like to count myself among the people who own the problem and fix it.

Kleenex is one of the most prolific mothers of North Atlantic right whales. Scientists estimate she is responsible for 5 percent of the approximately 450 North Atlantic right whales that exist today. In mid-April 2018, disentanglement experts attempted to free Kleenex from fishing rope that had been wrapped around her jaw for at least 3 years, impacting her ability to eat. As a result, her physical condition at the time was poor. They were able to partially cut the line on Kleenex and are hopeful that the weakened line will deteriorate and be shed naturally over time. More than 85 percent of right whales have entanglement scars, and this number has gone up every year for the past several decade

Last updated by Office of Communications on December 10, 2021