Federal, state, tribal, and other partners join to plan recovery of the native species. 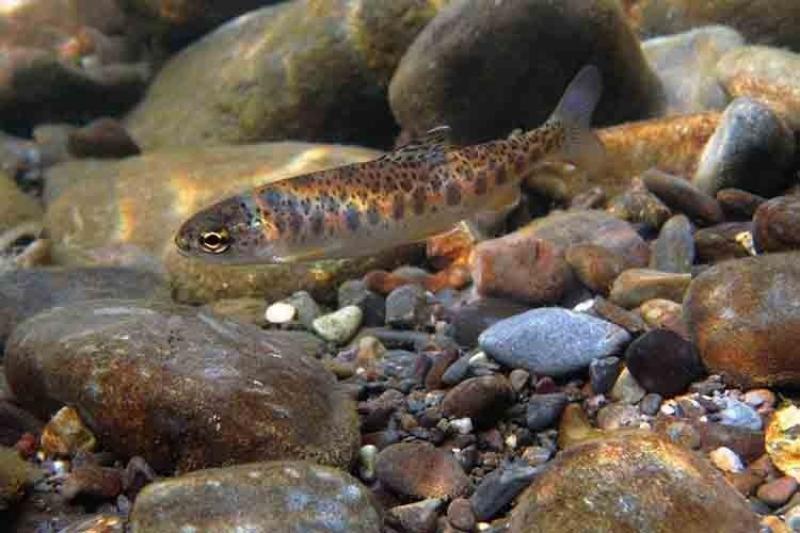 Some 8,000 aging culverts under roads and driveways around Puget Sound block threatened Puget Sound steelhead from reaching high headwaters streams where they historically spawned. These culverts form a major obstacle to the species’ recovery.

A new recovery plan developed under the Endangered Species Act for Puget Sound steelhead addresses these impassable culverts and other threats. It provides a roadmap to help the native fish recover into self-sustaining populations and resume their prominence in Puget Sound. NOAA Fisheries developed the plan with help and support from many partners.

Nearly 1 million wild adult steelhead historically returned to Puget Sound rivers but fewer than 5 to 10 percent of that return today. Puget Sound steelhead were designated as threatened in 2007, bringing them under the protection of the Endangered Species Act.

“Puget Sound steelhead are remarkably resilient, but they have been pushed to the limit by decades of habitat loss, and adverse marine conditions,” said Elizabeth Babcock, North Puget Sound Branch Chief in NOAA Fisheries’ West Coast Region. “Based on the best available science, this plan is a solid and comprehensive blueprint for recovery.”

Steelhead are highly valued by Northwest tribes, prized by fishermen, and preyed upon by endangered killer whales. Recovering them would provide ecological, cultural, and economic benefits.

NOAA Fisheries asked for comments on a draft recovery plan last year. After considering those comments, the agency issued this final version. The recovery plan is not regulatory. Rather, it provides a blueprint for agencies, organizations, tribes, and others working toward recovery of Puget Sound steelhead.

“This plan helps steer actions where they will make the most difference for fish,” said Dave Price, Puget Sound Recovery Coordinator. “We have many excellent partners who are working on behalf of steelhead recovery, and this plan provides a guide.”

The Challenges At Hand

The harvest of Puget Sound steelhead has been greatly reduced in recent decades. Some risk remains that fishing for hatchery-origin steelhead and salmon can result in incidental or unintentional catch of these threatened steelhead.

Two key strategies for the species’ recovery are removing culverts that block fish passage and improving early marine survival. The number of impassable culverts under roadways has increased with continuing urban and suburban growth throughout the Puget Sound region. According to the plan, survival of juvenile steelhead as they first enter Puget Sound from streams and rivers is also poor. Scientists at NOAA’s Northwest Fisheries Science Center have tracked young steelhead. They found that only 3 to 39 percent of juvenile Puget Sound steelhead survived their first few weeks in Puget Sound.

Research has attributed some of the losses to growing populations of predators such as harbor seals. However, the loss of nearshore habitats where juvenile fish grow has also taken a toll.

Recovery and the Long Road Ahead

To reach recovery, Puget Sound steelhead must meet criteria for abundance, productivity, diversity, and spatial structure identified in the plan. The main threats to the population must be addressed so that the fish will not be at risk of extinction again in the future. The recovery plan projects that it may take at least several decades, and possibly up to 100 years, to achieve that goal.

“It took a lot of collaborative work by the Puget Sound Steelhead Recovery Team to put this plan together, and it gives us the game plan that we need,” Babcock said. She stressed that there are roles for many partners in the effort—from tribes and local counties to watershed groups and private landowners. “It will take a great deal of collaboration across many sectors and jurisdictions to reach recovery.”