Pilot System Could Return Endangered Salmon to Their Historic Habitat 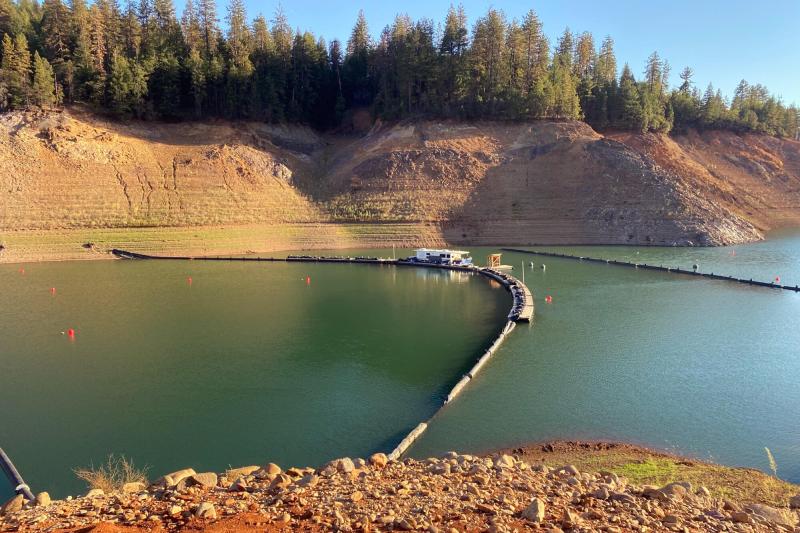 An experimental system stretches across the McCloud Arm of Shasta Reservoir. The system undergoing testing is designed to guide juvenile salmon to a collection point where they can be gathered and transported to the river below the reservoir. Photo by California Department of Water Resources.

State and federal biologists and engineers, in partnership with the Winnemem Wintu Tribe, have begun testing an experimental system in Shasta Reservoir. It could help collect young salmon from the McCloud River in future years and return them to their historic habitat.

The Juvenile Salmonid Collection System is a pilot project 6 years in the making. It is part of a long-term effort to help fish better survive California’s hotter, drier future and more extreme droughts. The collection system will float in the McCloud River arm of the reservoir and guide cold water toward a collection point. This cold water flows down from the Shasta-Trinity National Forest. The initial testing is running from September to mid-November. It will not involve salmon but will use temperature and hydraulic measurements to assess the operation and performance of the collection system.

If successful, the system will be tested in future years with salmon to determine its efficacy and if it can be a critical part of winter-run salmon reintroduction. Biologists expect that juvenile salmon will follow the colder water to that collection point. They can be retrieved there and transported downstream around the dam to continue their migration to the ocean.

Recovery plans call for returning endangered Chinook salmon to their original spawning grounds in the cold McCloud River above Shasta Reservoir. The fish may better survive drought and climate change in that cooler habitat. Juvenile salmon hatched in the river need to be collected as they migrate downstream before or just after they enter the reservoir. The reservoir is home to warmer waters and predators.

"This is an innovative and important project that comes at a critical time for endangered winter-run Chinook salmon," said Scott Rumsey, Acting Regional Administrator for NOAA Fisheries West Coast Region. "While we will need a few years to move this ahead, we have no time to waste in preparing this native California species for the rising challenges of climate change."

Reintroduction efforts strive to reestablish endangered winter-run salmon in colder, high-elevation rivers where they once spawned before reservoirs blocked their migration. This would improve their resilience to a changing climate and could allow for more flexibility in managing water in the Sacramento River.

An important component of the project has been the commitment of state, federal, and regional authorities to Tribal engagement. Strategic efforts and planning have been enhanced with the support and commitment to developing a partnership with the Winnemem Wintu Tribe. The participation of the Tribe brings unique perspectives and incorporates Tribal knowledge to the project.

This is the first step in creating the infrastructure necessary to connect winter-run Chinook salmon in the Sacramento River with cold-water spawning and rearing habitat in the McCloud River.

The testing of the collection system is a separate effort from the transfer of about 40,000 winter-run eggs from the Livingston Stone National Fish Hatchery to the McCloud River. They incubated in the hatchery throughout the summer. That effort, supported by project partners, was an urgent response to the severe drought and will improve the salmon’s odds of survival this year.

The testing of the system will require intermittent restricted access for boats in the upper McCloud arm of the reservoir, as the system spans the entire channel. California Department of Water Resources and contractor staff will be on site.

Partners on the project include: