Researchers record the sixth olive ridley sea turtle nest in the Hawaiian Islands in three decades, thanks to quick reporting by members of the public! 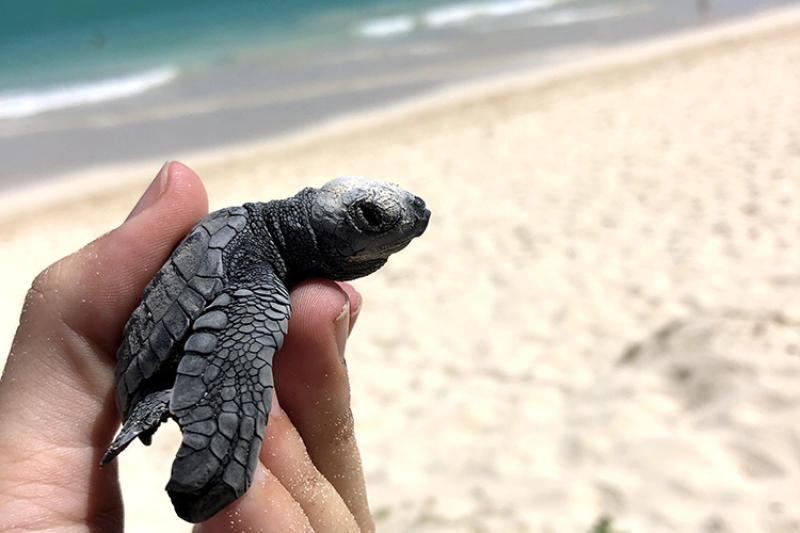 Imagine the surprise and excitement of finding a sea turtle nest hatching under your beach blanket during your island vacation. Then to discover that nesting by that species is extremely rare across the entire archipelago!

Two visitors to Hawaiʻi, Ben Zitney and Sarah Wagner, found just that—about 30 baby sea turtles emerging from a nest—directly under their towel! They quickly moved the towel, stepped back and watched, fascinated, as the hatchlings scrambled over the beach and made their way to the ocean.

Zitney and Wagner were elated by their observations and curious to know about the species. Two species of sea turtle traditionally nest in Hawaiʻi: green sea turtles and hawksbill sea turtles. Green turtles are much more common, but neither typically nest on Oʻahu. More than 95 percent of all green turtle nesting occurs in the Northwestern Hawaiian Islands. Hawksbill turtle nesting occurs primarily on the islands of Hawaiʻi and Molokaʻi. Usually there are no more than 10 green turtle nests on Oʻahu per year. 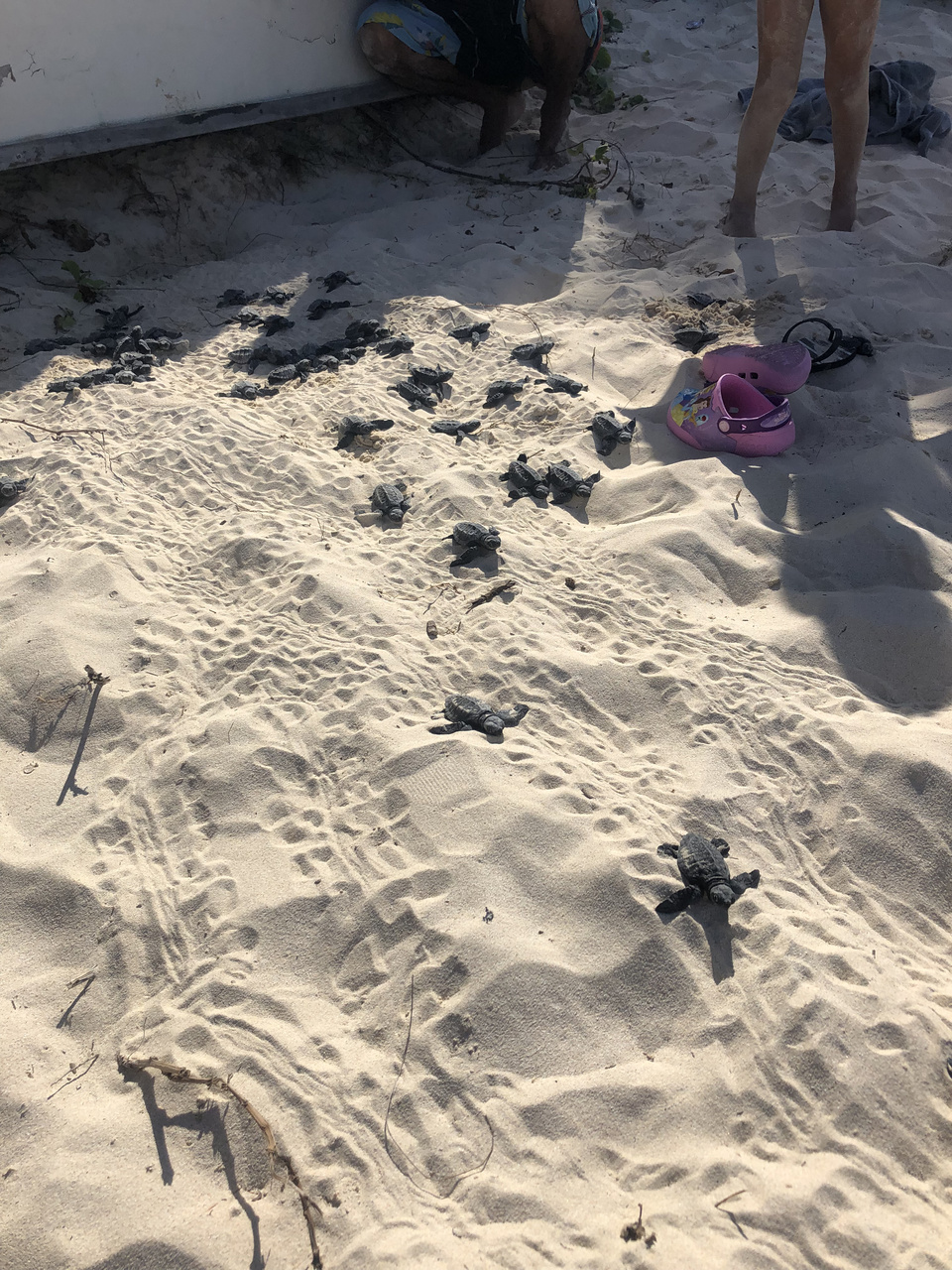 Approximately 30 olive ridley hatchlings crawling to the sea after found emerging from under a towel at Kailua Beach Park.

Zitney and Wagner showed photos of the hatchlings to a local biologist, who noted the coloration was different from green turtles and suggested they might be hawksbills. They searched online for hawksbill turtles in Hawaiʻi and came across HIhawksbills.org. There, they shared their pictures with hawksbill turtle aficionado Cheryl King on Maui. King contacted members of NOAA’s Marine Turtle Biology and Assessment Program on Oʻahu. Zitney and Wagner’s quick reporting helped bring scientists together to solve this mystery.

NOAA researcher Dr. Alexander Gaos instantly recognized the hatchlings as olive ridley turtles. He had experience working with this species along the Pacific Coast of the Americas. “My initial thought was, no way!” stated Gaos. “Although olive ridley turtles can be found swimming throughout much of the Pacific Ocean, their main nesting areas are located along Central America and India. Nesting in the Pacific Islands, including the Hawaiian Archipelago, is extremely rare and I was excited about the extraordinary finding.”

Gaos immediately wrote Zitney and Wagner for the exact location where the hatchlings emerged. Scheduled to fly out the following day, they responded within minutes and agreed to meet up. An hour later, Gaos arrived at Kailua Beach Park with NOAA sea turtle researchers Lindsey Bull and Alexandra Reininger. 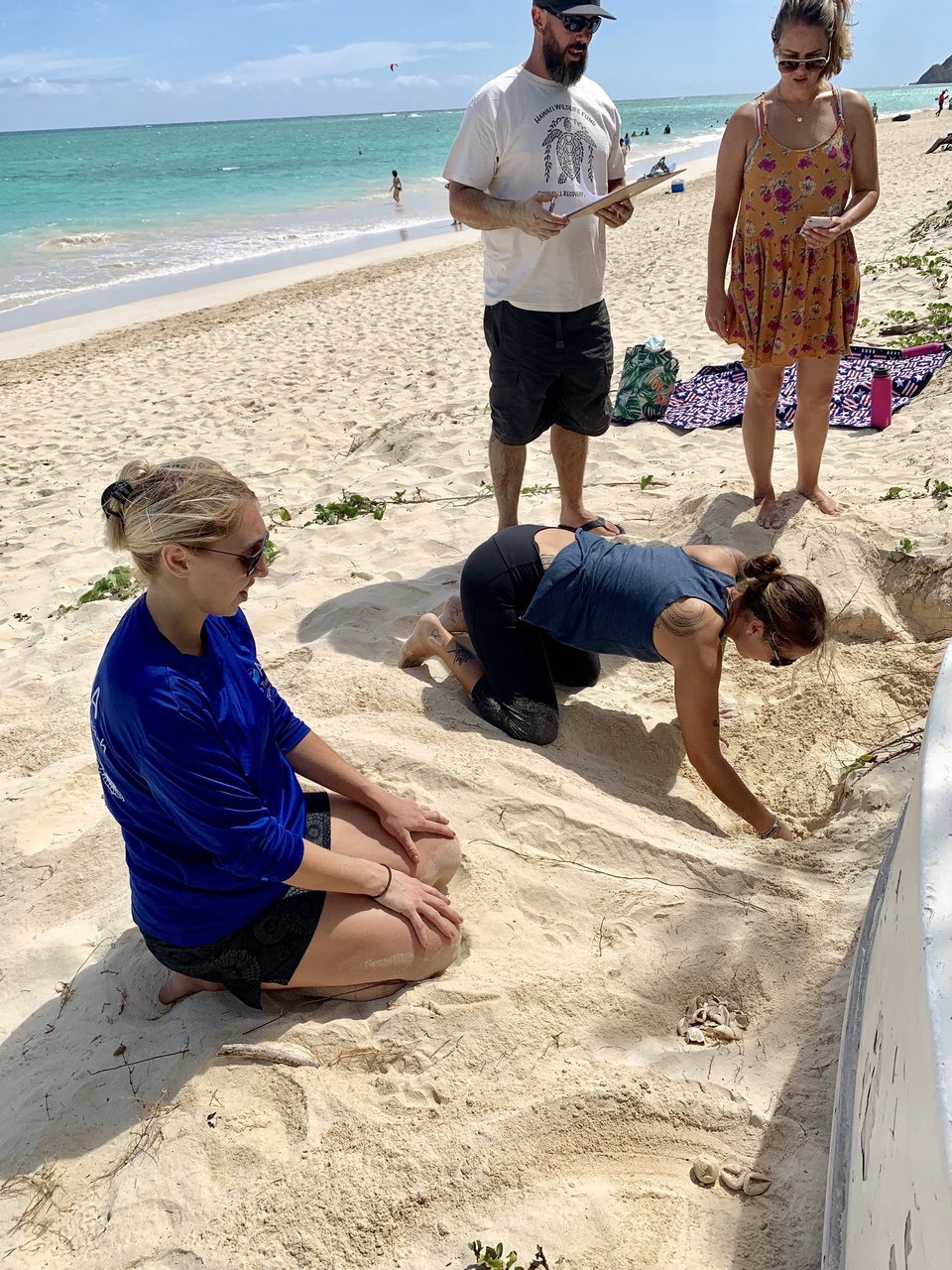 The group went to the hatching area and searched for the nest. If located, they could confirm the species and rescue any hatchlings still trapped in the nest. “While emerging from their eggs, sea turtle hatchlings simultaneously flail their bodies and flippers, causing sand to percolate down and bringing the whole group to the surface, a bit like an elevator,” explained Bull. “Any hatchlings that fail to get in the elevator often end up trapped at the bottom of the nest.”

After a few minutes of digging, the team found the first few empty egg shells. The nest contained 72 eggs, 64 of which successfully produced hatchlings, for an overall hatching success rate of 88.9 percent. The team also rescued two hatchlings that were stuck at the bottom of the nest. They were released and quickly crawled into the sea. “It was a really cool thing to be a part of and we feel so fortunate,” Zitney commented after the excavation. “We’re glad we were able to get in touch with the NOAA researchers, participate in the nest excavation and learn more about these enigmatic creatures.”

Locating the nest allowed NOAA researchers to evaluate how many eggs successfully produced hatchlings, as well as the potential cause of any eggs that did not. “The information generated from nest excavations provides important data for sea turtle population modelling and trend analyses,” stated Reininger. “The results of those analyses can be used to help determine the most appropriate management actions.” 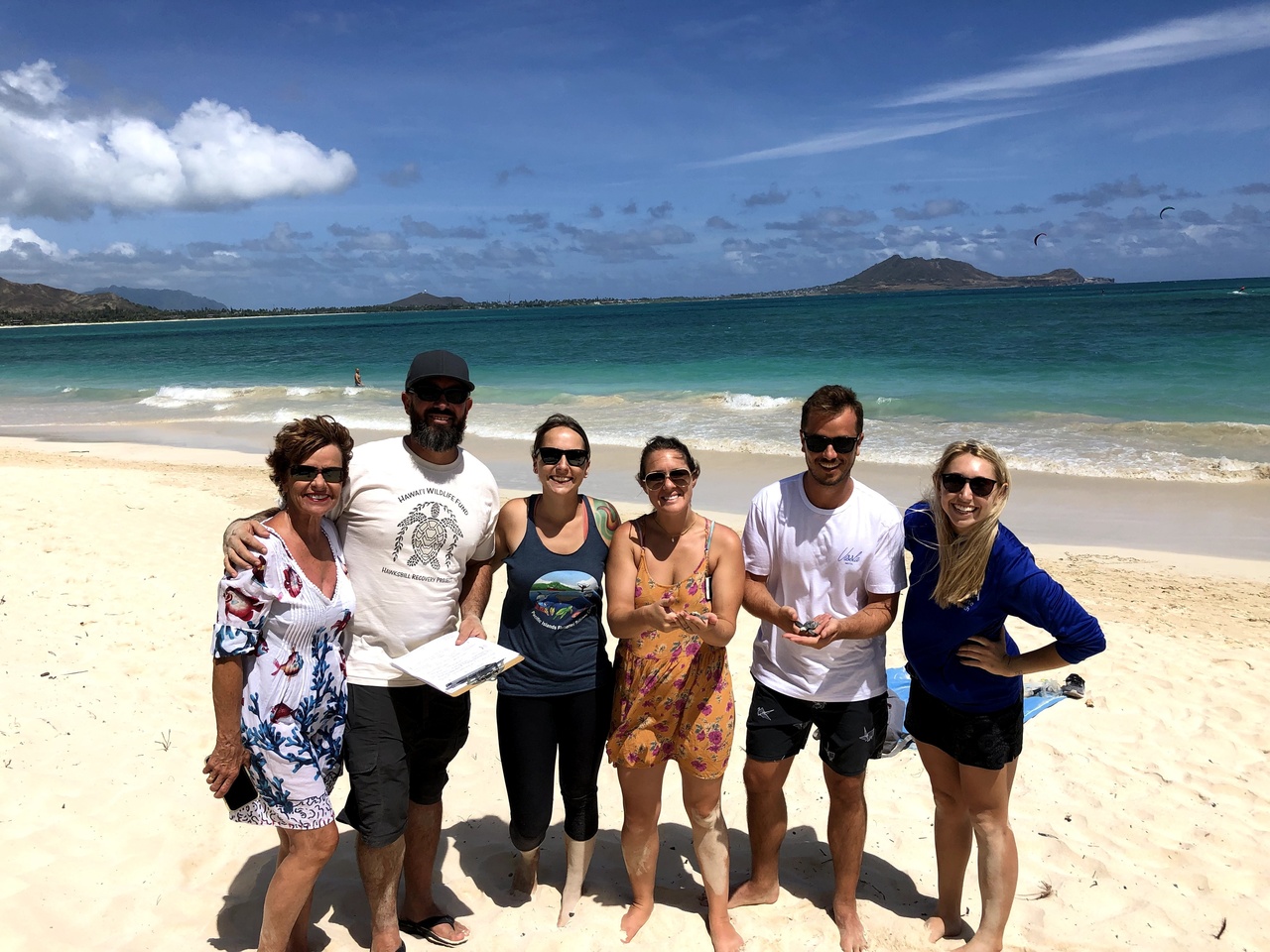 What’s Next for the Hatchlings

Emerging baby sea turtles are called “hatchlings” because they are reptiles and hatch from eggs. Young sea turtles typically spend the first several years of their lives out in the open ocean, drifting with the currents. They feed on small invertebrate animals at the ocean’s surface. This period is also known as the “lost years” because it is difficult for researchers to track where the turtles are and what they are doing during this life stage. Afterward, turtles typically move back to nearshore waters where they continue to feed and grow. When they reach sexual maturity, they return to the nesting beach where they hatched.

Will those olive ridley hatchlings return as adults? As Dr. Gaos explained, “very few hatchlings survive to adulthood, but this type of irregular nesting behavior is exactly how they colonize new areas over time. A random turtle goes to a ‘new’ beach and lays one or more nests, some of the hatchlings survive, they return as reproductive adults and lay nests of their own, and the cycle continues until a population is established. It takes at least 20 years for a turtle to mature to reproductive age, so it’s far too early to tell the fate of these olive ridley hatchlings.”

“We never would have known about this nesting event if it weren’t for the initiative and quick reporting of Ben and Sarah,” continued Gaos. This olive ridley nest at Kailua Beach Park represents only the sixth record of the species nesting in the Hawaiian Archipelago. The other records include two on Oʻahu, two on Hawaiʻi, and one on Maui.

Olive ridley turtles are listed as threatened under the U.S. Endangered Species Act and as vulnerable on the International Union for Conservation of Nature’s Red List. The primary threats to the species include accidental capture (bycatch) in fishing gear such as longlines, trawls, and gillnets, as well as nesting beach degradation. Entanglement and ingestion of debris in our oceans is also a continuing threat.

NOAA encourages the public to report any nesting events or marine animal emergencies they encounter through the Hawaiʻi Statewide Marine Animal Emergency and Reporting Hotline: (888) 256-9840. You can report strandings, injuries, suspicious activity, and any unusual events involving sea turtles, as well as events involving monk seals, dolphins, and whales.

For additional information on this story, contact Dr. Alexander Gaos. 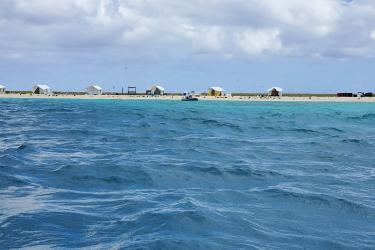