Researchers are the first to use otolith age-based techniques to describe the growth, mortality, and reproduction of two culturally and commercially valuable coral reef fish in Saipan. 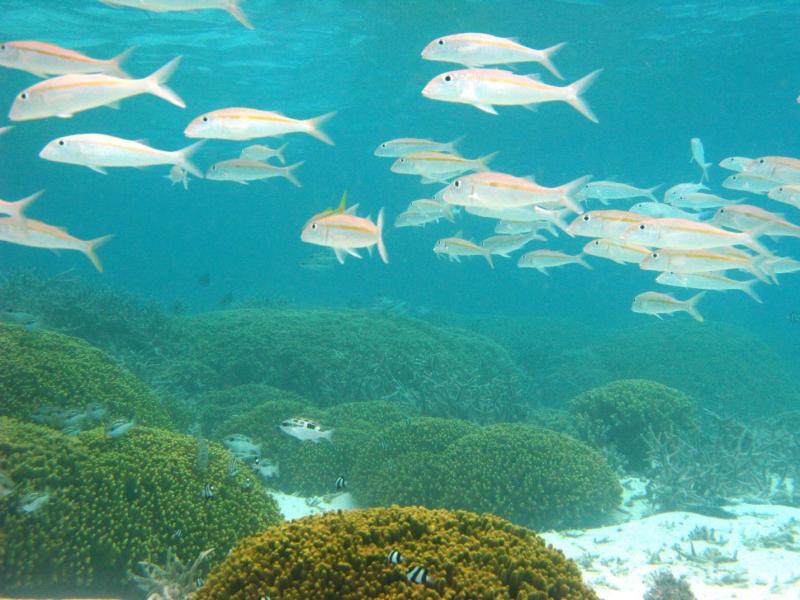 Scientists in the Pacific Islands region published new research on two species of goatfish: dash-and-dot (Parupeneus barberinus) and yellowstripe (Mulloidichthys flavolineatus). Both species are from the Saipan fishery in the Commonwealth of the Northern Mariana Islands (CNMI). This is the first publication on both species for the region, providing valuable context for management involving coral reef fishes. How old a species gets, how fast it grows, and when and where it spawns is all important information to help us maintain sustainable populations for the future.

Erin Reed and Dr. Brett Taylor found that both species of goatfish were short-lived, aging no more than 5 years. They also grow and mature quickly. Age-based information is some of the most valuable for assessing commercial fish populations in order to sustainably manage these fisheries. The authors examined fish otoliths (inner ear bones), which form yearly rings similar to the rings of a tree. They used the otoliths to describe species age, growth, mortality, and reproduction characteristics.

Reed and Taylor found an extremely high percentage (96.6 percent) of coral reef fish caught and sold at fish markets were from one main fishing area: Saipan lagoon. Saipan lagoon is known to be a popular fishing area. This is the first paper to quantify the extent to which the lagoon plays a part in the region’s commercial coral reef fishery. The NOAA-sponsored U.S. Territories Commercial Fisheries Bio-sampling Program provided data from weekly sampling of fish markets to track biological and population characteristics over time.

A unique story unfolded when it was discovered that, despite the two related species living in the same environment, they displayed different spawning behaviors. The yellowstripe goatfish is a popular species snorkelers see throughout the Indo-Pacific. Hawaiʻi, Guam, and CNMI consider them culturally important for fishing on the adults and during the seasonal juvenile runs. This species of goatfish spawned spring to summer with a second peak in the fall, mostly during the third quarter lunar phase. During this time, the temperature was approximately 82.4 to 85 degrees Fahrenheit (28–29.5 degrees Celsius) within the Saipan lagoon.

On the other hand, scientists had to work a little harder to gather information on the spawning behavior of the dash-and-dot goatfish. Scientists used several pieces of information to assess this species' spawning behavior, including what they were not seeing: females with eggs developed enough to spawn that season. Alternatively, they examined other physiological characteristics to determine the maturity of more than 600 female specimens collected over several years. The combined maturity information from a wide size range across several years of data was enough information for a hypothesis. They hypothesize that the dash-and-dot goatfish migrates to spawn outside of the Saipan lagoon; therefore, the Saipan fishery does not catch actively spawning females.

Researchers consider a species “data poor” when there are few or no records of biological characteristics such as the age, growth, mortality, and reproduction. This research on dash-and-dot and yellowstripe goatfish will help to serve effective management of these commercial fish populations for years to come.