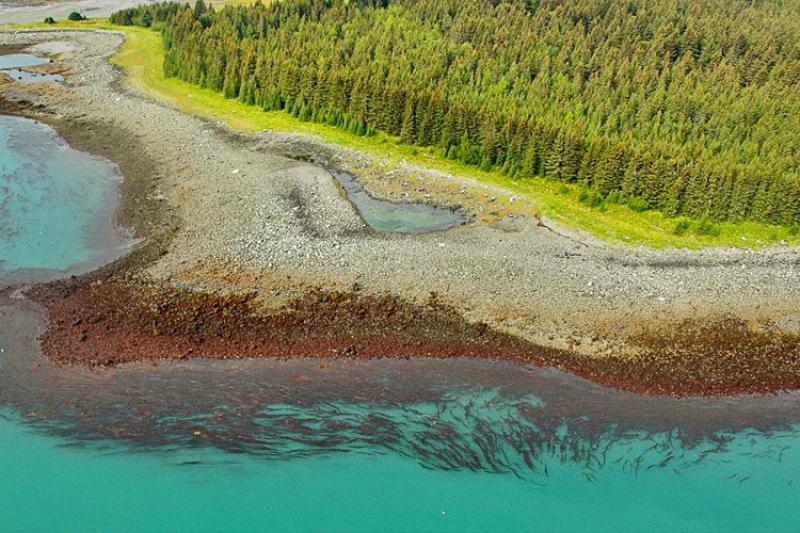 Scientists involved in the Alaska ShoreZone program have been steadily imaging and mapping Alaska’s rich coastal habitats since 2001. Over ninety percent of Alaska’s approximately 80,000 km of coastline has been completed, but gaps remain. During NOAA Fisheries’ Habitat Month in July 2018, imaging experts are filling in one of those gaps - Glacier Bay National Park and Preserve in Alaska’s southeast panhandle.

Over five days in July, an imaging crew is flying the inner bay of the park, an estimated 1,172 km during low tide windows. This is the optimal time for imaging with some of the lowest tides of the summer (maximum low reaching -1.45 m or -4.8 ft).

“Because of these excellent tidal conditions we are able to capture on camera the greatest extent of the coastal zone,” said NOAA Fisheries Mandy Lindeberg, project coordinator. “With this, we can establish a baseline for marine resources and habitats in the area.”

Once the imaging surveys are completed, we will undertake post-processing and quality control. We expect video and still imagery to be available online within several months.

Over the next year habitat mappers will study the imagery and create a digital shoreline with associated geomorphic and biological data layers using a standardized classification system.

What Can Be Seen in a ShoreZone Images?

A surprising amount of information can be acquired from a ShoreZone image. For example, mappers recorded the following key information from the Pt. Carolus image above: the length of the shore unit (685 m), habitat type (semi-protected, partially mobile rock and sediment), coastal class (sand and gravel flat fan), environmental sensitivity index (sheltered tidal flats), and the oil residency index (moderate persistence of oil in substrate for months to years).

Biological attributes or “biobands” seen alongshore in this image from the top of the beach to the bottom are: patchy Dune grass (Elymus mollis), patchy salt marsh, continuous sedges, a narrow marine lichen band (Verrucarria spp.), patchy barnacle band, continuous red algal band, continuous Alaria kelp band (Alaria marginata), and a continuous Dragon kelp (Eualaria fistulosa) band in the water. Each of these biobands have known species assemblages (groups) within that so we can learn more about habitat diversity by studying them.

All georeferenced imagery and habitat data layers are publicly available using the ShoreZone online platform with navigation and query tools.

If you simply want to view the imagery and see Alaska’s incredible coastal zone this is a great place to get started.

Funding through NOAA Fisheries Alaska Regional Office and a partnership with the U. S. National Park Service made the Glacier Bay surveys possible.

Last updated by Alaska Fisheries Science Center on May 30, 2019