An entangled North Atlantic right whale, known as Snow Cone, and her newborn calf have been spotted multiple times since December 2021. If you see them, or any right whale, move at least 500 yards away—it’s best for the whales and it’s the law. 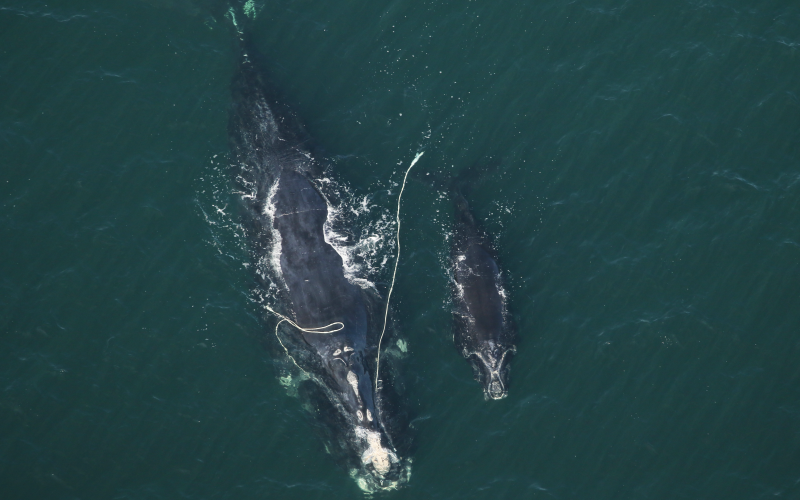 The entangled North Atlantic right whale known as “Snow Cone'' gave birth to her calf at the end of 2021. Since then, she and her newborn have been spotted multiple times off the coasts of Georgia and northeastern Florida by trained experts and beach-goers alike. She and her calf are swimming in the right whale calving grounds, a NOAA Fisheries-designated critical habitat. And while we are tracking 13 mother-calf pairs so far this season, this mighty and resilient whale has attracted a special following.

Snow Cone was first observed entangled in March 2021, dragging thick, heavy fishing rope hundreds of feet long. Based on the severity of her entanglement, we determined that Snow Cone was seriously injured, meaning that she would likely die due to the entanglement.

Through a series of disentanglement rescue operations, highly-trained NOAA partners removed hundreds of feet of the rope, which improved Snow Cone’s likelihood of survival.

On December 2, 2021, an aerial survey team observed a newborn calf swimming alongside Snow Cone near Cumberland Island, Georgia. Trained disentanglement responders assessed the situation by boat. They determined that trying to remove or further shorten the rope would be too dangerous with a newborn calf present. Right whale calves swim very close to their moms, making a safe approach by responders highly problematic if not impossible.

Since then, Snow Cone and her calf have been seen again on 12 separate days, sometimes multiple times per day. In several of the sightings, the mother-calf pair have been swimming very close to the shoreline, less than half a nautical mile away.

On January 6, in a family reunion of sorts, Snow Cone and her newborn calf were spotted alongside a 1-year-old male right whale. That whale was the calf of “Chiminea,” who happens to be Snow Cone’s sister. This nephew and cousin interacted with the pair, but had moved elsewhere by the time Snow Cone and her calf were sighted again a couple of hours later.

Recently, Snow Cone and her calf have been moving southward and have been seen from shore several times. On January 13, 2022, Florida Fish and Wildlife Conservation Commission sighted them just off Flagler Beach, and on January 19, off Amelia Island, Florida. They were able to closely document the entanglement. The rope was coming out of both sides of Snow Cone’s mouth and was wrapped around and embedded in her upper jaw. Even with the rope entanglement, so far Snow Cone’s and her calf’s physical appearance and body condition are visually similar to the other right whale moms and calves in the Southeast U.S. calving area.

NOAA Fisheries biologists and partners are closely monitoring this mother’s and calf’s health, as well as the fishing rope that remains entangled in her mouth. “The high-quality photos and videos that our partners have been taking with each sighting are doing a lot to help our biologists monitor Snow Cone’s and her calf’s health, along with the status of the entanglement,” said Dr. Deborah Fauquier, a NOAA Fisheries veterinary medical officer who coordinates the agency’s response and investigation for the Unusual Mortality Event.

“We’re now arranging for thermal imaging in an effort to better assess the wounds on Snow Cone’s rostrum,” noted Dr. Fauquier. NOAA Fisheries and partners have also discussed potential actions for on-water teams should any dangerous or unexpected circumstances arise for Snow Cone and her calf.

Still, with all of the information gathered from recent sightings, biologists and veterinarians do not believe Snow Cone is currently in life threatening danger. This means we can plan and respond when the timing is right.

Response operations require considerable preparation and coordination from highly trained specialists. Large whale disentanglement operations can be extremely dangerous. Adult North Atlantic right whales are large and powerful, weighing up to 140,000 pounds, and their movements can be unpredictable. People, including trained responders, have died while attempting to rescue entangled whales.

It is vital that all mariners and boaters along the Atlantic coast be mindful of the potential presence of right whales. Mother-calf pairs are especially vulnerable to collisions with ships and boats as they spend the majority of their time at, or near, the water's surface. (Snow Cone lost her last calf to a vessel strike.)

No matter the size of your vessel, keep a close eye out for right whales when on the water. Stay updated on areas where right whales are likely present, and keep your speed to under 10 knots when in these areas. Right whales can be difficult to spot from a vessel. Stay vigilant and if you see something dark in the water and are in possible right whale habitat, give it plenty of space.

If you see a right whale in need of help, move at least 500 yards away from the whale and report the situation by either:

Report the location of the sighting, and if you are able, try to take pictures or video of the whale from a safe distance (at least 500 yards away). The more information responders have, the better prepared they will be. If you can, please continue to stay with the animal from a safe distance until rescuers arrive; a whale with no one standing by is less likely to be found again.

Following these guidelines will make a difference in saving this species from extinction.

Give Right Whales Space–It’s the Law

Members of the public should not approach entangled whales. It is against the law to be within 500 yards of a right whale (the length of five football fields). This law includes all vessels, aircraft, and uncrewed aerial vehicles (drones).

Attempting to cut and remove rope yourself is extremely dangerous, both for you and the whale. When there’s a calf involved, there are even more risks. Being approached can be very stressful for the mother and calf and may cause them to become separated. Trained responders have specialized equipment that allows them to operate at a greater distance from an entangled whale. This is safer for both the team and the animals.

Last updated by Office of Communications on July 13, 2022