The North Atlantic right whale is one the world's most endangered large whale species. Entanglement in fishing gear is one of the greatest threats to these whales. Learn how NOAA Fisheries and its partners reduce the risk of entanglement in this Q&A. 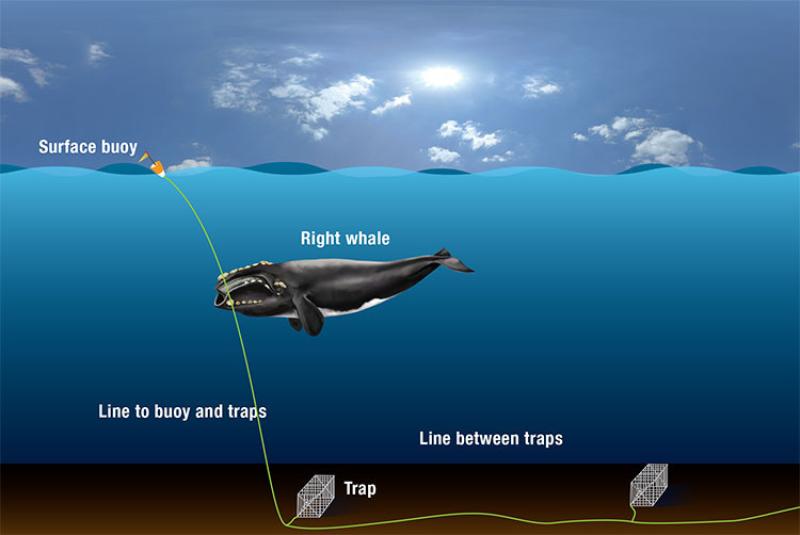 Illustration of how North Atlantic right whales get entangled in fishing gear. Entangled whales can tow fishing gear for tens to hundreds of miles over months or even years, before either being freed, shedding the gear on their own, or succumbing to their injuries. Credit: Graphic Services, Woods Hole Oceanographic Institution

Editor's Note December 9, 2021: When this interview was conducted in 2018, there were an estimated 450 North Atlantic right whales remaining. Today, that number is less than 350 based on the latest preliminary estimate. Recent studies suggest that more than 85 percent of North Atlantic right whales have been entangled in fishing gear at least once. About 60 percent have been entangled multiple times.

Along with vessel strikes, entanglement in fishing lines attached to gillnets and traps on the ocean floor is one of the greatest threats to the critically endangered North Atlantic right whale. Becoming entangled in fishing gear can severely stress and injure a right whale, slow it down, decrease its overall fitness (which scientists gauge by observing body condition such as blubber thickness), and lead to a painful death. For females, the stress reduces the likelihood that they will bear healthy offspring. While commercial whaling decimated the population almost to extinction over a century ago, the modern era threats of vessel strikes and entanglements continue to suppress recovery of the species. Reports suggest 85 percent of right whales have entanglement scars, and the number of right whales with entanglement scars has gone up every year for the past several decades. 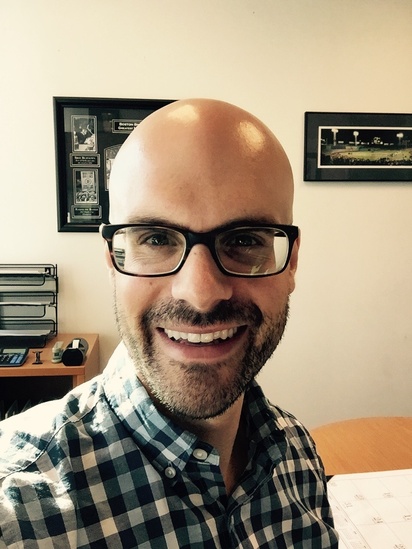 Mike Asaro, Ph.D., is the Marine Mammal and Sea Turtle Branch Chief of the NOAA Greater Atlantic Regional Fisheries Office. Learn more about his work with North Atlantic right whales and how NOAA, in coordination with the Atlantic Large Whale Take Reduction Team, is coming up with innovative technologies and policies to reduce gear entanglements.

How did you get into working with North Atlantic right whales?

I have a background in environmental science, management, and policy. My approach is from the policy end—I love studying people and systems to see the way human behavior affects certain species. Looking at commercial fisheries and how they affect North Atlantic right whales is very personal for me—I’m a native of Gloucester and my grandfather was a lobsterman. I can still remember my first trip with him at 5 years old. Sometimes the impression is that we are at odds with the fishing industry, but really we want to promote, encourage, and expand sustainable fisheries while protecting species at the same time.

How do you come up with ways to reduce gear entanglements?

The Atlantic Large Whale Take Reduction Team is a 60-person team of stakeholders that advises NOAA in developing plans to mitigate fishing gear’s risk to whales and addresses the serious injury and mortality of large whales in gillnet and trap/pot gear. The process starts with scientific research from necropsies (i.e., animal autopsies), law enforcement investigations, stranding network partners, and academic studies. Then the team brainstorms solutions based on that research and makes recommendations to NOAA. We rely on open dialogue and advice from fishermen on things they observe at sea and what might work. Those proposed solutions go to NOAA, which after review and approval, puts them into practice.

Over the years, the Take Reduction Team has implemented several measures to reduce the risk of entanglement, including eliminating nearly 30,000 miles of rope from the water column and removing gear from 32,000 square nautical miles of ocean through seasonal gear closures. For example, no commercial fishing is allowed in Cape Cod Bay in the spring when right whales are feeding in the area. The team has also developed gear modifications, like weak links in the lines that will break if a whale comes through, and sinking ground line ropes rather than floating lines to connect lobster pots.

In addition, NOAA requires colored marks on gear that correspond to its type and location. Right whales are so strong that when they encounter gear, they often drag it away, making it difficult to tell where it came from. When we recover gear—either via a disentanglement or from a dead whale—our gear experts in the region help identify the gear (gillnet, lobster trap, etc.) and where it came from. This information can help us identify problem gear or areas.

We’re also always looking for new ideas – and the Take Reduction Team is currently investigating new technologies. Could fishermen use weaker ropes? Rope strength has increased dramatically in the past 20 years, which may be better for fishermen but worse for whales. The Take Reduction Team is also exploring new technologies that can enable ropeless fishing gear as an alternative to gear currently being used. This would help eliminate all buoy lines for traps by utilizing tracking devices that allow fishermen to set their traps, and then relocate and retrieve them later. However, much more research, experimentation, and development is needed to make the technology successful and widely available.

So better technology is the answer to entanglements?

There’s a lot of new technology being developed around the world, particularly with new ropeless fishing gear. We encourage the Take Reduction Team to explore new technologies on the horizon in close collaboration with engineers, fishermen, and whale biologists.

The big question is always the “Why?” as in “Why is it important to protect these whales?”

North Atlantic right whales are an iconic species of our oceans and have suffered greatly in recent times. All of the species of large whales play pivotal roles in the oceanic food web and ecosystem, and North Atlantic right whales are an important indicator of the Atlantic Ocean’s health. With only about 450 individuals remaining, right whales are in serious trouble. Through hard work and collaboration with all interested stakeholders –fishermen, whale researchers, commercial shipping companies, whale watch organization, and environmental groups – we have made significant strides in recovering the population from the whaling era days that we need to see through.