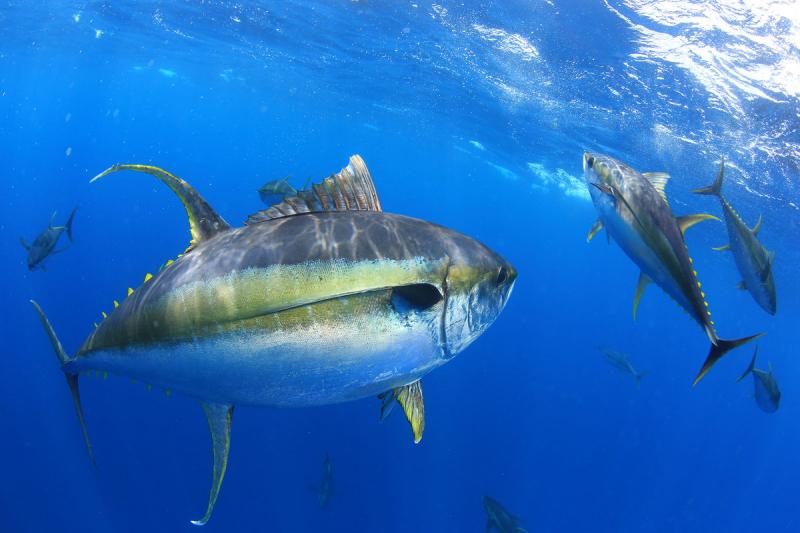 Tropical tuna in the eastern Pacific Ocean gained renewed protections and science-based catch levels under resolutions advocated by the United States. They were adopted by the Inter-American Tropical Tuna Commission at its virtual meeting in October. The IATTC also established a framework for foreign fishing vessels to face spot inspections when they enter the port of another member nation.

The IATTC’s actions will help conserve and sustainably manage tuna and other highly migratory species that cross international boundaries. They also improve oversight of international fisheries to reduce illegal, unreported, and unregulated fishing, a U.S. priority. The move furthers the effort to close the world’s ports to illegal fishing and give consumers additional confidence that their seafood is safe and sustainable.

“This is a critical step forward for the conservation of species that support important commercial fisheries and play a prominent role in the marine ecosystem,” said Ryan Wulff, who leads the U.S. delegation to the IATTC, and serves as Assistant Regional Administrator for Sustainable Fisheries for NOAA Fisheries’ West Coast Region. “We worked through challenging negotiations—all in a virtual setting. In the end, we achieved consensus on a number of important conservation and management measures for the eastern Pacific Ocean.”

The United States has supported the EU proposal since 2010. It advances an international agreement on port state measures developed under the Food and Agriculture Organization of the United Nations to prevent, deter, and eliminate IUU fishing. The UN measure is the first binding international accord to target IUU fishing. It reduces the incentive for vessels to operate illegally and takes steps to block illegal fishery products from reaching national and international markets.

“The IATTC agreement on minimum standards for port inspections is welcomed news,” said Grantly Galland of The Pew Charitable Trusts. “Members will have an effective way to prevent illegally caught fish in the Eastern Pacific Ocean from ending up on dinner tables around the world. And the measure brings the IATTC in line with other regional fisheries Management Organizations, ensuring member governments are on equal footing and able to request implementation help from each other.”

The controls aim to ensure that tuna fishing in the eastern Pacific Ocean is sustainable.

The Commission also adopted controls on fish aggregating devices. The FADS managed by IATTC are floating human-made objects that attract tuna and other species. Vessel operators track FADs through sonar buoys and then fish around them, boosting their catches. The number of FADs has multiplied across the Pacific Ocean in recent years. Although the IATTC previously adopted measures to lower the risk of entanglement in FADs, any netting still has the risk of entangling marine life. Abandoned FADs can also drift through the ocean and become marine debris that further harms marine life and sensitive areas such as coral reefs.

Regional fisheries management organizations have been taking steps to manage FADs to minimize potential concerns related to entanglement, marine debris, and catches of juvenile tunas. The IATTC adopted a measure to gradually reduce the limit on active FADs that each vessel tracks in the eastern Pacific Ocean over the next 3 years. This will help reduce the proliferation of marine debris. Operators must report sonar data from the FADs for scientific purposes and to help track the number of lost FADs. The measure also directs a working group to recommend criteria for FAD materials that can biodegrade or reduce risk to the marine environment.

The IATTC also maintained existing management provisions and increased catch limits for Pacific bluefin tuna. These are consistent with the recommendations of the Joint Working Group between IATTC and the Western and Central Pacific Fisheries Commission’s Northern Committee. The Working Group is an innovative framework to cooperate on fish stocks and management issues that span tuna regional fishery management organizations in the north Pacific. The IATTC also amended a long-term agreement requiring adjustment of catch limits if Pacific bluefin tuna are not expected to meet stock rebuilding targets.

Only the United States and Mexico catch bluefin tuna in the eastern Pacific Ocean. Most of that catch has been taken by Mexico in recent years, but the new IATTC resolution allocated a larger share to U.S. vessels. Most Pacific bluefin catches occur in the western Pacific, caught largely by Japan. Japan catches the most bluefin of any nation in the Pacific and solely fishes in the western Pacific.

The IATTC also extended protections for silky sharks, which are vulnerable to overfishing because they often gather with tuna targeted by purse seines and longline vessels.

“After years stuck in gridlock, it’s a promising sign to see Pacific nations adopt new conservation measures at IATTC,” said Josh Madeira from the Monterey Bay Aquarium, which is known for its program to track the sustainability of fisheries. “Increasing scientific integrity, monitoring and transparency are now more important than ever to ensure that Pacific bluefin tuna and tropical tunas can achieve sustainability.”