The Fisheries Management Plan for U.S. West Coast Fisheries for Highly Migratory Species (as amended April 2018) was developed by the Pacific Fishery Management Council in response to the need to coordinate state, Federal, and international management. NOAA Fisheries, on behalf of the U.S. Secretary of Commerce, partially approved the Management Plan on February 4, 2004. The majority of implementing regulations became effective on April 7, 2004. The reporting and record keeping provisions became effective February 10, 2005. 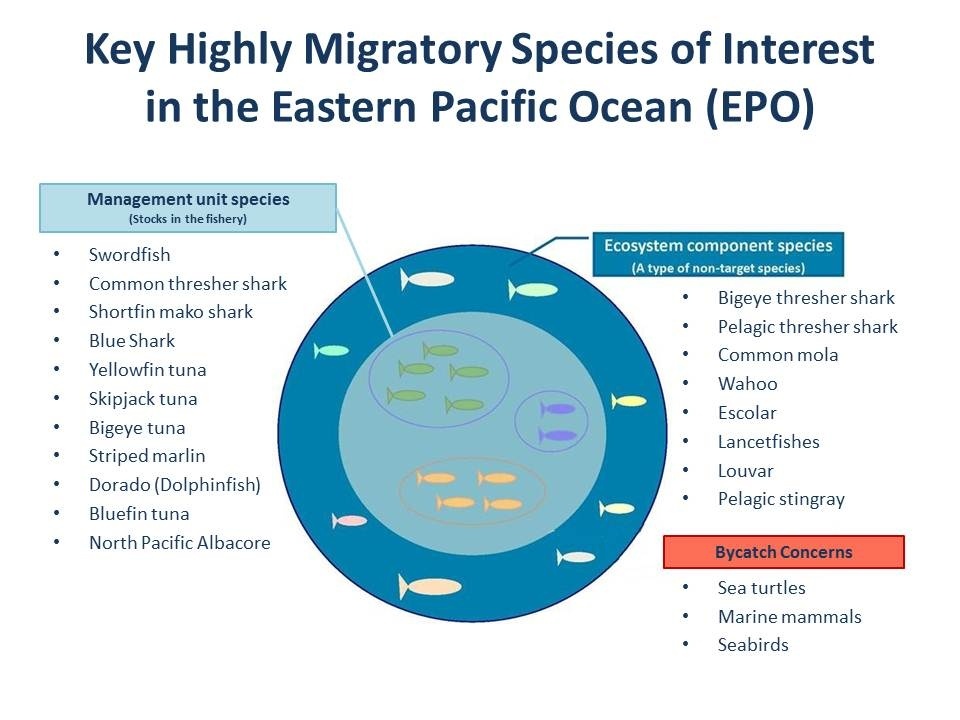 The Highly Migratory Species Fishery Management Plan has been amended twice since its implementation.

Management Measures/Actions under the Magnuson-Stevens Act

Regulations under the Fishery Management Plan for U.S. West Coast Fisheries for Highly Migratory Species apply to U.S. fishing vessels targeting or pursuing highly migratory species within the West Coast exclusive economic zone (EEZ) of California, Oregon, and Washington or the adjacent high seas (seaward of the EEZ) and land their fish in California, Oregon, or Washington. Additional restrictions apply under the High Seas Fishing Compliance Act and for Hawaii longline permitted vessels landing into West Coast ports. The fishery management plan does not apply to U.S. vessels that fish for highly migratory species on the high seas and land into a non-U.S. port.

Fishery rules frequently change, so fishermen must familiarize themselves with the latest regulations and are responsible for complying with the current official regulations set forth in the Code of Federal Regulations at 50 CFR part 660. Fishermen should also check with state authorities before engaging in fishing activities within state waters.

Federal Register Rules and Notices for actions under the Magnuson-Stevens Act:

Highly migratory species move throughout large areas of the Pacific and are fished by many nations and gear types. Therefore, fisheries management by the United States alone is not enough to ensure that harvests are sustainable in the long term.

Regional Fishery Management Organizations (RFMOs) are established by treaties with countries that have fishing interests in particular ocean regions. These organizations adopt living marine resource conservation and management measures that are binding for their members. Regarding HMS in the Pacific, the United States is a member of the Inter-American Tropical Tuna Commission (IATTC), which is responsible for the conservation and management of fisheries for tunas and other species taken by tuna-fishing vessels in the eastern Pacific Ocean (generally east of the 150° W meridian). The United States is also a Member of the Western and Central Pacific Fisheries Commission (WCPFC), which plays a parallel role in the western and central Pacific Ocean (generally west of the 150° W meridian).

To ensure that harvests of highly migratory species are sustainable Pacific-wide, the United States is dependent on other Member and Cooperating Non-Member nations of these tuna Commissions to adhere to their obligations to implement Commission decisions.

The IATTC was established under the 1949 Convention for the Establishment of an Inter-American Tropical Tuna Commission, to manage tuna and tuna-like species including yellowfin, skipjack, Pacific bluefin, and North Pacific albacore tunas in the IATTC Convention Area. In 2003, the Antigua Convention was adopted to strengthen and replace the 1949 Convention and became effective in 2010.

The IATTC assesses the status of tuna, billfish, and shark stocks in the eastern Pacific Ocean to determine appropriate catch limits and other measures to prevent overexploitation of these stocks. Summaries of stock assessments are provided in Fishery Status Reports. The International Scientific Committee for Tuna and Tuna-like species in the North Pacific Ocean (ISC) also conducts stock assessments for some species managed by the IATTC, including Pacific bluefin tuna and North Pacific albacore.

Members participating in the IATTC:

Cooperating Non-Members of the IATTC:

The United States is obligated to implement decisions of the IATTC and WCPFC under the Tuna Conventions Act and the Western and Central Pacific Fisheries Convention Implementation Act.

Regulations implemented under the Tuna Conventions Act, in accordance with resolutions of the IATTC, apply to U.S. fishing vessels targeting or pursuing highly migratory species within the IATTC Convention Area. The recent rules and regulations are available on the link below; however, the current and official list of international fisheries regulations are set forth in the Code of Federal Regulations at 50 CFR part 300.

Federal Register Rules and Notices for actions under the Tuna Conventions Act:

To stay informed on issues relating to the IATTC, join our email distribution list. Information shared may include changes to regulations (e.g., notice of proposed rules implementing IATTC resolutions available for public comment), upcoming meetings (e.g., annual IATTC meetings), and updates to highly migratory species management measures adopted by the IATTC. To receive (or unsubscribe to) these emails, please send a request that includes your first name, last name, and affiliation to: William.Stahnke@noaa.gov.

These documents serve as Small Entity Compliance Guides, complying with section 212 of the Small Business Regulatory Enforcement Fairness Act of 1996.