Another Dead Gray Whale Discovered in Alaska, This Time Near Cordova 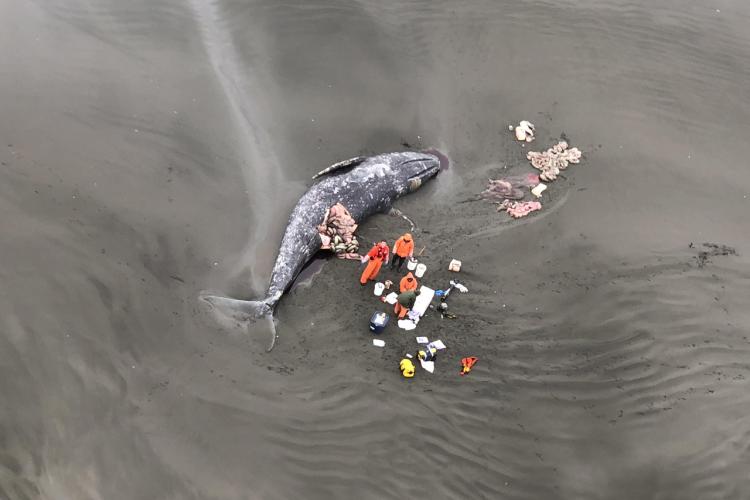 A NOAA-authorized team of marine mammal biologists performed a necropsy Sunday on a dead gray whale beached in the Copper River Delta, near Cordova, Alaska. The biologists — aided by the U.S. Coast Guard — spent approximately two and a half hours on Egg Island collecting tissue samples from the 42-foot long young adult female. 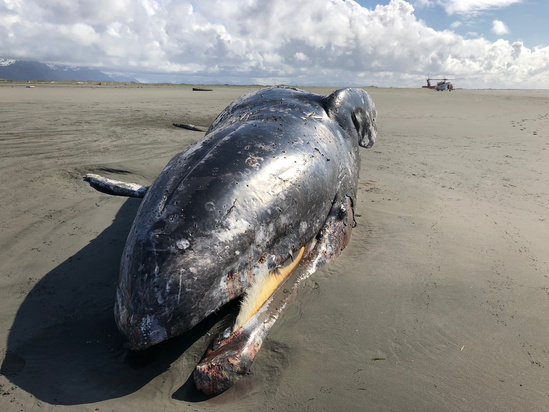 NOAA first received report of the dead whale on May 14, but the tide carried it offshore. A Kodiak-based helicopter crew from the U.S. Coast Guard relocated the whale on Friday, May 17. The USCG responders collected tissue samples and photos for NOAA biologists.

NOAA Fisheries and our stranding partners are tracking a spike in gray whale mortalities along the west coast of the United States during their spring migration. To date, 60 gray whales have been reported stranded dead along the west coast, from Mexico to Alaska. Of those necropsied, many were found to be skinny and malnourished.

Although the recent necropsy near Cordova did not immediately reveal a cause of death, it did provide scientists with the opportunity to collect samples to determine if the whale was exposed to harmful algal blooms or other illnesses. Lead veterinarian Kathy Burek-Huntington from Alaska Veterinary Pathology Services reports that the animal did not appear emaciated, but that blubber samples will be analyzed for more information on nutritional status.

Along with the U.S. Coast Guard, Sonia Kumar from Alaska Veterinary Pathology Services, and Karen Swatzbart with the Alaska Department of Fish and Game assisted with the partial necropsy.

“We are thankful for our strong partnerships,” said Alaska Regional Assistant Stranding Coordinator Sadie Wright. “The Coast Guard air crew kept an eye out for this animal and got our team out there asap after locating it."