Multispecies and Ecosystem Modeling for the Northeast Shelf Ecosystem

We use models to address a range of research and management needs. Some models generate short-term projections to support management advice. Other models simulate long-term evaluation of management strategies.

What Is a Model?

A model is a simple representation of an object or system. Models are used to develop a common understanding of the object or system, and to predict possible outcomes of different changes to the system. At the Northeast Fisheries Science Center, we use mathematical models for research and for management advice. The models vary in complexity, from simple equations to model primary productivity to single species assessment models to models with multiple species to complete ecosystems. 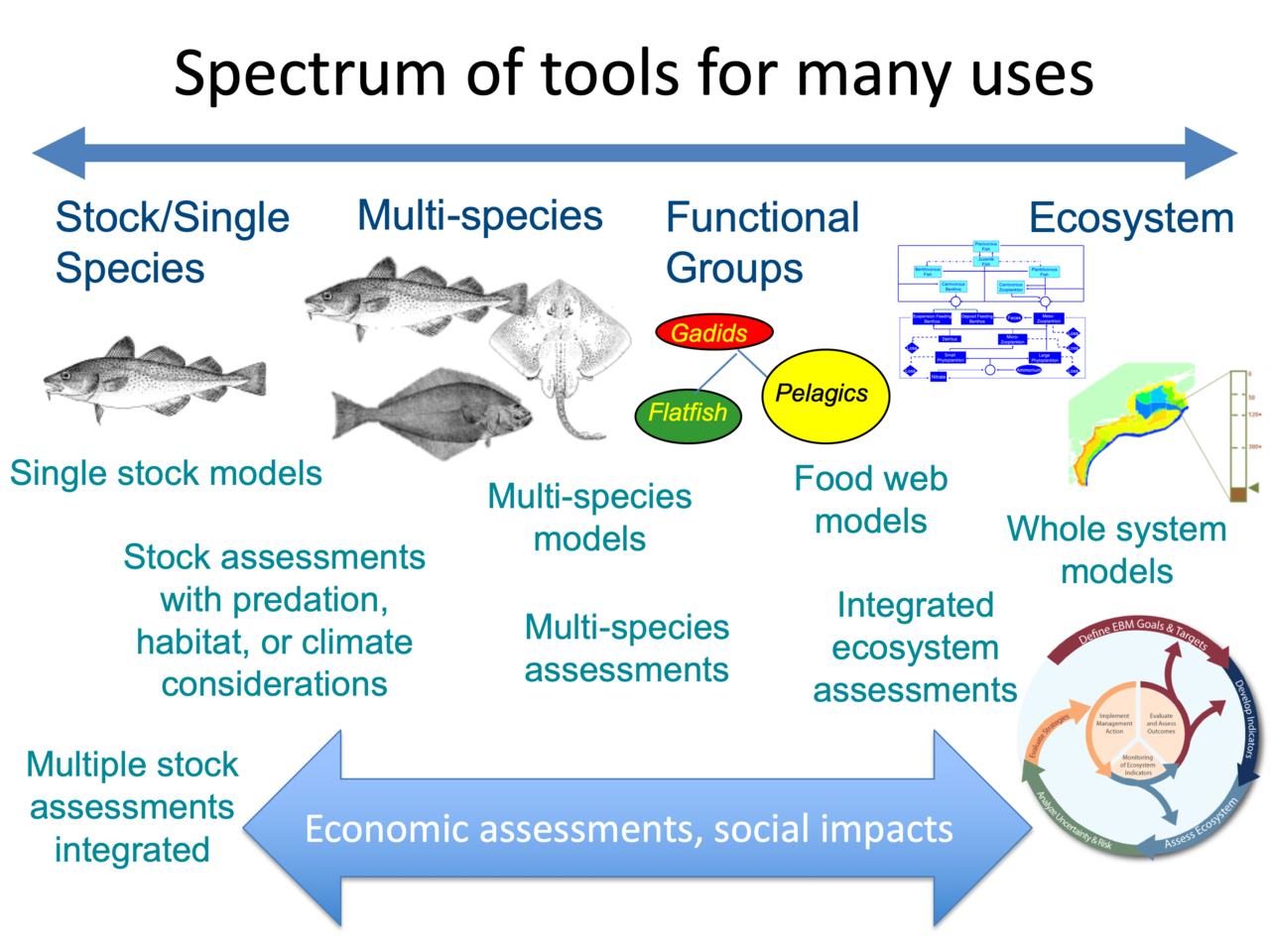 Different types of mathematical models are appropriate for different assessments and advice.  We maintain a spectrum of models to address a range of scientific research questions and for management advice.

Most current fisheries management is based on short-term projections from models of the population dynamics of a single species. We are developing a range of multispecies models that could be used for projecting options for sustainable harvest. These models can also be used in complicated situations where predators and prey are both fished, or where many species of fish are caught together.

Models can be used to experiment with different fishery management measures by testing them on a computer before applying them in the real world. Multispecies and ecosystem models are useful for:

Right Tool for the Job

There are many questions about the best way to manage human activities within a complex and changing ecosystem. It is important to have a range of models capable of addressing these questions. Models built to mimic the behavior of one component of the system may lack the ability to predict other important components of interest to managers. For this reason, it is also important to understand the questions managers have when developing and using multispecies and ecosystem models. Using several different models together to address a question can provide the most insight. When different models agree on an outcome, managers have more confidence in the prediction. This “ensemble” approach is currently used by hurricane forecasters in the United States. Our scientists are working towards this goal.

The first step in developing a mathematical model is to outline key processes and relationships. A conceptual model depicts these relationships. It can be used in various ways:

Scientists have developed conceptual models for the social-ecological systems of Georges Bank, the Gulf of Maine, and the Mid-Atlantic regions of the Northeastern United States. Our scientists have collaborated on conceptual model development for the Grand Banks in Canada, the North Sea in Europe, and for the summer flounder fishery in the Mid-Atlantic. While we use all of these models as communication tools, several have also been used to specify further quantitative analysis. 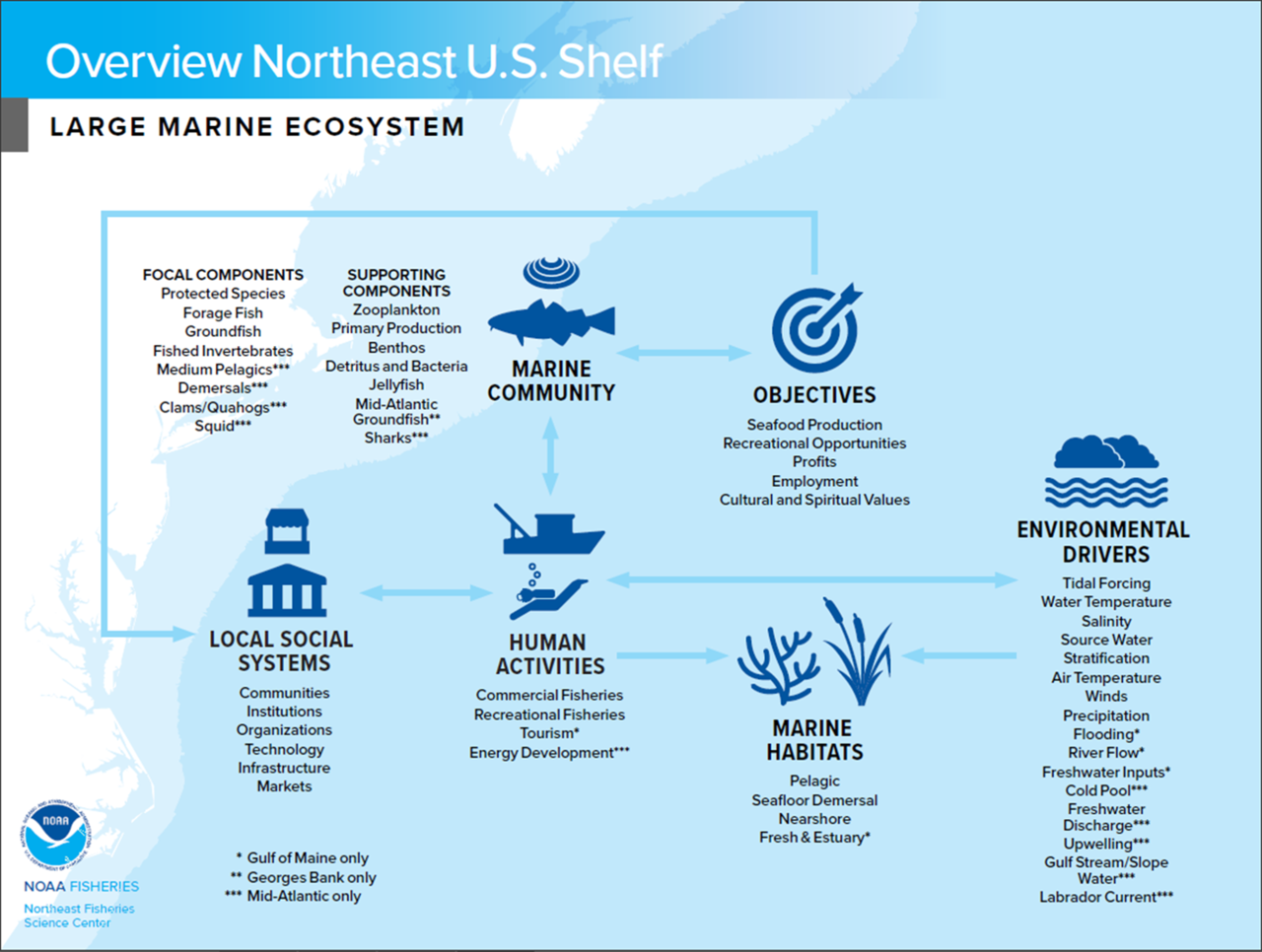 Production models track the changes in a species’ population biomass due to fishing, human interactions, and natural causes of death. These models can easily incorporate environmental changes over time, such as temperature, which can influence animal growth and reproduction. Multispecies production models also include interactions between species, such as competition and predation. This makes them a more complete description of an ecosystem if species are interacting.

Production models are much easier to create than more complicated models used in stock assessments, as the data required are usually easier to collect. They don’t include some of the data used in stock assessment models, such as information on the numbers of fish of different ages in the population. Multispecies models require information on diet and possible overlaps of habitat. We also have visualization software that can be used to observe changes in population sizes over time if we adjust fishing on different species. 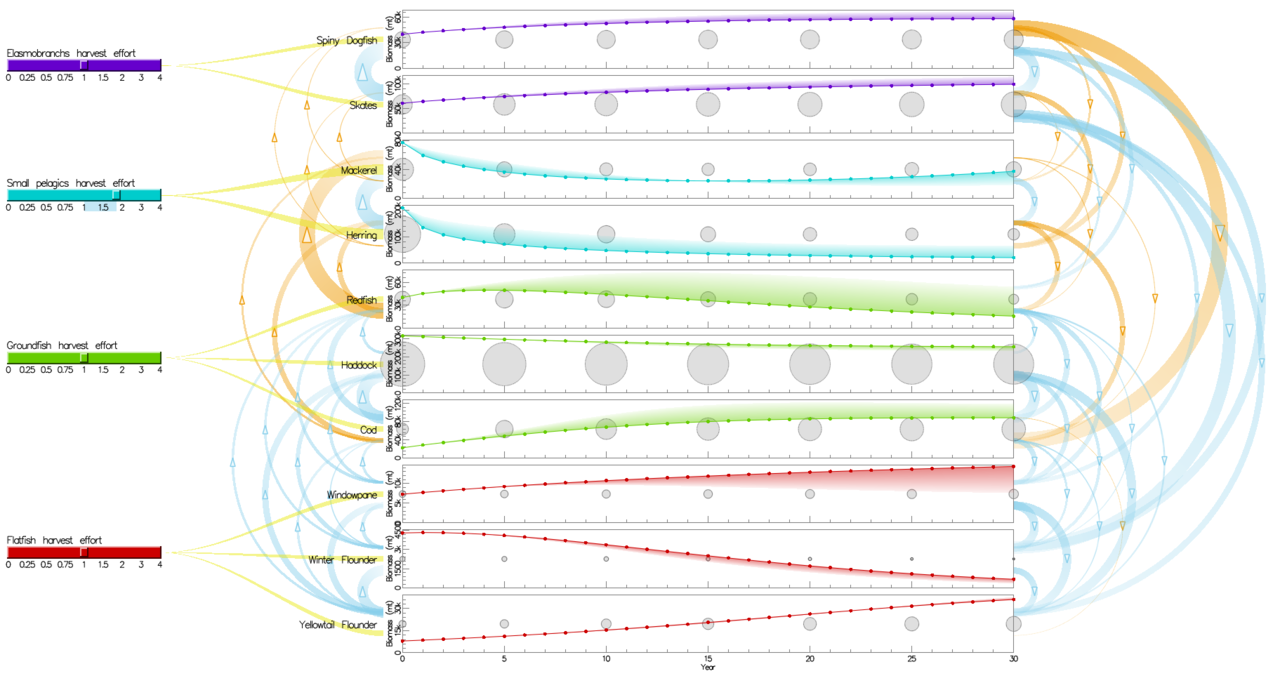 Visualization software developed in coordination with UNH to show the effects on a multispecies production model of increasing or decreasing fishing on different species in the model. Interactions between species, such as predation or competition, will cause changes in fishing to ripple through to other species even if they aren't directly affected by fishing. In this figure, fishing is increased on herring and mackerel. Because they are important food for other species in the model, the predator  species also decrease in population size over time.

Age- or size-structured population dynamics models track the changes in total numbers of animals by accounting for births, growth, and deaths for each age or size group. Many current fishery stock assessment models track populations by age group. Our scientists have developed both age- and size-structured multispecies models, which extend the single species models by adding information on predation. We continue to evaluate the capabilities of these multispecies models for short term projections and providing annual harvest advice to fisheries managers. 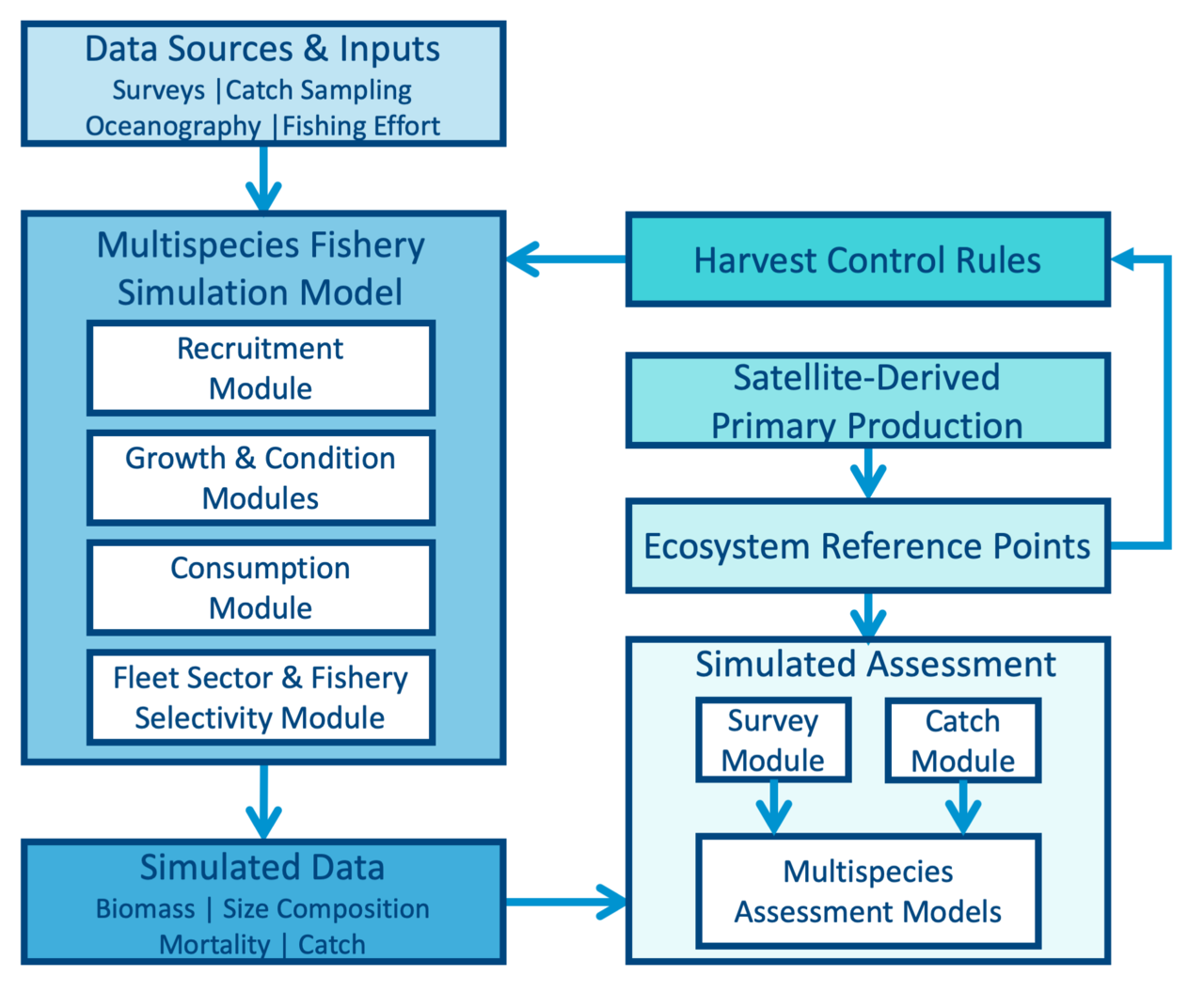 Models for testing management strategies simulate the entire management process from data collection through analysis and decision-making, implementing the decisions back into the modeled virtual world. Performance of different strategies can then be comp

Food web models track energy flow in an ecosystem from primary producers (phytoplankton) up to zooplankton, fish, top predators, and fisheries. They simultaneously account for deaths due to predation and fishing. These models may factor in information including:

Food web models are useful for management strategy evaluation that addresses fishery and predator-prey interactions. We have developed food web models for the Gulf of Maine, Georges Bank, Southern New England, and the Mid-Atlantic. Recently, we used an updated Gulf of Maine model to evaluate the potential impacts of changes in Atlantic herring fishery regulations, along with more detailed species models.

The Northeast and Alaska Fisheries Science Centers have collaborated to develop a flexible new food web modeling tool called Rpath. Rpath has the capability to run many food web management strategy simulations efficiently, and is being used by researchers around the world. 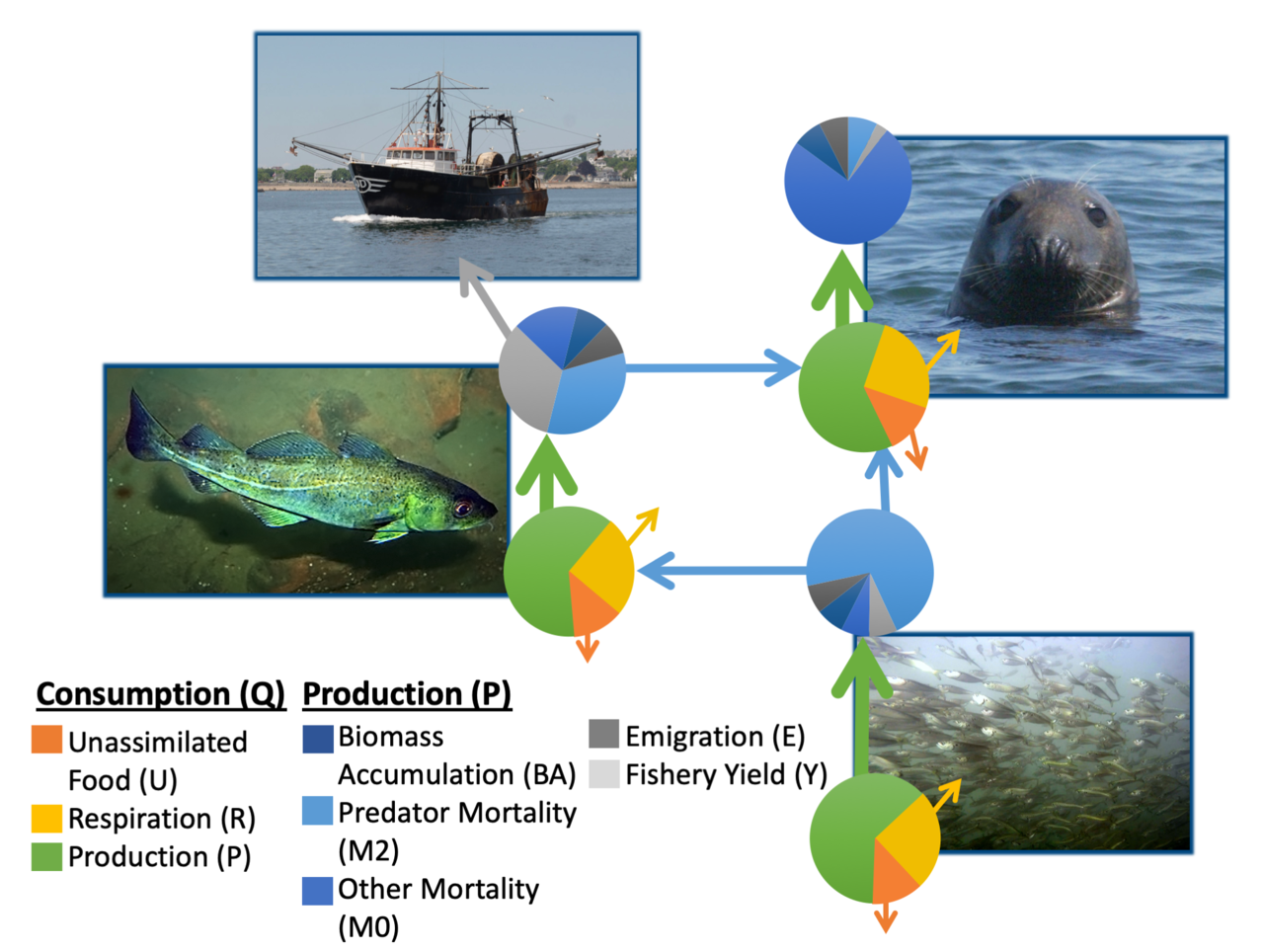 A simplified food web example tracing energy flow.  The pie charts show how each species must consume enough food to sustain the amount of predation and other removals (such as fishing) as well as the amount of energy they lose due to respiration and unassimilated food via excretion.

Climate models are important tools for improving our understanding and predictability of climate behavior on seasonal, annual, decadal, and centennial time scales. Models investigate how much of the observed climate changes may be due to natural variability, human activity, or a combination of both. Their results and projections provide essential information to better inform decisions of national, regional, and local importance, such as water resource management, agriculture, transportation, and urban planning. Learn how how our scientists incorporate climate modeling results into regional studies.

End to end models such as Atlantis simulate everything from physical oceanography through primary production, zooplankton, invertebrates, fish, fisheries, and human activities.

“End-to-end” models trace processes from incoming sunlight through physical oceanography, biogeochemistry, phytoplankton, zooplankton, fish, protected species, and fisheries. These are the most complicated simulation models used in fisheries management strategy evaluation at present. One type of end-to-end model, Atlantis, is a spatial fisheries ecosystem model. It was developed by the Commonwealth Scientific and Industrial Research Organisation (CSIRO) in Australia.

In collaboration with CSIRO, our scientists developed an Atlantis model for the Northeast U.S. shelf ecosystem. We tested its performance by comparing its predictions with data collected after the model was constructed. Work is ongoing to update the Northeast U.S. Atlantis model for use in generating datasets for testing simpler assessment models and for fishery management strategy evaluation under climate change.