NOAA’s Long History of Water Column Sampling in the Northeast

What started as ocean exploration in 1912 is now a broadly focused, long-term program. We supply critical information to climate research and predictions, fisheries and protected species management, and basic science. 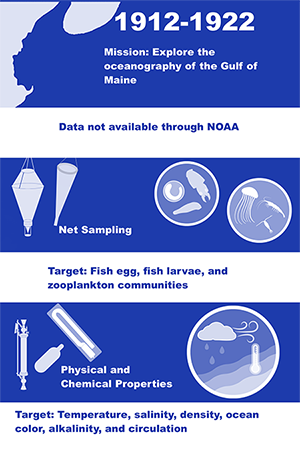 Picture yourself studying the Gulf of Maine in 1912: no computers, no GPS. Fishing and research vessels were generally made of wood and powered by sails. Despite being home to some of the oldest fisheries in the country, many aspects of the Gulf of Maine were largely unknown. Supported by the U.S. Bureau of Fisheries and the Harvard Museum of Comparative Zoology,  Henry B. Bigelow and colleagues set out to learn more. On July 9, 1912, they left Gloucester, Massachusetts on a large, wooden, two-masted schooner, the Grampus. Thus began a long history of plankton and oceanographic sampling on the northeast U.S. continental shelf that continues today.

Early collections were largely exploratory and described the entire plankton community and oceanography of the Gulf of Maine. Much of the focus was on measuring water properties like temperature and salinity, and on counting zooplankton. Researchers described fish egg and larval distributions, and related these factors to adult spawning locations. These early exploratory surveys serve as the foundation of much of the research being conducted today. 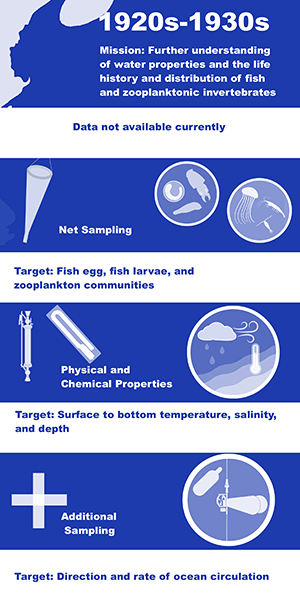 Surveys in the 1920s and 1930s included multiple cruises per year to track hydrography and early-life stages of several commercially important species including:

Sampling during this period was targeted to specific areas or questions. It provided much of the early work on the horizontal, vertical, and seasonal distributions of fish eggs and larvae, zooplankton abundance, nutrients composition, and ocean flow.

These surveys also mark the early careers of some of the big names of oceanographic research of this period. Oscar Sette studied the recruitment and year-to-year variability of Atlantic mackerel and is credited as an early developer of ecosystem and fisheries oceanography.

Charles and Marie Fish focused on marine plankton and early investigations on the life history of Atlantic cod. They later established what is now the Graduate School of Oceanography at the University of Rhode Island.

Lionel Walford started his career studying the survival of the early life history of haddock. He later served as the first director of the James J. Howard lab in Sandy Hook, NJ.

Collections were put on hold during the late-1930s and 1940s for a number of reasons: 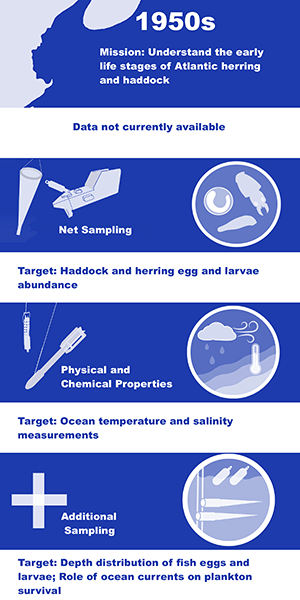 Fortunately for science, a government reorganization transferred the Woods Hole lab to the newly-formed Bureau of Commercial Fisheries in 1956. The United States also joined the International Commission for the Northwest Atlantic Fisheries in 1950. With these important changes, we resumed hydrographic and plankton research.

Research cruises in the Gulf of Maine and Georges Bank targeted the egg and larval stages of haddock during the spring and Atlantic herring during the fall and winter. Scientists compared the larval diets of Atlantic cod, haddock, and pollock to the zooplankton collected at the same time. They continued to measure temperature, salinity, and nutrients, and described the major flow patterns of the Gulf of Maine in great detail.

We also began to identify non-target species collected in samples, expanding the knowledge of fish species within the ecosystem. 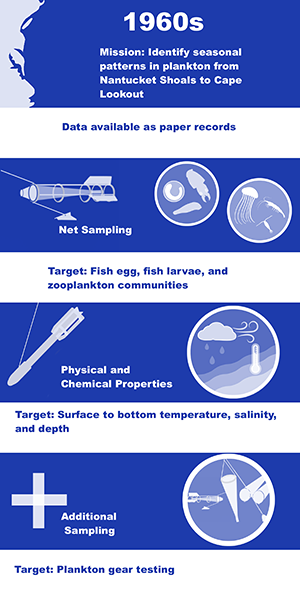 Research on ichthyoplankton (the eggs and larvae of fish) conducted by the Bureau of Commercial Fisheries in the 1960s was marked by regional expansion and standardization. A 13-month shelf-wide program (1965-1966) on the R/V Dolphin completed cross-shelf transects from Nantucket Shoals, Massachusetts, to Cape Lookout, North Carolina. Researchers attempted to identify larvae of approximately 10 families to genus or species level and all others to family. This sampling resulted in a significant number of classic papers on the distribution, abundance, and seasonal patterns for many species on the northeast shelf.

By the 1970s, researchers had established modern ichthyoplankton research in the northeast. Regional sampling programs were conducted in the New York Bight off Long Island. Plankton were collected on bottom trawl surveys that operated from North Carolina to Nova Scotia, Canada. These programs set the stage for today’s long-term monitoring programs.

Since 1971, five successive surveys in the region have used standardized plankton sampling gears and techniques. Together, this collection of hydrographic measurements and plankton on the northeast shelf build an accessible data set spanning much of the past 50 years: 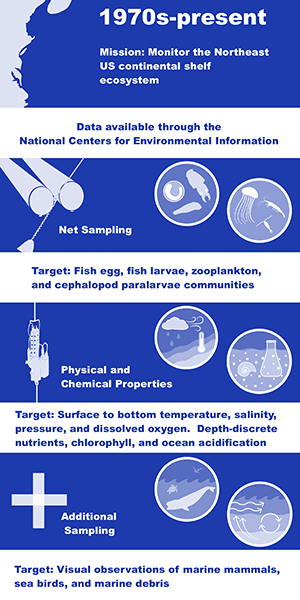 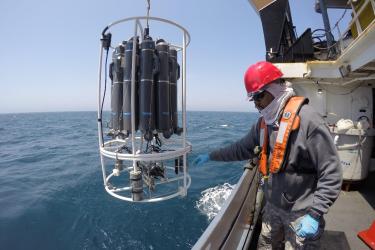 Since 1912, some of the ways we collect data have changed, but measurements of plankton abundance, water temperature, and water salinity have been collected for much of the last century.  However, despite everything we’ve learned, or maybe because of it, the northeast U.S. continental shelf still provides opportunities for exploration and wonder.