NOAA scientists work with partners to rehabilitate endangered Hawaiian monk seals in an effort to recover the species.

On the Line |
Pacific Islands 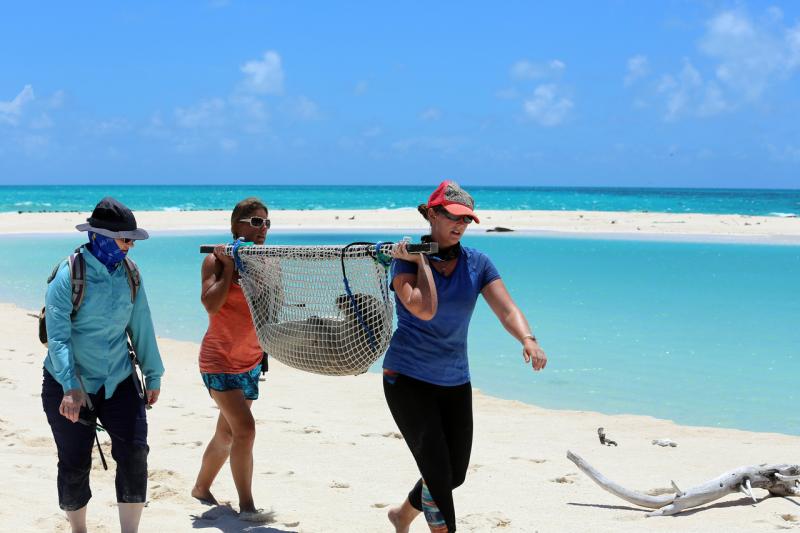 Hawaiian monk seals are the only seal species found in the Hawaiian Islands. They are also one of the most endangered seals in the world.

Watch this video to learn more about NOAA's efforts to recover the Hawaiian monk seal:

Today, there are an estimated 1,400 Hawaiian monk seals left in the wild, but those numbers must roughly triple before NOAA can remove them from the Endangered Species list.

The majority of the Hawaiian monk seal population lives on the remote Northwestern Hawaiian Islands, but they are also found in smaller numbers on the Main Hawaiian Islands. Monk seals face many threats including food limitation, shark predation, entanglement, fishery interactions, male seal aggression, loss of habitat, and disease.

Fortunately, there are many dedicated groups working to protect and recover this iconic species. NOAA Fisheries regularly partners with the Marine Mammal Center’s Ke Kai Ola Hospital to conduct intensive rehabilitation efforts that have helped many monk seals. And every year, field scientists travel to the Northwestern Hawaiian Islands to monitor the health of the seal populations and provide life-saving interventions and vaccinations.

The work being done by the Hawaiian Monk Seal Research Program has slowed the decline of monk seal populations and has shed new light on their behavior and life history. Monk seals are recolonizing the main Hawaiian Islands, increasing the subpopulation there to approximately 300 individuals over the past two decades. The total species population grew by three percent each year between 2014 and 2016 thanks in part to promising advances in juvenile seal survival enhancement research. We’ve also sequenced the Hawaiian monk seal genome, providing new insights that could help us better understand population dynamics, diet, and overall health.

There’s still much work to be done, but our scientists are learning more each year and momentum seems to be swinging in a positive direction for these endangered seals. Learn how you can help Hawaiian monk seals. Thanks for tuning in. Mahalo!

Check out this video of field scientists tagging a Hawaiian monk seal at Kure Atoll. Tail tags help our scientists identify and track each individual seal throughout the field season. Some seals are also fitted with GPS tags and camera equipment to monitor their movement and foraging habits.