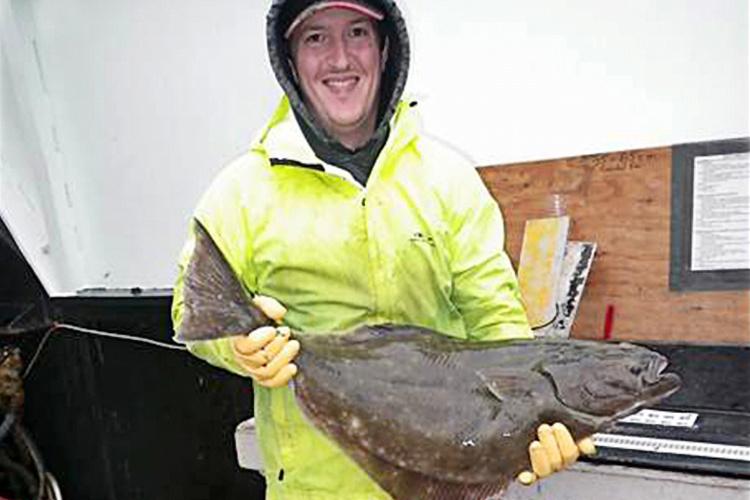 Doing It for the Halibut

Apologies for shamelessly using the worn-out-cliché-pun-attention-getter “Halibut/#*&&-of-it”. Fact is, we really DO do “It” for Pacific halibut, but we (NOAA Fisheries) are really only a very small part of “It” because halibut is an extra special fish.

So what do I mean by “It” and why is Pacific halibut so extra special? Doing “It” simply refers to monitoring the halibut in the North Pacific Ocean like the U.S. Census Bureau monitors the human citizens in the United States. There’s a little more to “It” than that, so I’ll get back to “It” in a bit. But first, why are Pacific halibut so extra special?

In case you don’t already know, here are some good reasons why halibut are so special. Do a quick poll with your family and friends and ask them what their favorite white fish is to eat, or ask someone whose gone fishing in Alaska about their most prized trophy fish. Pardon me for excluding salmon as a trophy fish, but it’s an orange-fleshed fish from a more bourgeois class in the upper water column. Pacific halibut are less discriminant and lowly bottom dwellers but certainly have excellent taste in cuisine. They’ll eat crabs and shrimp off the bottom for appetizers and make jaunts into the water column to eat those higher-up fish for the main course.

Unfortunately for halibut, they are highly esteemed to us humans. Walk into just about any seafood market and you’ll see halibut steaks, filets or both. Most haute in seafood restaurants these days are the cheeks, considered the “beef tenderloin” cut of the halibut while for casual dinners common fare in just about any northwest gastro pub is the beer-batter deep-fried halibut fish n’ chips.

Good thing halibut are big so there’s enough to go around. Pacific halibut are the largest flatfish, and if you make no bones about it by excluding Sharknado-type fish, halibut are the largest fish in the North Pacific Ocean. That’s because skeletons of huge fish like the basking shark are not made of bone, they are made entirely of cartilage, that flimsy stuff that allows your protruding appendages like ears and nose to bend instead of break. We’ve all heard the fish stories about the 8 foot 500 pound halibut that some guy caught on “ten-pound” test fishing line, and once he landed it on the deck of his wooden skiff, it flipped and flopped so hard that it punched a hole in the bottom and sunk the boat. With all that bulk and muscle, halibut are strong swimmers that are known to take occasional road trips traveling more than 1000 miles anywhere along the North American coast with occasional trips abroad to Russia and Japan, although no one really knows why for sure. Like me, maybe it’s trips to get more sun or some different cuisine.

These are among the things that make the Pacific halibut so extra special. Well, I guess sinking boats isn’t so good. Good thing skiffs are mostly made of aluminum and fiberglass nowadays.

Getting back to doing “It” for the halibut

The primary responsibility for doing “It” falls upon a namesake organization formed by a treaty between the U.S. and Canada in 1923 called the International Pacific Halibut Commission (IPHC). Halibut, the fish, knows no borders and is found in the marine waters of the contiguous west coast United States and Canada. HENCE, the IPHC was formed by an agreement between the two countries to monitor and preserve healthy Pacific halibut populations and represent interests of fishing citizens from all parts so that everyone gets a voice. The IPHC’s Setline Survey covers the entire North American coast including all the coasts of Alaska, British Columbia, Washington, Oregon and California. That’s a huge endeavor and you can see why the IPHC survey is the primary survey for doing ”It” for halibut. Pacific halibut are all over the place and are hard to keep track of. That’s why the IPHC survey uses set lines with baited hooks to survey the elusive halibut. Remember, halibut have good palettes so the bait IPHC uses to catch them must be gourmet. 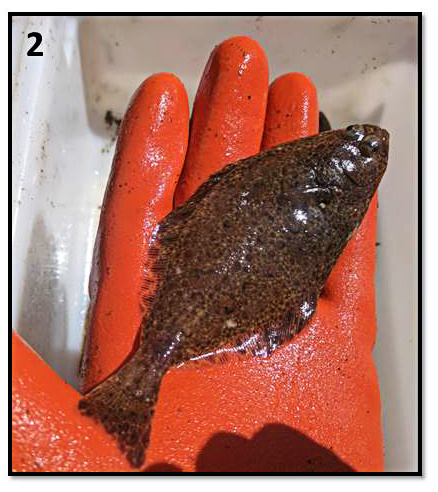 A juvenile Pacific halibut captured on the Bering Sea shelf during the 2017 bottom trawl survey.

So where does the Bering Sea survey come into the picture and how are we contributing to doing “It” for the halibut? Basically, we’re helping the IPHC monitor a part of the halibut population, one of the many halibut neighborhoods (habitat) along the North American coast. The Bering Sea shelf is broad and relatively shallow and then drops off steeply along the western edge down to bottom depths more than 1,000 feet. This drop off point is a major pick-up spot where adult Pacific halibut go to spawn. Fertilized eggs rise to the surface, hatch, and then these normal little fish undergo an incredibly amazing eyes-move-to-one-side-of-the-head transformation, then drift back onto the shelf where they can settle down, hang out and figure out what’s up and what’s down.

There’s a lot of food to eat on the shelf so little halibut can grow big and strong so they can maybe make a journey back to the drop-off/pick-up spot someday. Our research gear is perfect for sampling these smaller fish, the slow-poke halibuts, the ones that are less than about 2.5 feet in length. Every year, the IPHC sends out a scientist on our annual summer trawl survey so they can try to figure out if any of those future generations of halibut are going to amount to anything. This year that IPHC contractor/scientist who joined us on our survey was Chris Clarke from Victoria, B.C.. Normally, Chris would be one among a cadre of contracted scientists hired by the IPHC to do an annual check-up on the entire coast wide Pacific halibut population.

He’s on double-duty collecting information and doing special projects on halibut using tags to figure out where halibut go on road trips and why. The extra special halibut does not exempt him from helping us doing “It” for a whole variety of other Bering Sea fish and crab populations that NOAA Fisheries monitors for management purposes. Chris is pitching-in and doing his share and more. He’s is a model example of how cooperative research between agencies like the IPHC and NOAA Fisheries works. Thank you, Chris, and thank you IPHC!

“It” is a good partnership. 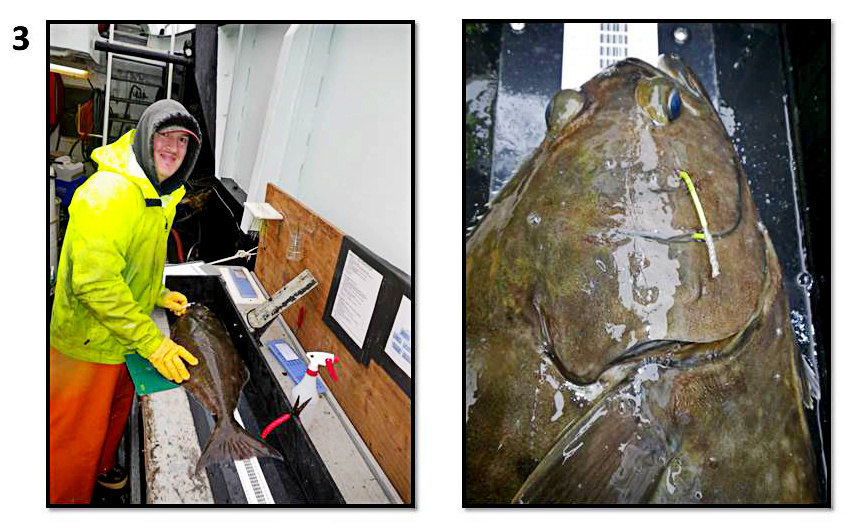 Chris Clarke tagging a Pacific halibut for a special project to study their migration patterns (left) and a close-up of the wire tag used on the halibut (right).