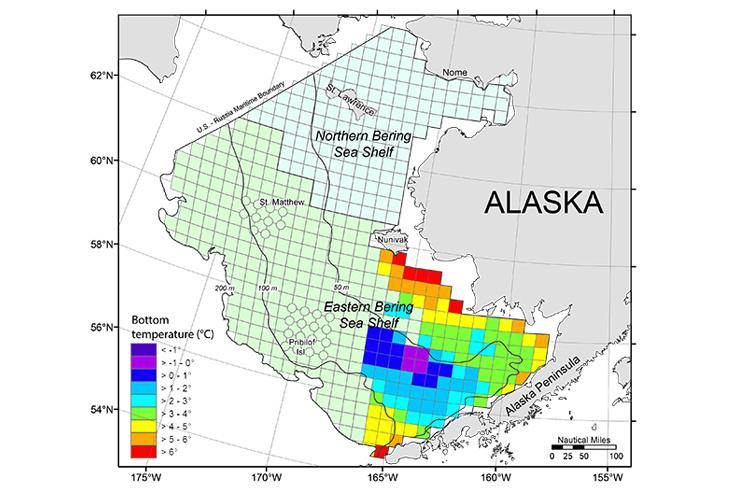 The map shows the sampling grid for the 2017 eastern and northern Bering Sea shelf bottom trawl survey (June 1 and August 30, 2017). The map will be updated serval times each week to show the progress of the survey vessels and the bottom temperature (℃) in each 20 x 20 nautical mile grid cell.

Both the Vesteraalen and Alaska Knight were back in Dutch Harbor for a couple of days after completing 96 stations during Leg 1 of the survey. Leg breaks are used to refuel, re-provision, and to make minor vessel repairs, as well as exchange scientific and vessel crew.

Thanks and congratulations to all who participated on Leg 1. Job well done!

The new scientific crew flew in to Dutch Harbor and made it on time. Getting there is always a roll of the dice. A low-lying fog can creep in during the summer when the sun-warmed ground mixes with cold Bering Sea air. Planes can’t see the runway with a low ceiling so flights often get cancelled. Dutch Harbor is also very busy because it is the epicenter of walleye pollock fishing, the largest single-species fishery in the world, and the port is at its busiest right now. It only takes a few flight cancellations to cause waiting lists and flight delays that can last for days. We were lucky this year because everyone (and their luggage) made it on schedule. Whew!

After reviewing data on female red king crabs from the first few weeks of the survey, it was apparent that one of the vessels will need to revisit about 20 stations in Bristol Bay (southeast Bering Sea) after the standard survey is completed. It’s about a 400 nautical mile trip to Bristol Bay from the last station in the standard survey.

So what’s the big deal and why is it so important? Colder-than-average bottom water temperatures this year (Cold Pool Encountered Early) delayed red king crab mating which means a high percentage of females had not yet molted and released new egg clutches (The Season for Hugging Crabs). Knowing how many females successfully mated is critical for managing the Bristol Bay red king crab fishery. Hopefully, waiting until the standard survey is complete will give the bottom water time to become warm enough for female red king crabs to molt and mate.

The 20 added stations bring the total remaining to 444. Still a ways to go! 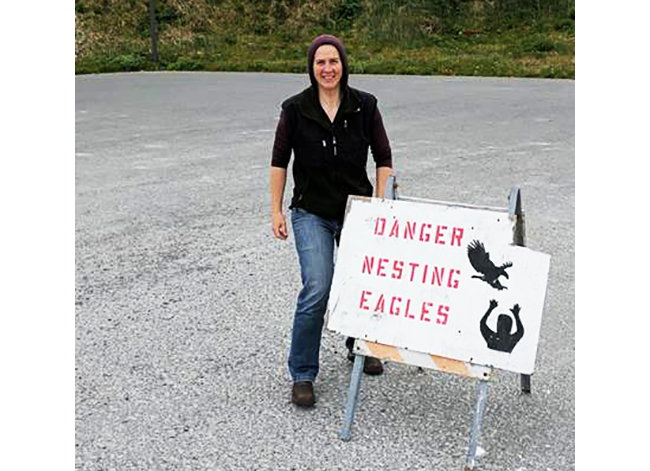 Elaina Jorgenson (AFSC), the new lead scientist for the Vesteraalen, making a stop at the post office after arriving in Dutch Harbor.