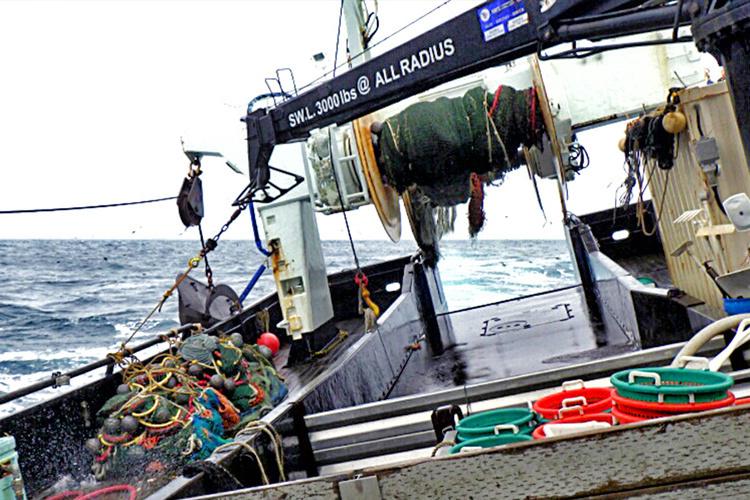 Earlier in the cruise, Bob mentioned finding the edge of the Bering Sea cold pool. When in the most frigid heart of the cold pool, we find species like the marbled eelpout (Lycodes raridens), which is generally distributed only in the northern half of the Bering Sea shelf extending up into the Arctic Ocean. The marbled eelpout is especially well adapted to these chilly waters because it is capable of producing a protein that acts like antifreeze in their blood, so that even when temperatures on the bottom of the Bering Sea shelf are subzero, they can remain active and lively.

Another interesting fish we encounter up north is the butterfly sculpin (Hemilepidotus papilio), one of the many species of fish in the Bering Sea that can vary drastically in its appearance depending on whether it is a male or a female. If mature adults of the two sexes vary in size or shape, the phenomenon is called sexual dimorphism (di – double or twofold, and morph – size, shape or form). If the difference between sexes is based on color, it can also be called sexual dichromatism (‘chrome’ – color). Obviously, the butterfly sculpin is both! The male butterfly sculpin has large and elaborate radiating fins and is quite festive in its coloration. The female is pretty too, but she has less extravagant fins with hues of red and bronze. These differences play an important role in the mating and reproduction of the butterfly sculpin. 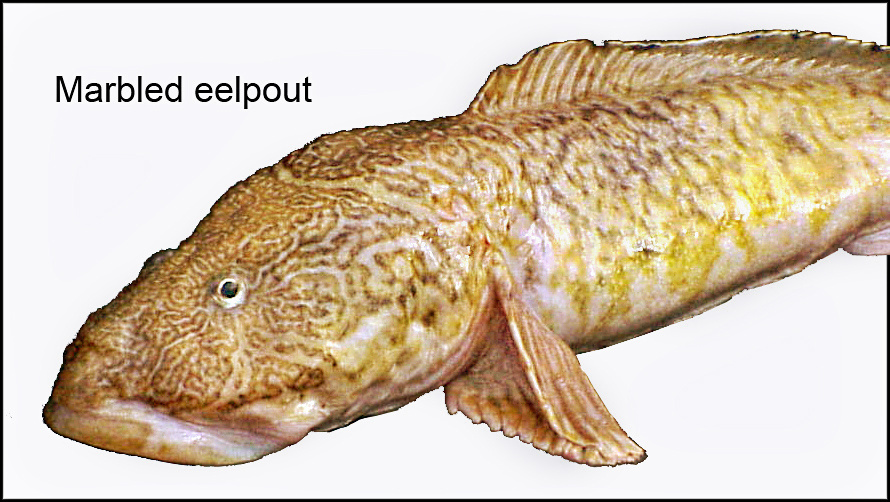 The marbled eelpout (Lycodes raridens) produces a protein in its body that acts as antifreeze. 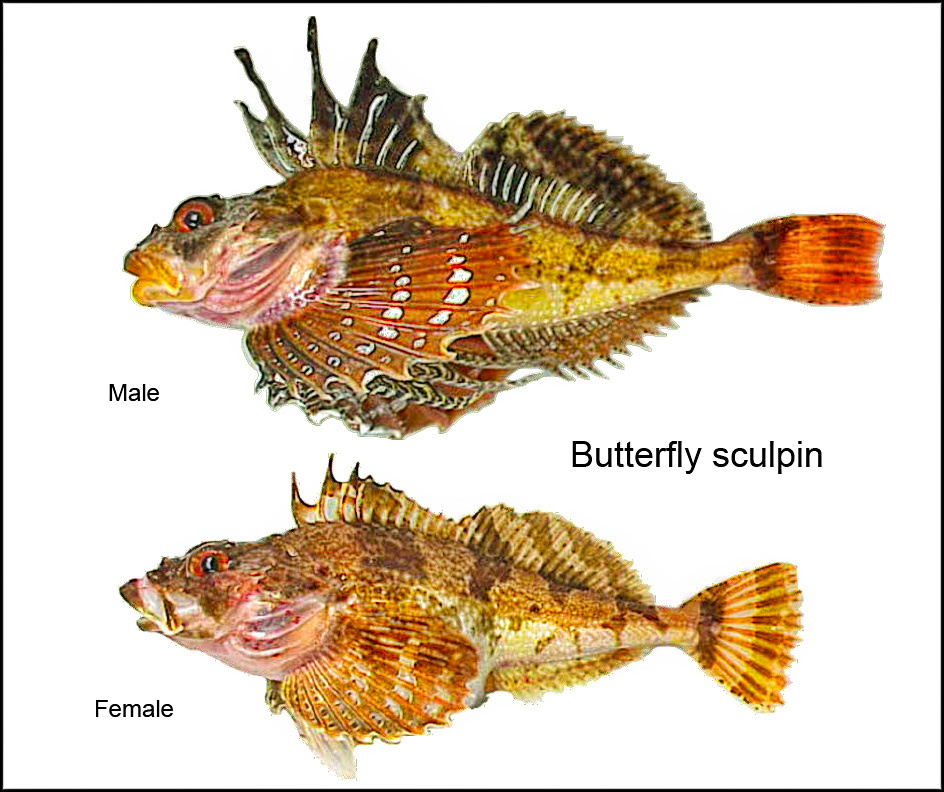 The butterfly sculpin (Hemilepidotus papilio) is one of many species of fish in the Bering Sea where males and females vary drastically in their appearance. 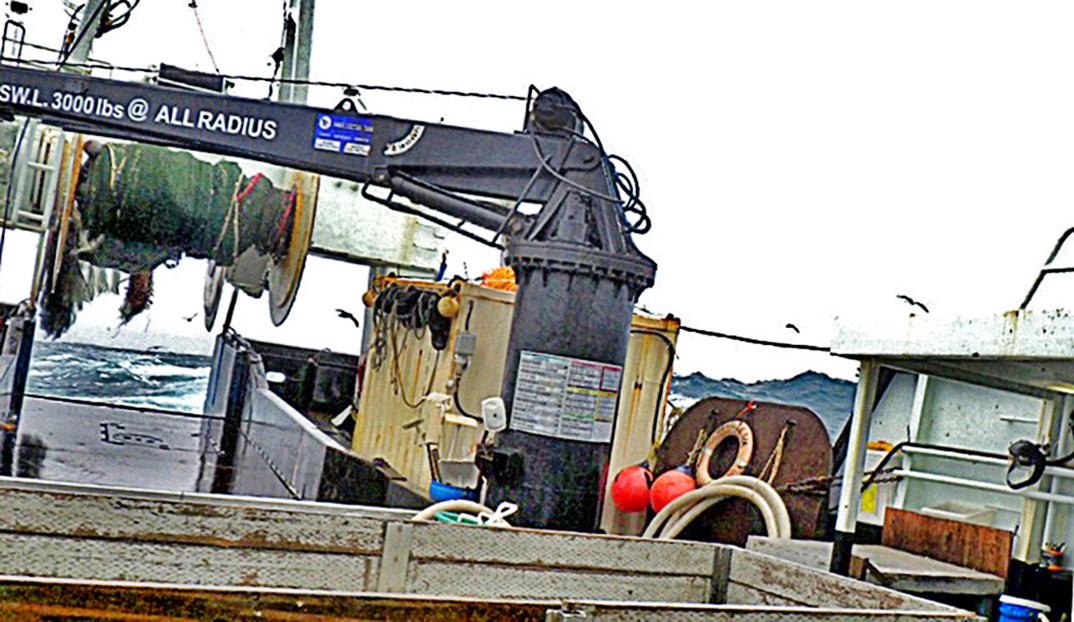 Earlier in this blog, Bob mentioned the preternaturally nice weather they encountered on Leg 1 of the survey. Those of us coming up for Leg 3 knew it couldn't last. From day one of this leg, we had some windy, rolly weather - nothing serious, just less comfortable. On our way out from Dutch Harbor, we discovered exactly what items weren’t tied down tightly! From picking up bowls of fruit from the galley floor, to keeping a cup of coffee upright, to putting a cod into a basket full of crab that wasn't there a moment ago, often the weather decides how we juggle our days.

On this leg, we used one of the unpleasant weather days to brush-up on safety awareness. The whole crew watched a training video series on safety-at-sea, and we paused to discuss personal experiences and share advice learned over the years on how to approach various scenarios such as fire, injuries, man overboard, and abandoning ship. To conclude, we staged a pretend drill where we had to react to a crew member who had fallen and injured their spine. We practiced the steps for how to respond to such an accident, bringing the appropriate medical equipment to the patient, recording vital signs, informing the captain, and preparing to do a helicopter evacuation of the patient from the vessel.

Over the years of conducting this survey on remote seas, we have learned that safety should be taught as a culture, not only as a response to an accident. Each one of us is responsible for our own safety as well as the safety of others on the ship. 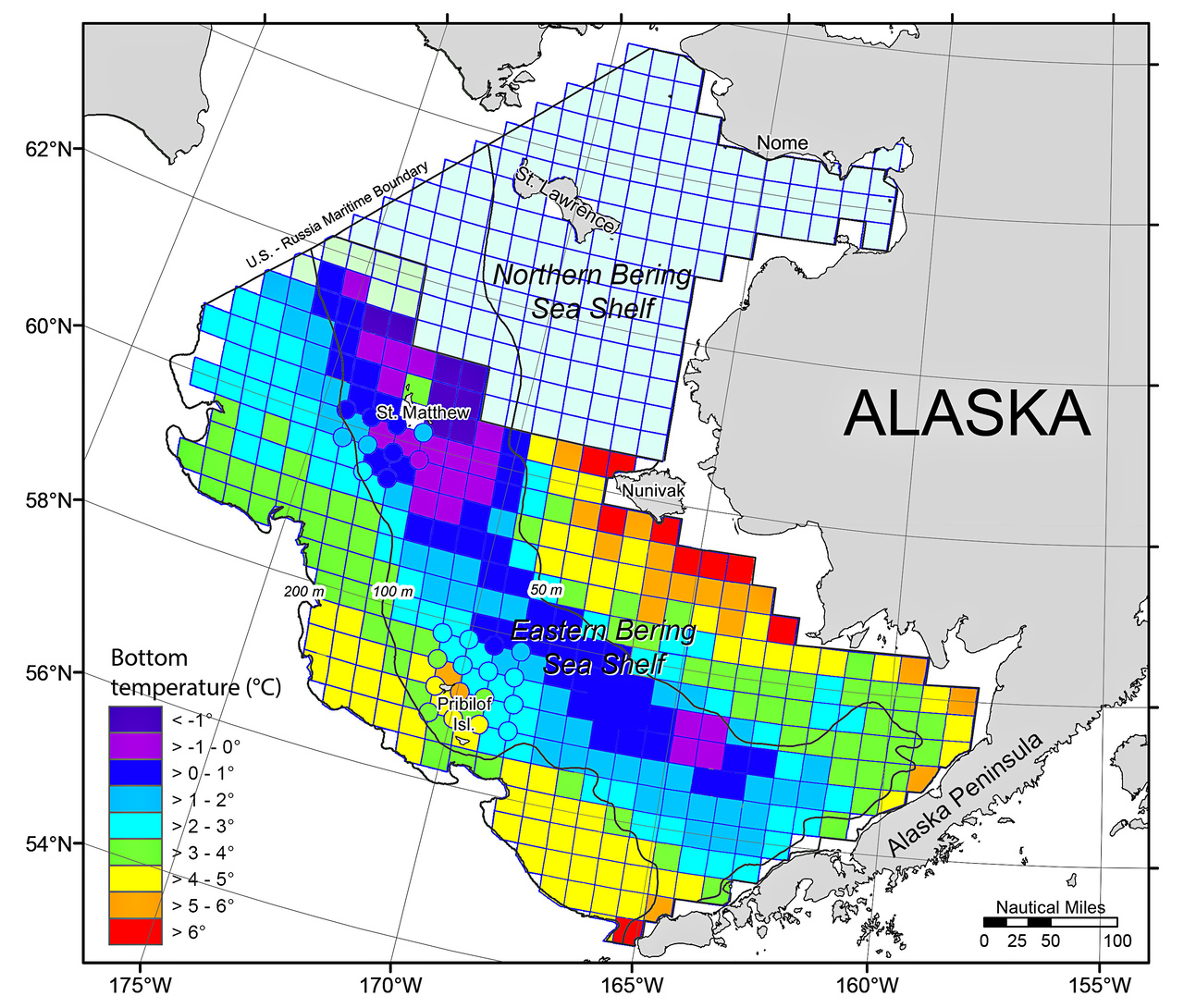 The map shows the sampling grid for the 2017 eastern and northern Bering Sea shelf bottom trawl survey (June 1 and August 30, 2017). The map will be updated several times each week to show the progress of the survey vessels and the bottom temperature (°C) in each 20x20 nautical mile grid cell. 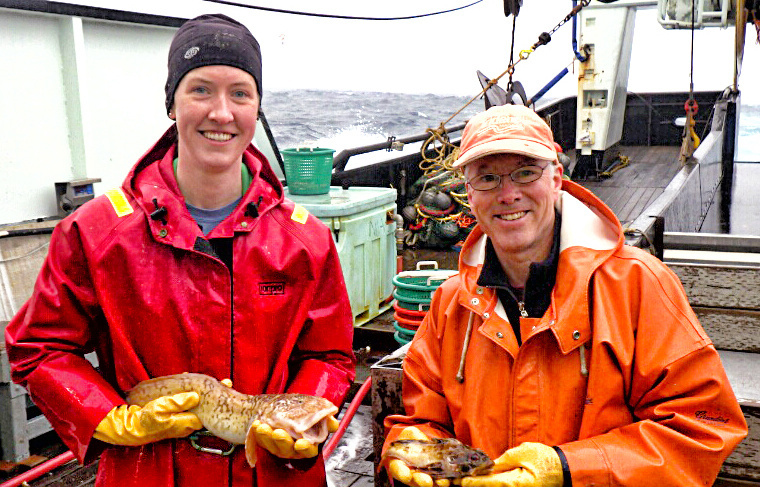 Caroline Robinson (Contractor) holds a marbled eelpout while Dan Nichol holds a male butterfly sculpin, both of which are commonly found in the northern waters of the Bering Sea shelf.