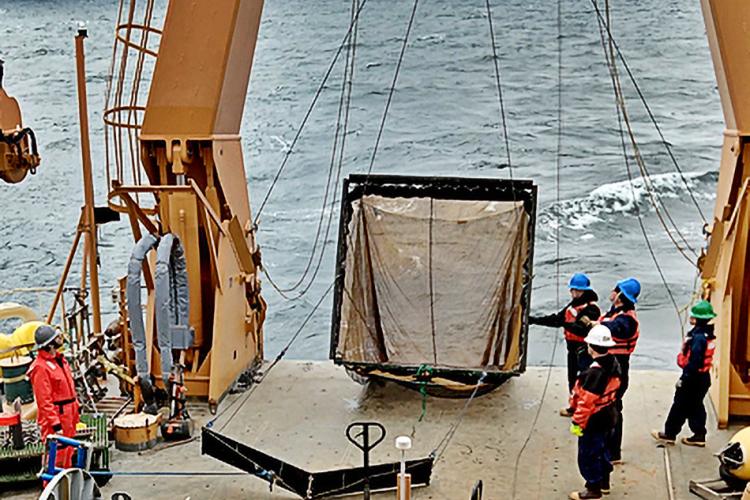 Age-0 Arctic cod caught in one of the tows. 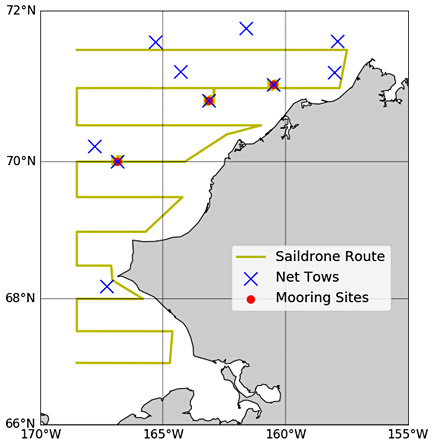 The route of the Chukchi Sea survey completed by both saildrones (yellow) and the locations of the net tows (blue X) conducted from the USCGC Healy. The net tows were conducted at stations that we were already planning to visit for other scientific sampling, including the location of the three echosounder moorings (red circles) that the saildrones are visiting multiple times

While the saildrones can easily conduct an acoustic survey over a large area, we need to know which species are causing the observed echoes to make biologically meaningful interpretations of the data. On NOAA fisheries surveys, we trawl for samples as the acoustic survey is being conducted. Since a saildrone can’t catch fish, I went to sea to collect samples in the same area the saildrones are surveying.

The largest ice breaker and largest vessel overall in the coast guard fleet at 420 feet long, the USCGC Healy is used for both Coast Guard detail and science missions, focused in the US Arctic. This summer, as one of the 40 scientists onboard the shop for the Healy 1801 mission to the Chukchi and Beaufort Seas, I collected samples of fish throughout the saildrone survey area.

To capture fish, we used a net called a Methot Frame Trawl, which has a square metal frame, about 2.2 meters across for an opening. The net catches most species larger than 2 millimeters but small enough that they are not able to swim out of the way to avoid being caught, such as zooplankton and small fish.

In the Chukchi Sea, we are interested in the distribution of the two most abundant type of cod, Arctic cod and Saffron cod. In the net samples, we mostly found Arctic cod in the northern survey region and further away from Alaska coast. We also found that the Arctic cod caught were smaller than in previous surveys.  It is possible that because of where we sampled, we missed areas of high concentrations of larger fish. We also may have missed the larger fish due to their ability to swim away from the net.