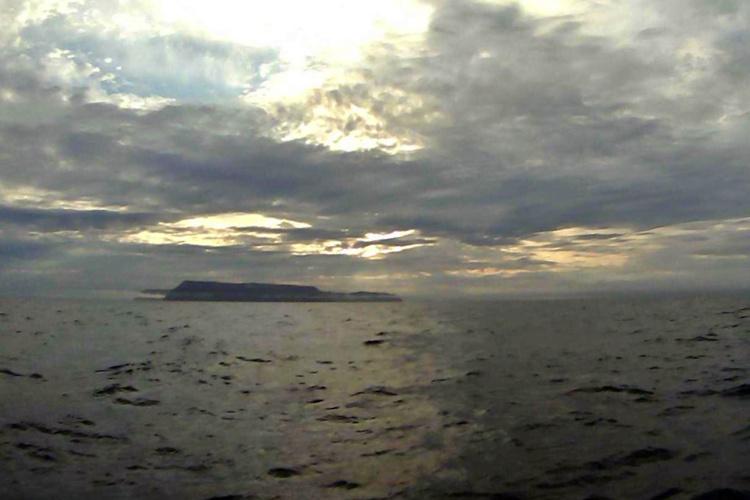 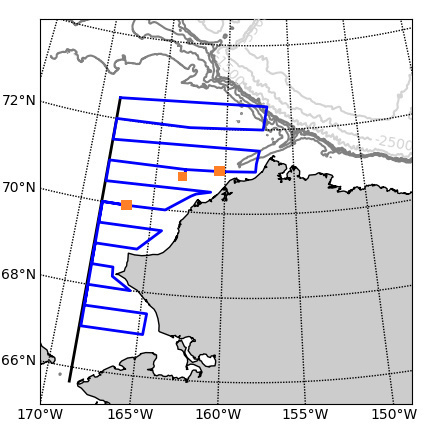 The trackline of the Chukchi Sea survey planned for the first saildrone (blue lines).  During the survey, the saildrone will also stop to spend some extra time conducting “mini-surveys” at the location of three mooring (orange squares) that were deployed last summer.

After two weeks and over 800 nautical miles, both saildrones are now through the Bering Strait and into the Chukchi Sea.  The saildrone’s ability to travel to remote locations under their own power is a real plus for working in remote areas.  This is only the beginning. Combined, the saildrones have over 7,000 nautical miles to go.  In a few more days, the two saildrones will part ways and get to work.

As we’ve mentioned, the main goal of the mission is to repeat a survey of the Chukchi Sea that we have conducted with ships in recent years, and lucky for us, with the saildrones, we’re hoping to do it twice.  The first saildrone will begin surveying the U.S. Chukchi Sea shelf right away, in the area where previous surveys have observed high abundances of juvenile Arctic cod.  This saildrone will make its way to the northwest corner of the survey region at 72.5 °N, where it will make its way back towards Bering Strait.

The second saildrone will also complete a survey of the Chukchi Sea, but we’re planning to have it spend about a month working in other areas first.  This week, it will turn right and say farewell to its sailing mate after passing Cape Lisburne at 70 degrees north.  From there, it will conduct a series of “mini-surveys” at the site of three moorings we deployed last summer. Then, depending on the amount of sea ice in the area, the saildrone will collect data in deep water (100-1500 m ) along the shelf break of the Beaufort and Chukchi Seas before it is sent to start the same Chukchi Sea survey lines as the other saildrone.

The trackline planned for the second saildrone.  It will start (left image) by surveying the three moorings we deployed last summer (orange squares). Depending on the condition and location of the sea ice as it continues to melt this summer, the saildrone will then head to the Beaufort Sea (center image, blue lines) to survey along the shelf break. Finally, it will finish off its mission by completing the second pass of our Chukchi Sea survey area (right image, blue lines).

At the shelf break, the seafloor begins to slope down towards the basin of the deep Arctic Ocean, and past surveys have seen populations of older Arctic cod in deeper water.  We are hoping to learn more about how these adult fish are distributed, and how they might be related to the large numbers of young fish we observe in the shallow waters of the Chukchi Sea.  At this point, much of the far-north waters we hope to survey are still ice-covered and inaccessible to the saildrones, and we will have to be patient and follow the seasonal retreat of the sea ice. 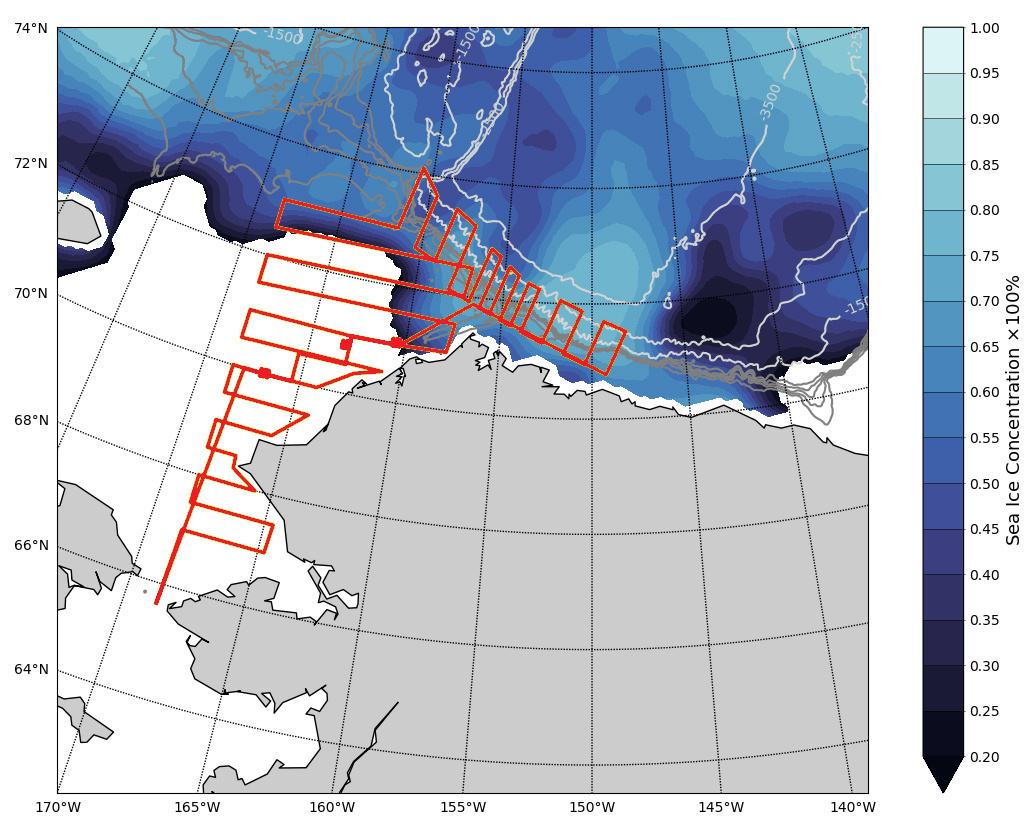 A map of the complete planned route for one saildrone (red lines) showing the extent and concentration of sea ice.  Currently, the entire Beaufort Sea region of the route is still ice-covered (sea ice data courtesy of EUMESTAT OSI SAF).