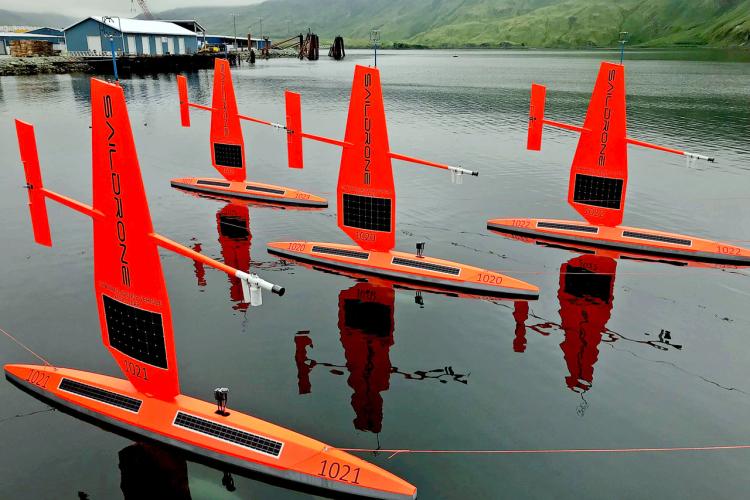 The end of June, four Saildrones left Dutch Harbor, AK and headed north. These ocean-going robots have started to carry out a 700-nautical-mile trip to Bering Strait, where they will enter the Chukchi Sea and begin their work in the Chukchi and Beaufort Seas, and the Arctic Ocean. NOAA Fisheries scientists at the Alaska Fisheries Science Center are using two of these Saildrones to measure the abundance of Arctic cod in Alaska. The other two are being used by NOAA Research’s Pacific Marine Environmental Laboratory to observe how the Arctic Ocean is absorbing carbon dioxide from the atmosphere.

How the Saildrone Works 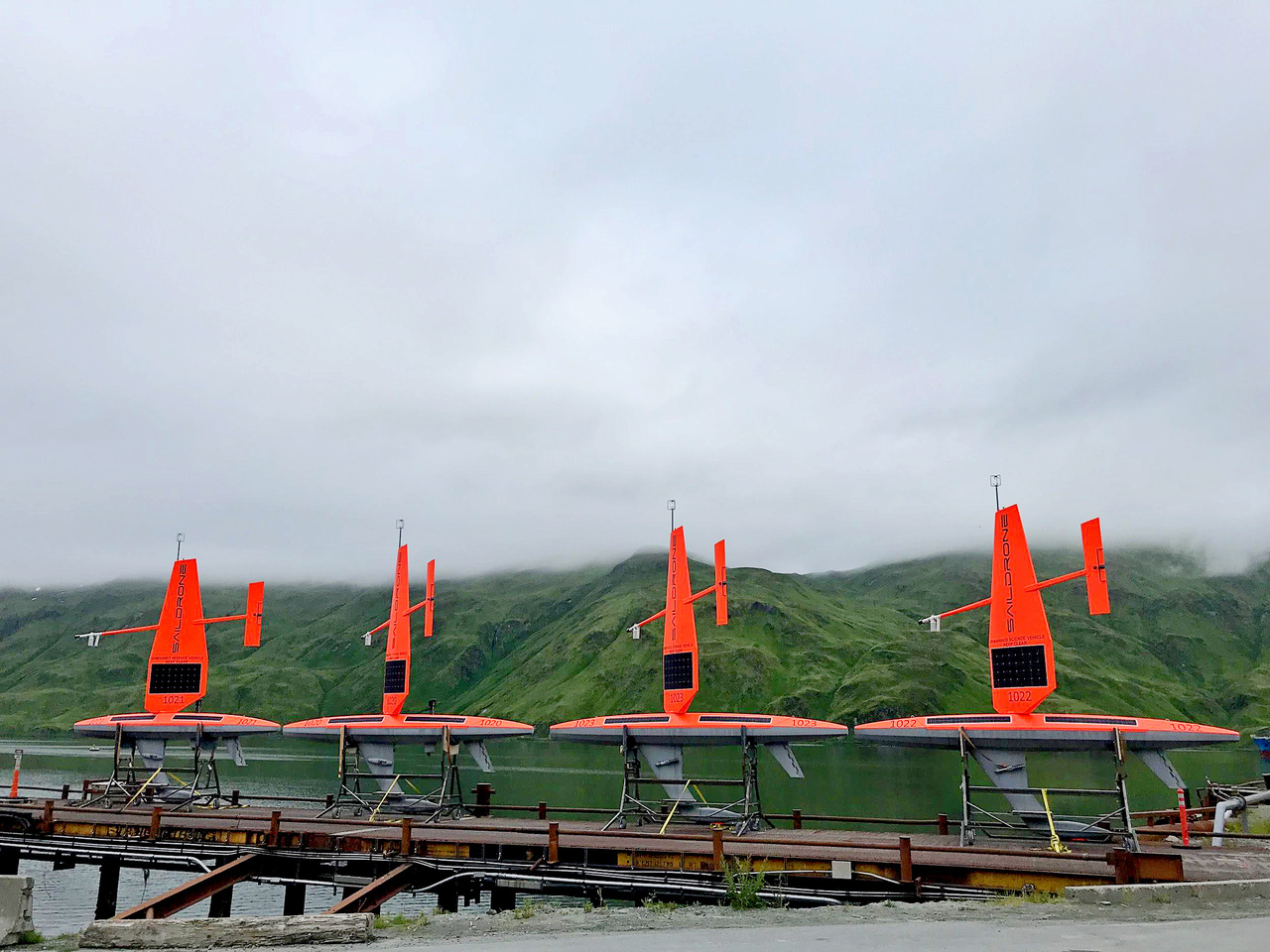 The four Saildrones getting ready for their trip to the Arctic. The platforms, which were built in Alameda, CA, were taken apart, packed, and shipped to Dutch Harbor, AK where they were reassembled

We receive measurements via satellite transmissions, so we can monitor and respond to what the Saildrones see. We can turn instruments on and off or even change where the Saildrones go. Because the Saildrones are operated remotely and use only the wind and sun for power, they are great platforms for working in very remote regions such as the Alaska Arctic. They can travel to these isolated areas under their own power, stay at sea for many months, and cover a lot of ground. Surprisingly little is known about these Arctic ecosystems, in large part because they are remote and it’s costly to work there.

In 2016 and 2017, we worked with a team that installed echosounders (fishfinders) on Saildrones and deployed them in the Bering Sea to measure the abundance of fish in an area where fur seals feed. The echosounder measures fish by transmitting a sound pulse and measuring the sound waves echoing back from fish in the water. By making repeated measurements as it moves through an area, the Saildrone can map the abundance of fish. It is difficult to distinguish different species and sizes of fish with the echosounder, so this works best in areas like the Arctic, where a single species and size of fish dominates fish populations in the water.

We are using echosounders on two of the Saildrones heading to the Arctic this year to determine the amount and distribution of Arctic cod, a fish that just about everything in Arctic waters eats; species of seals, whales, and seabirds depend on them.

One of the main things we’re trying to do is repeat a ship-based survey over the Chukchi Sea that we have been conducting in recent years. What we have learned from this and other work in the area is that there are very high abundances of young Arctic cod about two inches long (i.e. their first year of life) in the Chukchi Sea, but few adults in the area.

We are trying to understand whether this area serves as a nursery ground, with these fish migrating to other areas in the Arctic, or whether these fish don't survive the winter.

Additionally, we know that the environment these fish are living in is undergoing rapid change.  Temperatures have increased substantially. The amount and duration of sea ice has decreased. But, we don't know how this will affect the Arctic cod.

The work this year will add another year of observations to help us understand the impact of the changing environment on the distribution of these fish.

Since they were launched on June 30, the Saildrones have already made it about 100 nautical miles into their journey, ready to start three months of science in the Arctic.

Alex De Robertis is a fisheries biologist at the Alaska Fisheries Science Center's RACE program, where, he conducts and helps to improve methods of acoustic-trawl surveys of fish in Alaska to help manage commercial fisheries.  In recent years, Alex has been working with a great team of scientists and engineers to make acoustic measurements of fish using Saildrones.  This project touches on many of his interests (underwater acoustics, fish surveys, technology development, and sailing), and has really been a lot of fun.

Robert Levine is a graduate student at the University of Washington School of Oceanography, where he uses remote instrumentation to study how changing ocean conditions influence ecology over large areas and long-time scales. His graduate work is focused on the use of acoustic technology to observe the abundance, distribution, and behavior of fish in the Pacific Arctic. For the past few years, he has been working with the echosounders deployed on the Saildrones, and is excited about the opportunity to use these new platforms to venture further and learn more about the Arctic ecosystem.