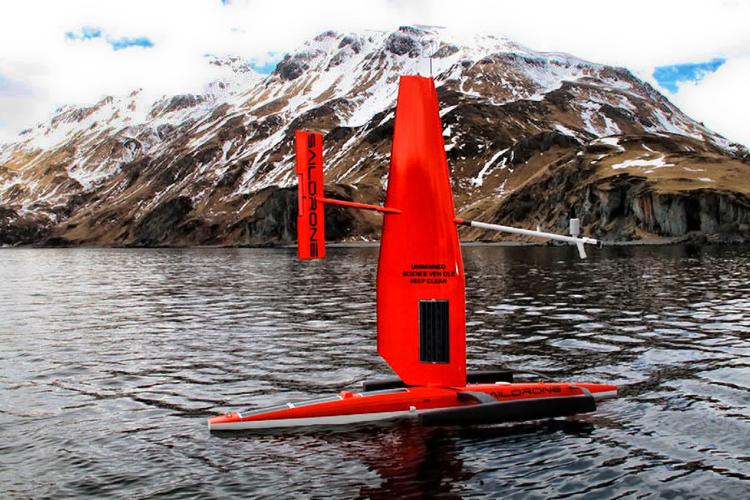 The saildrones each sailed over 3,700 nautical miles while surveying the Chukchi Sea. After 61 days in the Arctic Circle, the drones headed back to Dutch Harbor for the completion of a successful mission.

The primary goal of the saildrone work was to conduct an acoustic survey of Arctic cod over the U.S. continental shelf region of the Chukchi Sea to provide data during a gap-year in ship-based surveys. By using two saildrones, we were able to achieve that goal, and had the flexibility to alter routes as needed and survey additional areas.

Although the drones never made it to deep water at the shelf break due to persistent sea ice in the northern parts of the Chukchi, we were able to use that time to conduct repeat surveys in an area of interest in the central Chukchi. We were also able to re-visit survey lines we had skipped due to ice cover once the ice had retreated. With two platforms, there was redundancy in case of instrument failure, and we could spend extra time in areas where our acoustics equipment indicated a lot of fish. As a bonus, the drones were able to conduct a bathymetric survey in two areas requested by NOAA’s National Ocean Service to provide them with new data on the shape of the seafloor.

We will not know what the acoustic data truly looks like until the data drives are recovered once the saildrones arrive in Dutch Harbor. However, the data summaries we received through satellite communications during the mission made it easier to monitor fish distribution over the survey area and gave us an idea of what to expect from the full dataset.

For example, throughout the survey, fish were much more abundant in areas of warmer temperatures. During the survey, the saildrones surveyed in the cold-water region near the edge of the sea ice in the northern Chukchi Sea, where low levels of backscatter were observed. Temperature clearly plays a key role in structuring Arctic ecosystems.

Temperature (left) and backscatter (right) during the July-August survey of the Chukchi Sea.  Fish appeared to be less abundant in areas with temperatures near or less than 4°C (cool colors).

Months of data processing lie ahead to complete final analysis, but at this point, we consider the mission a great success. This will be our last post. Thanks for reading this blog and following the drones as they explored the abundance and distribution of fish in the high Arctic. It has been a lot of fun, and as detailed below, very successful.

Below is a list of our objectives at the outset and an assessment of how things went.

The saildrones successfully completed two passes of the survey region in the Chukchi Sea. The first survey was completed from mid-July to mid-August using a single drone, and the second from late-August to mid-September by splitting up the route and having one work on the northern portion while the other covered the southern portion.

Completing these survey lines was the main priority, and luckily, sea ice did not inhibit our survey efforts in the Chukchi Sea. Two surveys conducted at two different points in the summer will allow us to make comparisons of the fish distributions at these times. More importantly, having the two surveys conducted by the two saildrones independently is an insurance policy. In the event of an instrument failure, unsuccessful recovery, or other unexpected issue with either drone, a complete picture of the region will be captured even if only one saildrone is returned.

Collect data near the bottom-moored echosounders

Surveys were conducted in the vicinity of three bottom-moored echosounders, which are used to measure seasonal changes in fish abundance. These echosounder moorings were surveyed a total of 9 times over the course of the mission. These visits will provide some spatial context for the long-term observations collected by the mooring.

Backscatter along the mooring mini-surveys conducted at the central (left) and southern (right) echosounder moorings.

Due to the presence of sea ice we were not able to survey along the shelf break. While this objective was not accomplished, surveying in deep water was a secondary goal for this Saildrone mission.

Saildrone was able to provide us with near-real time summaries of the echosounder data. With these data, we were able to produce automated updates of mapped backscattering for identifying regions of interest. These data were used to create regularly updated maps of fish echoes in the Chukchi Sea, which were used to guide locations for trawl sampling during a cruise on the USCGC Healy.

Identify large-scale patterns of fish migration during the survey

We successfully conducted repeat surveys to examine whether fish distributions shift spatially over the course of the summer as ice retreats.

Careful analysis of the data will be needed to draw firm conclusions. However, in our initial assessment, we see a movement of the fish population to the west, as well as lower fish echoes in the south area near Kotzebue Sound (68 N) later in the summer. 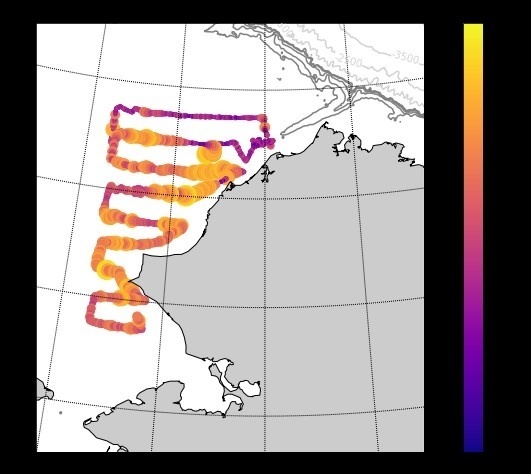 Map of the fish echoes in the Chukchi Sea during the first pass starting in mid-July. 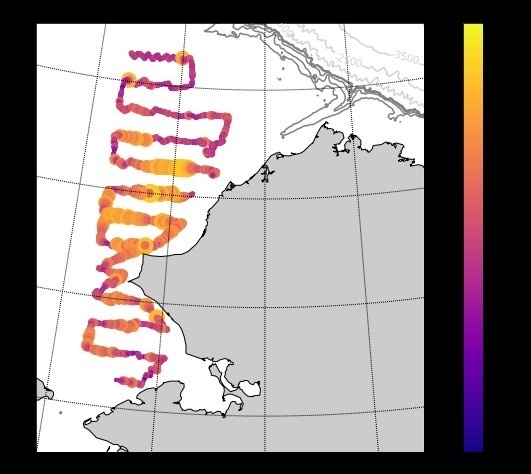 Map of the fish echoes in the Chukchi Sea during the second pass in late August.