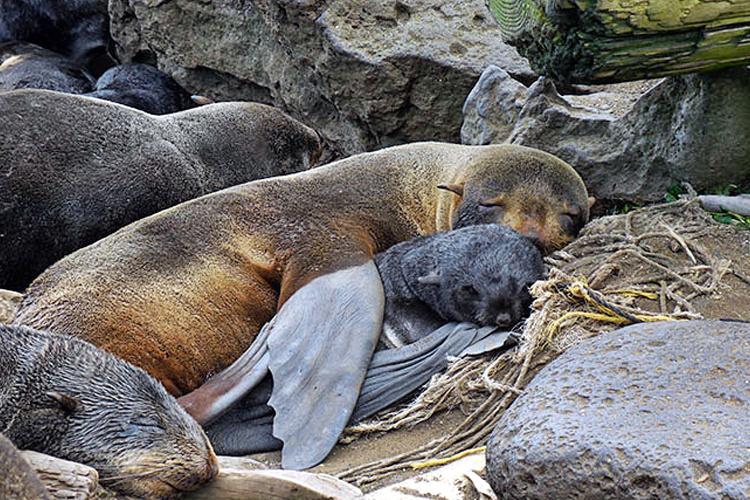 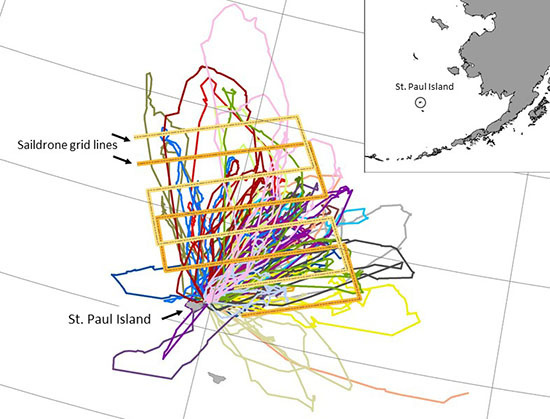 Twenty-two northern fur seals' foraging trips in relation to Saildrones surveying in a grid pattern for walleye pollock. Colored lines outside the grid represent a different fur seal and her movements between July 14 and August 18.

As for the fur seals, I’ve been closely monitoring limited real-time data coming in from the tags glued onto the animals. All tracking instruments continue to send useful information about the fur seals’ movements and dive behavior. Each fur seal has made between three and five foraging trips, alternating time at sea with time on land nursing their growing pup and resting too.

We’ve had the Saildrones following a specific grid pattern because we knew from previous studies that’s where this breeding population of seals feeds. Our earlier research has proved valuable because more than 70 percent of the seals’ foraging trips have been in the area we predicted they’d be, allowing us to learn more about their behavior.

Each animal is a different color line on the map. As you can see, each fur seals’ feeding habits vary. For example, one female, represented by the pink line, traveled more than 165 miles north of St. Paul Island on a six-day foraging trip. Meanwhile, another seal is regularly feeding less than 50 miles from the island, making three to four day trips. 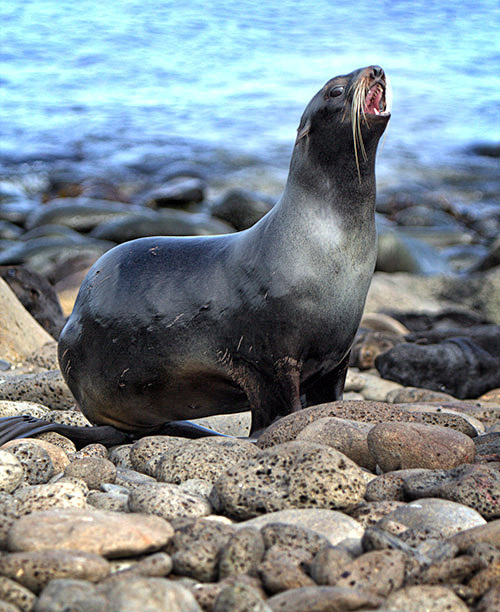 A female northern fur seal calls for her pup just after returning from her foraging trip.

We hope detailed information about fish availability from the Saildrones will give us new insights into why seals have different feeding strategies. We suspect there could be negative consequences for pups whose mothers are gone for extended days because during that time, the pups can’t nurse.

I’m really looking forward to September when I head back to St. Paul Island to weigh the pups, measure their growth and recover the tracking instruments, obtaining a wealth of information stored directly on the tags.

Meanwhile, there is still that smaller group of fur seals not feeding within the grid pattern the Saildrones have been following. We want to learn more about what they are feeding on too. That’s why in the next couple of days we’ll have the Saildrones move farther north and east, where the other animals are traveling.

After that, one Saildrone will make a quick trip east to listen for critically endangered North Pacific Right whales. There are just an estimated 30 left. Then both boats head back to Dutch Harbor, Alaska to end the mission.

The next step will be starting the process of analyzing all the data from the fur seal tags and the devices on the Saildrone. It will take a couple of months for my colleague, fisheries biologist Alex De Robertis and me to process all the information. We are excited to get a better idea of the prey available to the fur seals during these summer months which may help us unravel why this population continues to decline.

I’ll be writing again in a few weeks from the field after we start the recaptures of the tagged females and weigh the pups.